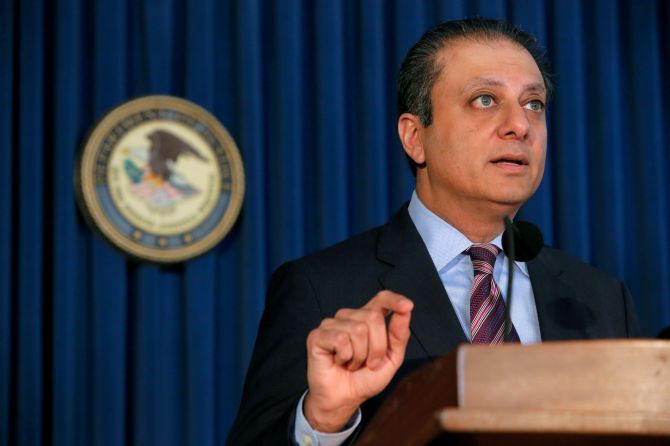 India-born top United States prosecutor Preet Bharara, known for his crusade against corruption, has been "fired" by the Trump administration after he refused to resign.

Bharara and 45 other US prosecutors appointed by former President Barack Obama had been asked by the Trump administration to resign immediately.

"I did not resign. Moments ago I was fired. Being the US Attorney in SDNY will forever be the greatest honour of my professional life," Bharara tweeted, making a reference to his jurisdiction of the Southern District of New York.

Bharara, 48, one of the most high-profile federal prosecutors in the US known for crusade against corruption, had been asked by the acting deputy attorney general a day earlier to immediately submit his resignation.

In a statement later in the day, Bharara said, "Serving my country as US Attorney here for the past seven years will forever be the greatest honour of my professional life, no matter what else I do or how long I live."

"One hallmark of justice is absolute independence, and that was my touchstone every day that I served. I want to thank the amazing people of the Southern District of New York, the greatest public servants in the world, for everything they do each day in pursuit of justice," said Bharara, who in 2013 was at the centre of the controversy related to the arrest of Indian diplomat Devyani Khobragade.

"They (SDNY officials) will continue to do the great work of the Office under the leadership of Joon H Kim, the current Deputy US Attorney, who will serve as Acting US Attorney," he said.

The New York Times reported that Bharara was contacted by President Donald Trump's office a day before he along with 45 other attorneys were asked to resign.

President Trump's assistant had called Bharara's office on Thursday asking the United States attorney in Manhattan to "please call back".

Bharara, however, did not immediately return the call.

He first called attorney general Jeff Sessions's chief of staff Jody Hunt to alert the Justice Department to the call from the president's office and expressed concern about contacts between the President and federal prosecutors, the report said.

Bharara then called Trump's assistant to say he could not speak with the President, citing protocols governing a president's direct contact with federal prosecutors.

The following day, Bharara was among the 46 attorneys asked to resign and immediately clean out their offices.

Sources close to Bharara said that the Manhattan federal prosecutor had refused to submit his resignation, in effect preparing for a showdown with President Trump.

The order by acting deputy attorney general Dana Boente asking the 46 remaining federal attorneys to resign was met with shock by Bharara's office since Trump had last year in November asked him to stay on under his administration.

Bharara had met Trump at the Trump Towers in Manhattan shortly after the Republican won the presidential elections. Talking to reporters following his meeting with Trump, Bharara had said that he was asked by Trump to remain in his current post at the meeting and he had agreed to do so.

"His relentless drive to root out public corruption, lock up terrorists, take on Wall Street, and stand up for what is right should serve as a model for all US attorneys across the country. He will be sorely missed," Schumer said.

Schumer was quoted by as saying that he was "troubled" to learn of the Trump administration's request for Bharara's and other US attorneys' resignations.

"While it's true that presidents from both parties made their own choices for US attorney positions across the country, they have always done so in an orderly fashion that doesn't put ongoing investigations at risk," the New York Democrat said.

"They ask for letters of resignation, but the attorneys are allowed to stay on the job until their successor is confirmed," Schumer said.

Senator Patrick Leahy, Ranking Member of the Senate Judiciary Committee, cast aspersions over the independence of the Justice Department.

"The abrupt, Friday night firing of all remaining US Attorneys -- including Preet Bharara, a well respected, tough prosecutor who the President promised could stay -- is another reminder that the independence of the Justice Department is at risk under this administration," he said.

Leahy noted that the President and Attorney General demanded resignations immediately, not even allowing them to remain until successors are nominated and confirmed.

"The Senate will now have to carefully evaluate the President's selected replacements," Leahy said.

"They will have a high bar to prove they have the necessary courage and fidelity to the law, like Sally Yates, to say 'no' to a President who will need to hear it regularly," he said.

The New York Times report said, "It was unclear whether the president's call on Thursday was an effort to explain his change of heart about keeping Bharara or to discuss another matter." the report said.

Two White House officials were quoted as saying that the promise to keep Bharara on was a product of a chaotic transition process and Trump's desire at the time to try to work with Senator Schumer with whom Bharara is close.

However, the relationship between Trump and Schumer, the Senate minority leader, has since soured, the report said.

Bharara has made a national and international mark for himself with many high-profile cases and investigations including foreign countries, insider trading and those involving US politicians. It was under his prosecution that India-born former Goldman Sachs director Rajat Gupta was convicted for insider trading in 2012.

Bharara has served seven years as the US attorney for the Southern District of New York, a jurisdiction that includes the Trump Tower.

Yoshita Singh and Lalit K Jha
© Copyright 2021 PTI. All rights reserved. Republication or redistribution of PTI content, including by framing or similar means, is expressly prohibited without the prior written consent.