A day ahead of his inauguration as the 45th President of the United States, Donald Trump on Thursday said he is going to unite the country as he promised the Americans to work hard and turn things around. 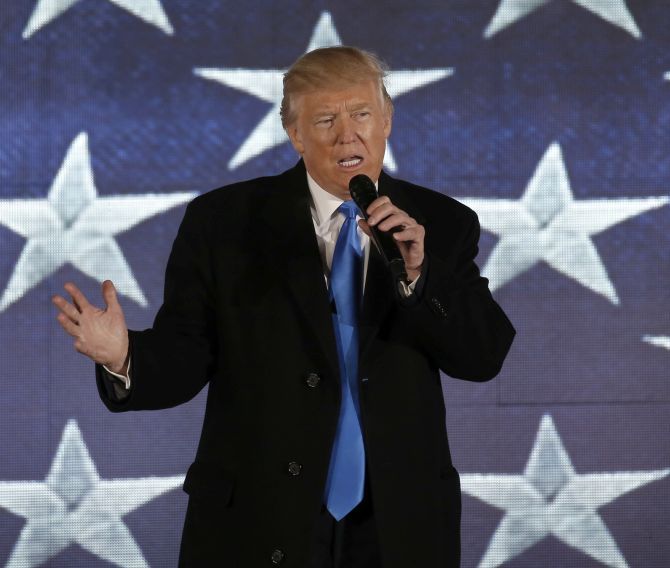 Speaking to the cheering crowd comprising of young military personnel and veterans among common people, Trump assured that things will change in America for the good under his leadership. IMAGE: The US Army Band performs during the function. Photograph: Mike Segar/Reuters

He reiterated his campaign promises of bringing jobs back and strengthening the military and the country's borders.

While arriving at the Lincoln Memorial with his wife, the President-elect stopped in front of the towering statue of Abraham Lincoln and gave a salute to the former US President.

Earlier, the official inaugural activities began with Trump and Vice President-elect Mike Pence laying a wreath at the tomb of the unknown soldiers in a sombre ceremony at the Arlington National Ceremony. Trump's family stood at a distance as he paid his respects to the American soldiers who have paid the ultimate sacrifice for the nation in the line of duty. Trump thanked the American people for their support during his journey to the White House that began 18 months ago, saying he was "just a messenger" for the people who had become tired of the way things were moving forward in Washington and across the country.

"We were tired of seeing what was happening. We wanted real change, and I so look forward to tomorrow. We are going to see something amazing," he said.

Referring to the crowd, he said people are pouring into Washington by the "thousands and thousands".

He said thousands turned up at the Lincoln Memorial for the "small little concert", which is unique in itself. IMAGE: Trump and his wife Melania at the concert. Photograph: Jonathan Ernst/Reuters

He also pointed out that during the last month of the presidential campaign thousands of people participated in his rallies.

Noting that a lot of people did not give his campaign much of a chance in the beginning, he said it was clear that something was happening in its last month.

"The polls started going up. They didn't want to give us credit," he said assuring the American people that they will not be "forgotten anymore".

"I will be cheering you on. What we have done, it's so special. All over the world they are talking about it. We are going to make America great again and greater than ever before," Trump said. 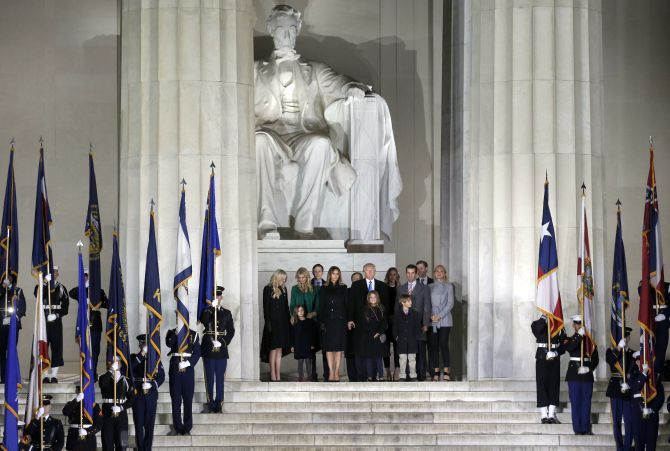 As the concert concluded, the Trump family waved to the crowd from the stage before departing from the venue.

Indian-American DJ Ravidrums, who opened the concert with his percussion performance before Trump arrived, took the stage a second time, performing before the President-elect.

The concert was held at the Lincoln Memorial, an imposing historical monument that houses the 170-ton seated statue of the 16th President of the United States Abraham Lincoln.

The inaugural event began with full American pageantry and patriotic fervor, celebrating the nation's democratic tradition of the peaceful transition of power from one administration to the next.