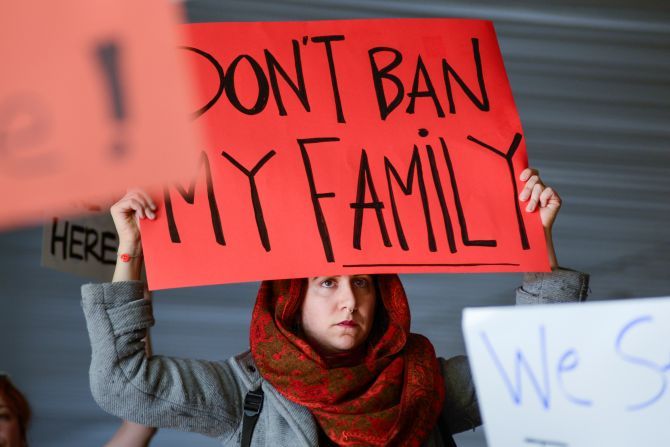 President Donald Trump’s controversial immigration order against people from seven Muslim-majority countries hit a roadblock on Sunday as a United States judge issued an emergency order, temporarily barring authorities from deporting refugees and other visa holders who have been detained.

US District Judge Ann Donnelly in New York issued the emergency order after the American Civil Liberties Union filed a petition on behalf of two Iraqi men detained at the John F Kennedy International Airport as the immigration ban took effect triggering protests at major airports across the country.

Judge Donnelly, who was appointed by former President Barack Obama, ordered that the government could not remove ‘individuals with refugee applications approved by US Citizenship and Immigration Services as part of the US Refugee Admissions Programme, holders of valid immigrant and non-immigrant visas, and other individuals from Iraq, Syria, Iran, Sudan, Libya, Somalia and Yemen legally authorised to enter the United States’.

The judge ordered the government to provide lists of all those detained at US airports since the measure went into effect.

The judge said that sending those travellers back to their home countries following Trump’s order exposes them to ‘substantial and irreparable injury’.

The order barred US border agents from removing anyone who arrived in the US with a valid visa from Iraq, Syria, Iran, Sudan, Libya, Somalia and Yemen. It also covered anyone with an approved refugee application.

President Trump yesterday ordered ‘extreme vetting’ of people entering the US from seven Muslim majority countries and banned the entry of Syrian refugees until further notice, as part of new measures to ‘keep radical Islamic terrorists’ out of America.

The controversial move, signed a week after he was sworn-in as the President, fulfils the vow Trump made on the campaign trail to limit Muslim immigration to the US.

Welcoming the federal judge’s ruling, ACLU’s Immigrants’ Rights Project Deputy Director Lee Gelernt said, “This ruling preserves the status quo and ensures that people who have been granted permission to be in this country are not illegally removed off US soil.”

“Judge issued stay on Muslim ban, said no one could be removed/sent back. But unclear what will happen to those detained,” said ACLU executive director Anthony D Romero.

Clearly the judge understood the possibility for irreparable harm to hundreds of immigrants and lawful visitors to this country, he said.

“Our courts today worked as they should as bulwarks against government abuse or unconstitutional policies and orders. On week one, Donald Trump suffered his first loss in court,” he added.

Earlier in the day, Trump has asserted that his 'very strict ban' on foreign nationals from seven Muslim-majority countries was working ‘very nicely’ and should continue.

New York City’s Kennedy airport became a scene of anguish and desperation for the families of people detained after arriving in the US from nations subject to the travel ban.

Many flights to the US from countries subjected to the ban were already in the air on Saturday when the President’s order barred entry to their citizens.

Trump, however, denied that barring refugees from several predominantly Muslim nations amounted to a ban on Muslims.

“It’s not a Muslim ban, but we are totally prepared,” Trump said.

But the lawyers and advocates working at the NYC airport said they didn't have a hard count on the number of people taken into custody after getting off their flights.

The detainees included two Iraqis who had previously been given permission to come to the US because of their ties to the US military.

Terming it a ‘painful’ decision, Pichai said the move will affect at least 187 Google employees.

Indian-American Microsoft CEO Satya Nadella posted a note on LinkedIn, saying the company ‘will continue to advocate on this important topic’.

He said as an immigrant and the company’s CEO he had ‘both experienced and seen the positive impact that immigration has on our company, for the country, and for the world’.

‘We share the concerns about the impact of the executive order on our employees from the listed countries, all of whom have been in the United States lawfully, and we're actively working with them to provide legal advice and assistance,’ the company said in a statement.

The company said it was aware of 76 employees who belonged to the seven banned countries mentioned in the order.

Zuckerberg has also criticised the decision to severely limit immigrants and refugees from certain Muslim-majority countries, saying America is a nation of immigrants and should be proud of it.

‘Like many of you, I’m concerned about the impact of the recent executive orders signed by President Trump,’ Zuckerberg wrote on his Facebook page.