News
Business
Movies
Sports
Cricket
Get Ahead
Money Tips
Shopping
Sign in  |  Create a Rediffmail account
Rediff.com  » News » US withdraws from UNESCO for its 'anti-Israel' bias The United States on Thursday announced it will withdraw from the United Nations Educational, Scientific and Cultural Organisation, accusing the UN cultural body of 'anti-Israel' bias and cited the need for 'fundamental reform' in the organisation.

The withdrawal will take effect on December 31, 2018. The US will remain a full member of the Paris-based UNESCO until then.

"This decision was not taken lightly, and reflects US concerns with mounting arrears at UNESCO, the need for fundamental reform in the organisation, and continuing anti- Israel bias at UNESCO," State Department Spokesperson Heather Nauert said in a statement.

She said the Department of State today notified UNESCO Director-General Irina Bokova of the US decision to withdraw from the organisation and to seek to establish a 'permanent observer' mission to UNESCO.

"The US indicated to the Director General its desire to remain engaged with UNESCO as a non-member observer state in order to contribute US views, perspectives and expertise on some of the important issues undertaken by the organisation, including the protection of world heritage, advocating for press freedoms, and promoting scientific collaboration and education," Nauert said.

Bokova voiced 'profound regret' over the US decision, calling it a 'loss to multilateralism'.

'After receiving official notification by the US Secretary of State, Rex Tillerson, as UNESCO Director-General, I wish to express profound regret at the decision of the US to withdraw from UNESCO,' Bokova in a statement.

She said that at the time when conflicts continue to tear apart societies across the world, it is deeply regrettable for the US to withdraw from the UN cultural body promoting education for peace and protecting culture under attack.

In 2011, under the Obama administration, the US cut off its budget contribution to the agency in protest at its acceptance of Palestine as a member-state.

President Donald Trump has criticised what he called a disproportionate contribution by the US to UN institutions.

The US funds 22 per cent of the UN's regular budget. The US withdrawal is also motivated by a desire to save money, the Foreign Policy magazine reported.

This is not the first time the US has withdrawn from the agency.

The Ronald Reagan administration quit the organisation in the 1984, and the US rejoined it in 2002 under the George W Bush administration, the magazine said.

Paris-based UNESCO, which began work in 1946, is known for designating World Heritage sites. 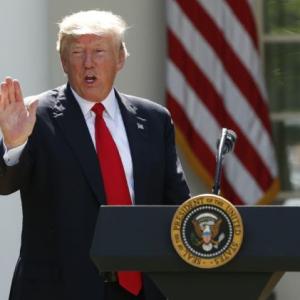 Trump withdraws from Paris Accord, says India, China get advantage 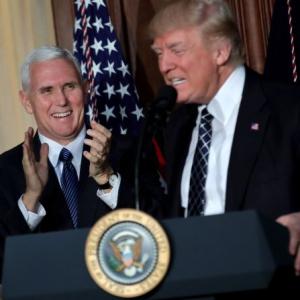