Trump to temporarily suspend immigration to US over coronavirus

United States President Donald Trump has said that he will sign an executive order to temporarily suspend all immigration to the US to "protect" the jobs of Americans and to fight the "invisible attack" on the country by the coronavirus, a move that was widely criticised by the Democrats, including Indian-origin Senator Kamala Harris. 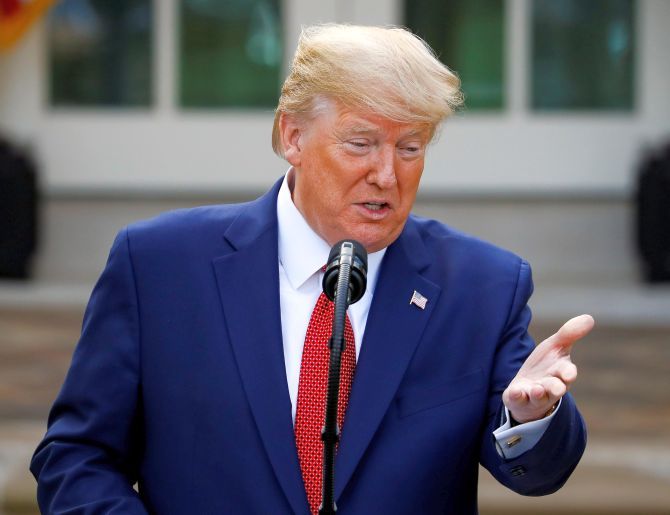 IMAGE: US President Donald Trump speaks during a news conference in the Rose Garden of the White House in Washington, DC. Photograph: Reuters

The coronavirus outbreak has killed more than 42,094 people in the US, the country with the most fatalities in the pandemic, according to Johns Hopkins University, and more than 750,000 cases have been confirmed.

"In light of the attack from the Invisible Enemy, as well as the need to protect the jobs of our GREAT American Citizens, I will be signing an Executive Order to temporarily suspend immigration into the United States!” Trump, a Republican, seeking reelection in the November presidential poll, said in a tweet late on Monday.

Details of Trump's executive order were not immediately known. He also did not indicate when he would sign such an order.

The president's announcement comes as his administration seeks to reopen parts of the US from the crippling COVID-19 shutdown.

However, the NBC News reported that the move "had been under consideration for a while," a senior administration official was quoted as saying by the report.

The official said that the details about how the plan would be implemented and how many countries would be affected "will be forthcoming," the report added.
Immigration has long been an issue of President Trump. He has been calling for a merit-based immigration system.

Since the pandemic began, the administration had already restricted foreign visitors from China, Europe, Canada and Mexico. And also suspended all routine visa services, both immigrant and non-immigrant, around the world due to the global coronavirus pandemic.

California's Indian-origin Democratic Senator Harris said the president was taking advantage of the situation to push his hard-line immigration policies.

"Trump failed to take this crisis seriously from day 1. His abandonment of his role as president has cost lives. And now, he's shamelessly politicising this pandemic to double down on his anti-immigrant agenda," Harris tweeted.

Democrat Joaquin Castro tweeted that, "This action is not only an attempt to divert attention away from Trump's failure to stop the spread of the coronavirus and save lives, but an authoritarian-like move to take advantage of a crisis and advance his anti-immigrant agenda."

"This is not about the policy. It is about the message the president wants to send. He wants people to turn against 'the other.' And, regardless of the valuable contributions immigrants are making to the response and recovery, he sees immigrants as the easiest to blame," Ali Noorani, the executive director of the National Immigration Forum, was quoted as saying by CNN.

While Trump talked about suspending immigration visa, the H-1B visa, which is more popular among Indian IT professionals, is a non-immigrant visa. But his reasoning that he needs to protect jobs of American citizens indicates that non-immigrant work visas too might be on his target.

The United States, due to coronavirus, has experienced a record layoff. As off last week, a record number of 22 million Americans have applied for unemployment benefits.

The world's largest economy's growth has come to a standstill due to the coronavirus pandemic.

Trump has already closed the Northern and Southern border that attracts a large number of illegal immigrants. Travel restrictions and closing of consulate services in many countries including India are already having an impact on issuing of new H-1B visas.

Globally, more than 2.4 million people have been infected with the virus and over 165,000 killed, according to the university tracker.