US-Taliban deal more a 'withdrawal agreement' than a peace deal

'Americans, after 18 years of war in Afghanistan, have got tired and they want to withdraw for their domestic reasons' 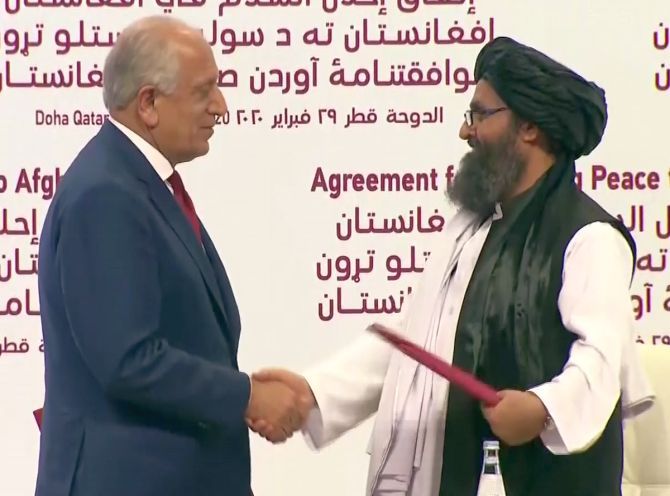 The long-anticipated deal signed between the United States and the Taliban is a "withdrawal agreement" rather than a peace agreement, experts said on Sunday, further fearing that it is more or less a compulsion for President Donald Trump to secure a win in the 2020 presidential elections.

After 18 months of talks and nearly 20 years of war, the Taliban and the US have signed a deal aimed at paving the way for peace in Afghanistan and the departure of foreign troops.

"He (Trump) wants to win the 2020 (elections) at all costs and this is a step that is taken in that direction. When he became the President in 2016, he had then said that he'll get the boys (American troops in Afghanistan) home and withdraw 5,000 troops out of 12,000 within a period of 14 months, provided that the Taliban does not infringe on the agreement," defence expert PK Sehgal said.

Pointing out that America has spent more than a trillion dollars on the long-drawn war and has lost more than 2,500 people in Afghanistan, Sehgal added that both the Americans and the Taliban are fatigued by now.

"This is not the peace agreement but the withdrawal agreement. A peace agreement would have been there had there been a genuine expectation that there would be peace in Afghanistan. The Taliban haven't made any major concessions to America. Neither have they talked to the Afghan government. They have only promised they would talk to the government. However, nobody knows what the future holds," Sehgal said.

Former diplomat Dilip Sinha also reiterated that the Americans, after 18 years of war in Afghanistan, have got tired and they want to withdraw for their domestic reasons.

"It's not that they have lost the war but also they have not won the war as they are not able to decimate the Taliban completely," he said.

As per a joint declaration between Washington and the Afghan government, the US will withdraw all its forces from Afghanistan within 14 months.

The plan is "subject to the Taliban's fulfilment of its commitments under the US-Taliban agreement".

Meanwhile, former diplomat Ashok Sajjanhar further noted that America has been quite desperate in taking its forces out of Afghanistan.

"They have spent trillions of dollars in the war-torn country and the US President has also called it an unnecessary war. The agreement means that out of the total 13,000 troops present there, around 4,500 troops will be withdrawn within 135 days. The remaining 8,600 forces will leave within some finite period of time which has not been discussed," he stated.

However, the diplomat said there are very many uncertainties in the process as well, the most important being that the democratically elected government in Kabul has not been involved in this process.

"One of the conditions now will be that the Taliban will have to undertake negotiations and talks with the Ashraf Ghani government in Kabul and with the other Afghan forces to ensure a long-term political settlement that is reached," he stated.