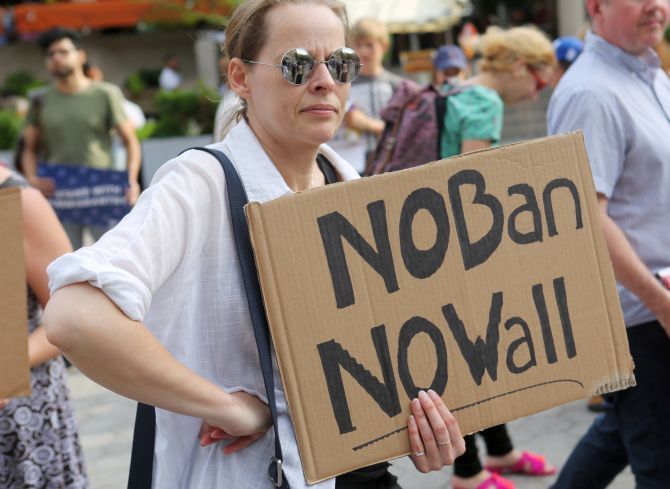 IMAGE: A protester holds a sign reading "No Ban, No Wall" at a protest against US President Donald Trump's limited travel ban. Photograph: Joe Penney/Reuters

The United States Supreme Court on Tuesday upheld Donald Trump’s controversial travel ban targeting people from several Muslim-majority countries, a big win for the US president, who welcomed the ruling with a “Wow!”

The travel ban had restricted the entry of people from Iran, North Korea, Syria, Libya, Yemen, Somalia and Venezuela. Chad was originally on the list but it was recently removed after having met baseline security requirements.

Trump had announced his first travel ban aimed at seven countries, just a week after he took office in January 2017, triggering a global uproar.

Lower American courts had deemed the ban unconstitutional, but the US top court reversed this decision in a 5-4 ruling announced on Tuesday.

The Supreme Court ruling marks the first major high court decision on a Trump administration policy. It upholds the selective travel restrictions, which critics called a discriminatory “Muslim ban” but the administration argued was needed for security reasons.

In a statement, he described the ruling as a “tremendous victory for the American People and the Constitution. The Supreme Court has upheld the clear authority of the President to defend the national security of the United States.”

“In this era of worldwide terrorism and extremist movements bent on harming innocent civilians, we must properly vet those coming into our country. He said the ruling is also a moment of “profound vindication” following months of “hysterical commentary” from the media and Democratic politicians who refuse to do what it takes to secure the border and the country.

“As long as I am President, I will defend the sovereignty, safety, and security of the American People, and fight for an immigration system that serves the national interests of the United States and its citizens. Our country will always be safe, secure, and protected on my watch,” Trump said.

The ruling was along partisan lines, with Chief Justice John Roberts writing for the conservative majority.

Chief Justice Roberts wrote the opinion, which said the travel ban was “squarely within the scope of Presidential authority”.

“The government has set forth a sufficient national security justification to survive rational basis review. We express no view on the soundness of the policy,” the top judge wrote.

Associate Justice Sonia Sotomayor was among the apex court’s four liberals that wrote a dissent.

“This repackaging does little to cleanse [the policy] of the appearance of discrimination that the president’s words have created,” she said.

“Based on the evidence in the record, a reasonable observer would conclude that the proclamation was motivated by anti-Muslim animus,” she said.

“Today’s decision is critical to ensuring the continued authority of President Trump -- and all future presidents -- to protect the American people,” Sessions said in the statement.

Human rights organisation Amnesty International said the  ban, and the anti-Muslim sentiment in which it originated, has “no place in a country that claims to value human rights.”

“While this decision doesn’t address the separate and equally harmful ban on refugees, it cruelly traps people in conflict-afflicted countries and prevents them from seeking safety in the US or being reunited with family,” CNN quoted Mace as saying in a statement.

Director of the American Civil Liberties Union Immigrant Rights Project Omar Jadwat said in a statement that the ruling was one of the Court’s “great failures”.

“The court failed today, and so the public is needed more than ever. We must make it crystal clear to our elected representatives: If you are not taking action to rescind and dismantle Trump’s Muslim ban, you are not upholding this country’s most basic principles of freedom and equality.”

Jadwat likened the Court’s decision to the ruling which upheld Japanese-American internment during World War II.

US Supreme Court lawyer Neal Katyal, who represented the state of Hawaii and other challengers in the Supreme Court case involving Trump’s travel ban, said he’s disappointed with the decision.

The Indian-American lawyer also warned US President Trump not to take the ruling as “approval to continue attacking our Constitution.”

Senate Majority Whip John Cornyn, a Texas Republican, said the Supreme Court’s ruling is a big win for Trump, and disputed critics who said that the ban is not targeting Muslims, arguing it’s been mischaracterised by critics as a Muslim ban.

“This is part of the Never Trump resistance to mischaracterise this as being a Muslim ban, this is not a Muslim ban,” he said.