US states to celebrate October as Hindu Heritage Month

Several United States states, including Texas, Florida, New Jersey, Ohio and Massachusetts, have proclaimed October as the Hindu Heritage Month, noting that Hinduism has 'contributed greatly' to America through its unique history and heritage. 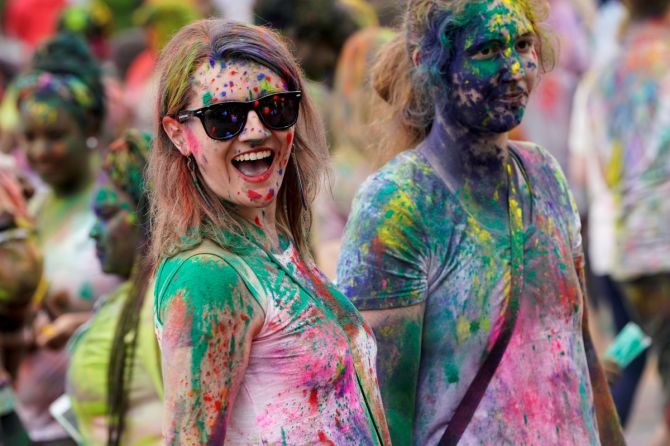 The proclamations came after various Hindu organisations in the US announced the addition of another major festival, an entire month of festivals, in October as the Hindu Heritage Month.

The respective declarations issued recently from the office of the governors of various states, congressmen and Senators noted, 'Communities of the faith have long served as beacons of hope, sharing their beliefs and bettering their communities through service; improving and inspiring the lives of thousands of followers around the world. Hinduism has contributed greatly to our state and nation through its unique history and heritage'.

The Hindu groups in America are now campaigning and striving hard for the declaration of 'Hindu Heritage Month' formally by the US government.

The organisers said they want President Joe Biden to formally declare by an Executive Order the month of October as the Hindu Heritage Month.

'Keeping in with aspirations of the three million strong Hindu-American community and in order to continue to harbour and maintain good relations with India, the motherland of millions of Hindu-Americans, we urge you (the president) to formally declare by an Executive Order the month of October as the Hindu Heritage Month,' they said.

'It's high time to educate the world on our philosophy and ethos.'

He said by mid-July the VHPA along with other Hindu groups had sent over 20 letters to state government heads, requesting for proclamation of October as Hindu Heritage Month.

The Hindu Heritage Month celebration will showcase the diversity that is so fundamental to Hindu civilisation.

'Hindu heritage and culture are thousands of years old; it is our duty to share it with the world and pass it onto our next generations for them so that they take pride in their roots,' said Sanjay Kaul, vice president of the World Hindu Council of America, one of the organisers of this event.

According to the organisers, the celebrations will include cultural programmes, fashion shows, webinars, multi-day conferences, walkathons and more. These events will follow the Covid protocol and will be both in- person, as well virtual.

Dr Jai Bansal, World Hindu Council of America vice president, underscores the fact that the Hindu community is, by nature, rather unassuming. However, with second and third generations now making their mark in their adopted lands, the time has come for the Hindu community to come out of their shell and talk about its rich cultural heritage and important role in making the multitude of contributions to every aspect of the fabric of the adopted lands.

Welcoming the decision of the organisers to hold the month-long event, Hindu Student Council president Arnav Kejriwal said, 'The American experience is all about sharing and learning each of our unique cultures, traditions and histories.'

'We will get to see so many communities graciously tell their unique stories in the course of a dedicated history and awareness month, and I am ecstatic about the prospect of seeing the Hindu American community offering our own stories in return,' Kejriwal said.

Putting the celebration in perspective, VHPA general secretary Amitabh VW Mittal said there is no single book that one can consult to get what the Hindu philosophy is, as it is constantly evolving and its contribution to human civilisation is unmeasurable.

The vibrancy of Hinduism, in fact, runs the risk of it being misinterpreted, he said, adding that the Hindu Heritage Month will give an opportunity to the world to understand how open and free the Hindu philosophy is, 'which is quite often limited and misrepresented by the tag 'religion''.

According to the president of Hindu University of America, Kalyan Viswanathan, 'The Hindu Heritage Month is a great opportunity for the Hindu community to remember our collective journey so far -- from the ancient Vedic times, our own golden eras, through the trials and tribulations of conquests and colonisation -- and look optimistically forward at the opportunity we have for recovering and rearticulating the Hindu worldview for future generations.'

General Secretary of the Coalition of Hindus of North America (COHNA) Shobha Swami made a point about the diversity of the culture that is going to be celebrated the whole of October.

'Multi-generational Hindus from different parts of the world who call the US their home adds to the colour of the ethnic tapestry here.

'They would like to showcase their vibrancy in arts, dance, music, yoga, meditation, mindfulness, ayurveda and food in all its richness for this month-long celebration in October,' she said. Indian Americans: Liberal in US, conservative in India