US: Sikh woman arrested for killing her mother-in-law

A pregnant Sikh woman in a northern California city been arrested on charges of killing her mother-in-law who died of "blunt force trauma" to the head.

Baljit Kaur, 68, was found dead at her residence in Yuba City on October 24. According to preliminary autopsy results she died of "blunt force trauma" to the head, the police said.

"The police on Friday arrested her daughter-in-law, Baljinder Kaur, 37, on charges of killing Baljit," the Sutter County Sheriff's Office said in a statement, adding that there is no other suspect of this gruesome murder case.

The bizarre incident sent shock waves in Yuba City that has highest concentration of Sikhs in the US.

"After an intense investigation by Sheriff's Detectives, significant evidence has been recovered and statements obtained resulting in an arrest," the statement said.

Baljinder, now behind bars, is pregnant of about six months and told the police that she is due to deliver sometime in January. She is scheduled for arraignment on October 30 in Sutter County Superior Court.

North American Punjabi Association in a statement termed it as an unfortunate incident and that these kinds of happenings is a blot on the glorious history of the community.

According to police, Baljinder has no known criminal history. She and her husband have a five-year-old daughter. 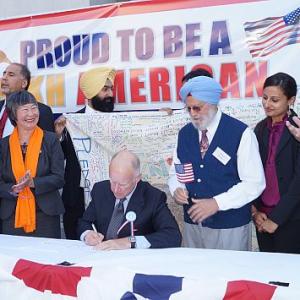