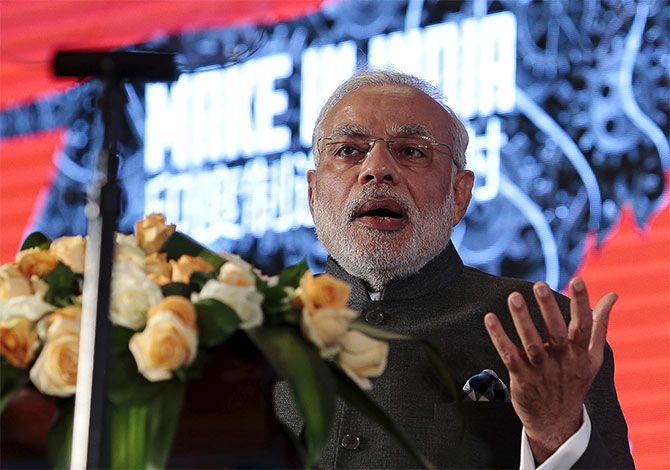 A scathing indictment of India's human rights violations by a bipartisan group of senior United States senators must have been the last thing the pro-India lobby, friends, supporters and well-wishers of India -- not to mention the Government of India -- would have expected days before Prime Minister Narendra Modi's fourth visit to the US.

But that is exactly what transpired at a hearing convened by the powerful Senate Foreign Relations Committee, billed as 'US-India Relations: Balancing Progress and Managing Expectations,' where India was raked over the coals for everything from human trafficking to gender violence and discrimination and persecution of minorities and religious freedom issues to slavery. Yes, slavery.

Committee chairman Senator Bob Corker, Tennessee Republican, who, two days ago, met the presumptive presidential nominee Donald Trump, and was being touted as a possible vice-presidential running mate for Trump, firing the first salvo, said, 'I would say that while this committee has been unanimously supportive of an end modern day slavery movement, the United States also believes that India has the largest number of slaves.'

'Do they have zero prosecution ability, zero law enforcement? How could this happen on such a scale? It's pretty incredible,' he added.

'It's a huge challenge in this massive country to deal with the issues with uniform capacity and capability to address the rights of every individual,' Assistant Secretary of State of State for South Asian Affairs Nisha Desai Biswal, who was testifying before the committee, argued.

'We do think there is a lot more that can and should be done to address the issues of trafficking,' she said.

'I would say the awareness is increasing and there is a commitment at the national level to deal with these issues,' Biswal, to her credit, putting up a stout defence, added, 'and we have seen them break up trafficking rings in places like Chennai.'

'But,' she reiterated, 'There is a long way to go and there is an economic reality that is going to incentivise, unfortunately, the existence of such kind of criminal network. It will be increasingly incumbent upon India to advance the rule of law across all aspects of its society to ensure that such conditions and these kinds of trafficking do not exist.'

'We are committed to support these efforts and to be a partner in that endeavour,' Biswal said. 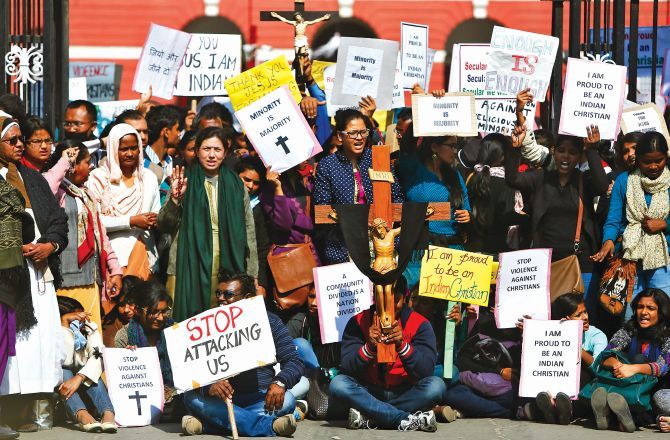 IMAGE: A protest outside a church in New Delhi in February 2015. Christian protesters were then demanding better government protection amid concern about rising intolerance after a series of attacks on churches.

Corker, apparently unconvinced, told Biswal, 'I get the feeling, listening to your testimony, that some of the concerns on both sides (Republicans and Democrats on the committee) have had is that we are not as brutally honest about our relationship with India as we should be, and it benefits neither them nor us.'

'It just seems that it's a huge country and we see promises there, (but) we don't see much action, but we are not just that honest in our discussions about some of the issues that have been raised here, whether human rights, slavery, or lack of intellectual property issues, that have been brought up,' he said.

Corker also bemoaned the US-India nuclear deal being in limbo vis-a-vis implementation, eight years after its signing, saying, 'it never materialised in anything that mattered yet.'

'Long time ago,' he recalled, 'one of the first votes I made in the Senate was in favour of the deal.'

'So, do we just walk around these issues with India and hit them on the edges, but have a fear about fully addressing the issues head-on with them?' Corker asked Biswal.

'I would actually take exception with that characterization, Mr Chairman,' Biswal asserted, 'because I do believe that we have a very robust, a very honest and very transparent discourse.'

What 'the (Obama) administration seeks to do is to find the places where our engagement on these issues can have the kind of results and actions that, in a constructive way, we would like to see,' Biswal said.

'That's not to say that we don't engage in a candid and brutally honest conversation,' Biswal acknowledged. 'Our human rights report, our religious freedom report, our Trafficking in Persons report, lays bare in a very clear and detailed terms the concerns that we have and the assessments that we make, and these are conveyed and communicated very clearly to the government of India, and the Indian people at large.'

'That said,' Biswal noted, 'we do have a desire to advance this relationship in a way that, I think, is going to be increasingly important to both our countries, to both our peoples, to both our economies.'

The ranking Democrat on the committee, Senator Ben Cardin of Maryland and other members, obviously lobbied strongly by the likes of the US Commission on International Religious Freedom, Christian and Sikh American groups, and NGOs like Human Rights Watch, brought up human rights issues and assailed New Delhi, not reminiscent in recent years following the exponential growth of the US-India strategic partnership.

While there was certainly an appreciation by virtually all the members of the committee of the galloping US-India defence and military relationship, counter-terrorism and intelligence cooperation, climate change rapport and India's support for the US-led effort in Paris, the likes of Cardin made remarks such as, 'This is a democratic ally, a friend, but are we being candid with them with regard to what is expected regarding issues like trafficking?'

'Absolutely, we are being candid,' Biswal shot back. 'Ultimately it is an issue of Indian capacity to address the very large complex networks...'

Before she could complete her sentence, Cardin also brought up the 'anti-conversion laws,' which, he said, 'are also problematic to how they are dealing with religious freedom.'

'We have specific dialogues that focus on human rights, trafficking, and religious freedom issues, including our Global Issues Forum at the under secretary level, where we go through in great detail in the areas of concern,' Biswal said.

She informed the senators that 'in the way we do our diplomacy, we make clear the values that we stand for in ensuring we are engaging all communities and ethnicities and religions in India -- that we are engaging with civil society as a core component of the relationship.'

'And we look to partner, not only at the national-level, but also at the state-level, where many of these challenges manifest, to see what kinds of solutions, for example, in the specific instance of combating gender-based violence, we know that this is about how local law enforcement improves and acts on an existing stricture,' she said.

'So, we are trying to deepen our cooperation with Indian law enforcement agencies on community policing and creating greater awareness on best practices on how to combat gender-based violence,' Biswal added.

'So, across all these areas, we do try to engage constructively both at the national and the state-level,' she said.

An example of the back and forth on religious freedom and human rights issues -- and the grievances of minorities like Sikhs -- that transpired at the Senate Foreign Relations Committee hearing on India.

This is between Senator Tim Kaine, Virginia Democrat, and Assistant Secretary of State Nisha Desai Biswal, during which Kaine strongly brought up the denial of visas for members of the US Commission for International Religious Freedom to visit India on a fact-finding mission.

Kaine: The Indian government denied visas to American researchers in March, who were going as part of the US Commission on International Religious Freedom. These were researchers who worked to prepare the annual report about religious freedom around the world. That's the most unusual action, isn't it?

Biswal: We certainly would have encouraged them to allow these researchers to travel because we believe it would foster greater understanding, support and dialogue between US CIRF and Indian authorities, and would enable them to have a more comprehensive report and understanding.

Kaine: I was not exactly clear about your testimony; I just was distracted for a second. In the past, have similar researchers been denied visas in India, or have they been allowed in?

Biswal: It is my recollection that we have never been able to gain entry or visas for them to travel to India in successive Indian administrations. That has been a longstanding policy of the Indian government that we have not been able to change.

Kaine: What has been the general policy with respect to other nations' willingness to grant visas to researchers from the US commission?

Biswal: I suspect that it is a mixed and uneven record, but I can't tell you definitively what it is across the board.

Kaine: The 2015 report of the commission was pretty hard on India and in fact on India's -- I think in their conclusion -- sort of declining religious tolerance or, maybe, as you said, the reversed increased instances of sectarian tension and disturbances, as I recall.

Biswal: I believe that is correct.

Kaine: From my constituents, I have a very vibrant Indian-American community in Virginia, as you know, including a pretty active Sikh community. The Sikh community, in particular, has expressed a lot of concerns about Indian governmental response, for example, to desecration of Sikh religious texts and sites in certain parts of the country and what they view as an inadequate government response to that. Has your office been following those concerns as well?

Biswal: We have been and we have also engaged with the Sikh community here in the United States.

Kaine: I met with the Indian ambassador to the United States in recent months to talk about this and shared my very significant concern about it, and I think the message was delivered.

I think the explanation was, during election seasons, sometimes such things can happen and after the election season, tensions abate a little bit, but I wasn't completely satisfied with that answer, and I consider myself a strong supporter of this bilateral relationship.

Biswal: There has been a fairly vigorous and vociferous debate within India with respect to issues of religious freedoms and religious tolerance.

Kaine: This is an issue that, I think, is a really important one for us to stay up on and we are going to have the opportunity, which I really look forward to, to have the prime minister in Washington soon, but it is India's status as secular democracy, as you described, that is a really important one, but you got to have that status if people don't feel like they are going to be hurt or punished for how they choose to worship.

Biswal: If I may comment, Senator, my own perspective on this issue is that there is no more robust voice than the voice of the Indian people that is taking up these issues with increasing vigor and public debate.

It is on the headlines of Indian newspapers that you are seeing a very active engagement on this issue. I think these are issues and these are values that we hold very dear that we bring into the conversation, but we try to do it in as constructive a way as possible to not take away from the fact that these are issues that Indians must grapple with and get right for their own country, for their own democracy, for their own society; and that we, in the United States, have experiences to share, lessons to share, best practices to share, but we seek to do that in a way that respects and honours the fact that this democracy has a very vibrant and very vocal civil society and media and political party system that is also trying to get this right.

Kaine: That has certainly been my experience as I visited. A heartening aspect of India today is that (there is) a vibrant civil society that is not shy at all about raising these issues.