US Secretary of State John Kerry on Wednesday called on Prime Minister Narendra Modi and shared with him US' perspective on developments in the region and beyond. 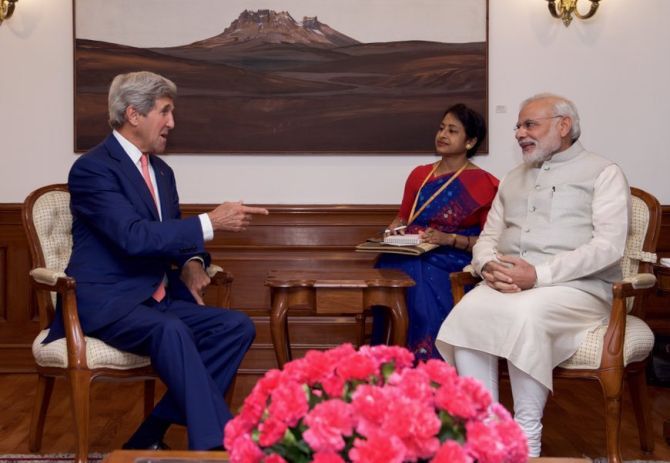 Kerry, along with US Secretary of Commerce Penny Pritzker, also discussed progress in bilateral engagement since Prime Minister's visit to US in June 2016 apart from briefing him on the 2nd India-US Strategic & Commercial Dialogue that concluded on Tuesday, according to a PMO release.

"Secretary Kerry also shared US perspective on developments in the region and beyond with prime minister," it said.

The US Secretary of State, om Tuesday as well as on Wednesday in his speech at an event, had asked Pakistan to do more work towards clearing the terror sanctuaries and push harder against "indigenous groups" operating from its soil that are affecting ties with India and Afghanistan's peace and stability.

"Prime minister conveyed satisfaction at the expanded and strengthened strategic partnership between India and the US over the past two years that has opened up new vistas for collaboration. He conveyed that he looked forward to rapid progress and successful completion of the decisions taken with President Obama at the Summit Meeting in June," the PMO said.

Modi also conveyed that he looked forward to meeting President Obama at the G-20 Summit in Hangzhou, China.

Tweeting on his meeting, Modi said, "Glad to meet you, Secretary @JohnKerry. We had fruitful discussions on India-USA ties."

Kerry had earlier tweeted: "Pleased to sit down with @narendramodi, reflect on successful S&CD and our ever- deepening relationship with #India."

Meanwhile, Kerry postponed his departure from India by at least two days, prompting speculation about the reasons for the sudden decision.

Kerry, whose official engagements in India ended with a call on Prime Minister Narendra Modi, was scheduled to leave at 5.30 pm. However, he may now leave either on Friday or Saturday for China where he will join President Barack Obama for the G-20 Summit.

Deputy Spokesperson in State Department Mark Toner, who is travelling with Kerry, said, the visit has been extended to enable him to travel to China for G-20 Summit this weekend.

"Kerry would now remain in the Indian capital until Friday or Saturday, when he will leave for the summit in Hangzhou. Kerry's schedule for his remaining time in India is still to be determined," Toner told the accompanying media.

It was not clear that whether Kerry's decision to travel to China was taken at the last minute or whether he was planning to visit any other country in the region which may have been called off.

Kerry arrived in India on August 29 to co-chair the 2nd India-US Strategic and Commercial Dialogue during which the two sides discussed key issues including terrorism emanating from Pakistan.