US school shooting shocks the world 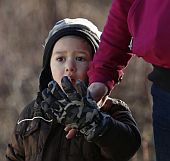 Shocked at the horrific shooting at a US elementary school that left 20 small children and six teachers dead, world leaders on Saturday said it was a "senseless and incomprehensible act of evil", as President Barack Obama sought "meaningful action" to prevent such tragedies in future.

He later died from a self-inflicted gun shot wound, according to law enforcement agents.

Ban extended his condolences to families of the victims and to "all others traumatised by this horrendous crime."

The UN chief wrote to Connecticut Governor Dan Malloy to express his deepest condolences at the "shocking murders".

Bloomberg, who is also the co-chair of Mayors Against Illegal Guns, said after similar incidents of "madness" in Virginia Tech, Aurora and Wisconsin, it is time Obama send a bill on gun laws to Congress to fix the problem.

"With all the carnage from gun violence in our country, it's still almost impossible to believe that a mass shooting in a kindergarten class could happen. It has come to that. Not even kindergarteners learning their A,B,Cs are safe," he said in a statement.

European Union diplomacy chief Catherine Ashton voiced her "shock" at the "tragic shooting, while head of the European Commission Jose Manuel Barroso mentioned his "deep shock and horror" over the incident, which he termed as a "terrible tragedy."

After the incident, Obama said meaningful action should be taken to prevent any future shooting tragedies.

"It is time to take meaningful action to prevent more tragedies like this, regardless of the politics," he said

Britain's Queen Elizabeth II sent a message to Obama, saying she was "deeply shocked and saddened".

"The thoughts and prayers of everyone in the United Kingdom and throughout the Commonwealth are with the families and friends of those killed and with all those who have been affected by today's events."

In his reaction, British Prime Minister David Cameron said he was "shocked and deeply saddened" by the horrific shooting. "It is heartbreaking to think of those who have had their children robbed from them at such a young age, when they had so much life ahead of them."

Canadian Prime Minister Stephen Harper wrote on his Twitter account that "the news is just awful. The thoughts and prayers of Canadians are with the students and families affected by this senseless violence".

French President Francois Hollande, in a message to Obama, said the news had "horrified" him and he wished to express his "deep shock and consternation."

"Like President Obama and his fellow Americans, our hearts too are broken. We share America's shock at this senseless and incomprehensible act of evil."

In April this year, a gunman had killed seven people and wounded three in a shooting rampage at a Christian college in Oakland in the US.

Later in July, a masked gunman killed 12 people and wounded 58 when he opened fire on moviegoers at a showing of the Batman film "The Dark Knight Rises" in Aurora.

The Sikh community was also targeted by a gunman when he attacked a Wisconsin gurdwara during Sunday morning prayers in August killing six persons and critically injuring three more.

Later in August, two people were killed and eight wounded in a shooting outside the iconic Empire State Building here at the height of the tourist season.