US offers $30 million for info on Haqqani leaders 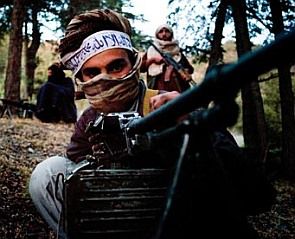 The United States has announced a bounty of $30 million for information leading to the location of five key leaders of the Haqqani militant network, held responsible for several attacks on civilians and NATO forces in Afghanistan.

Pakistan-based Haqqani network, a Taliban-affiliated group, was designated a terrorist network by the US and United Nations in 2012, the State Department said in a statement.

Under it's Rewards for Justice program, the State Department authorized rewards of up to $5 million each for information leading to the location of Aziz Haqqani, Khalil al-Rahman Haqqani, Yahya Haqqani, and Abdul Rauf Zakir.

It also has increased its previous reward offer of up to $5 million for information on the group's leader, Sirajuddin Haqqani, to up to $10 million, the statement said.

Sirajuddin Haqqani is the son of the Haqqani Network founder Jalaluddin. He has admitted planning the January 2008 attack on Kabul's SerenaHotel in which a US citizen and five other people were killed. The government had designated him as a Specially Designated Global Terrorist in 2008, it said.

Aziz Haqqani is Sirajuddin's brother and is involved in logistical operations and command decisions involving cross-border attacks on ISAF and Afghan forces.

Khalil al-Rahman Haqqani, Sirajuddin's uncle, is a senior member of the terrorist group and has raised funds for the Taliban. He has been linked to Al Qaeda terrorist operations.

He also has overseen the detention of hostages captured by Haqqani and Taliban fighters. The US government designated him as a Specially Designated Global Terrorist in 2011.

Yahya Haqqani, Sirajuddin's brother-in-law, has been closely involved in the group's operational, financial, and propaganda activities, and has served as de-facto leader when other senior-most HQN leaders were absent.

He has delivered funds to HQN commanders and Al Qaida members, and has also served as Haqqani's primary liaison with foreign terrorists fighting in the region. He was designated a Specially Designated Global Terrorist this year, it said.

"Based in Pakistan, Haqqani network conducts cross-border attacks in Afghanistan and is considered the most lethal insurgent group targeting International Security Assistance Force (ISAF) and Afghan personnel," the statement said.

It is responsible for many high-profile attacks in Afghanistan, including the 19-hour attack on the US Embassy in Kabul and the nearby ISAF headquarters in September 2011.