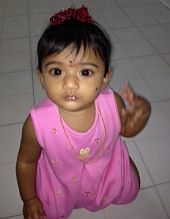 The police in Philadelphia, US, continued with its search to find the kidnapped 10-month-old Indian girl, as it joined hands with the Telugu community to announce an award of $30,000 to information leading to the safe return of the infant.

Saani Venna was abducted by unknown kidnappers in a Philadelphia township on Monday morning, during which her grandmother Satyavathi Venna, 61, was killed by the assailants.

A large number of people including those from the Indian American community attended a candle-light vigil in memory of the Satyavathi. The vigil was organised by the Telugu Association of North America.

Meanwhile, the police and the FBI continued with their intensive search operation to find Saani.

"This is not a typical homicide investigation," District Attorney Risa Vetri Ferman told the Philly Inquirer.

"We also have the search and rescue operation," she added.

She said investigators were being guarded with information because, "We do not want to do anything that would jeopardise the child's safety."

Pennsylvania State Police has issued an Amber Child Abduction Alert for Saanvi Venna who is believed to have been taken from her family's apartment after her grandmother's murder.

According to Ferman, the body of Satyavathi, the paternal grandmother of Saanvi, was discovered inside the apartment. She was babysitting the child. The grandmother was visiting from India, arriving in July 2012 and was scheduled to return home January 2013.

The parents of the child, Venkata Konda Siva Venna (father) and Chenchu Latha Punuru (mother) had emigrated from India in February 2007 and have previously lived in San Antonio Texas, Troy Michigan, and Cleveland Ohio. In June this year, they moved to King of Prussia in Pennsylvania.