US House panel moves to restrict aid to Pak

Source: PTI
July 21, 2011 14:18 IST
Putting Pakistan on notice, a Republican-majority Congressional panel has cleared a key bill that would slap strict restrictions on the United States aid to Islamabad for not doing enough in the war against terrorism.

The powerful US House of Representatives Committee on Foreign Affairs on Wednesday passed the Defence Authorisation Bill, which prohibits further security aid to Pakistan until the secretary of state provides certification affirming various aspects of Pakistani cooperation in the war on terror. It also prohibits further civilian assistance until the effectiveness of such programmes is certified by the secretary of state, in addition to a certification on Pakistan's cooperation in the war on terror.

"The language in this bill puts the Pakistan government on notice that it is no longer business as usual and that they will be held to account if they continue to refuse to cooperate with our efforts to eliminate the nuclear black market, destroy the remaining elements of Osama bin Laden's network and vigorously pursue our counter-terrorism objectives," Congresswoman Ileana Ros-Lehtinen said.

"I think the prospect of a cutoff of assistance will get their attention and that the games being played with our security will finally stop," said Ros-Lehtinen, who chairs the panel, which on Wednesday passed the bill blocking US assistance to Pakistan, Egypt, Lebanon, Yemen and Palestinian authority. Several other lawmakers supported the move.

Ranking Democratic member Howard Berman agreed that the US should get tough with Pakistan but argued that the Republican bill's approach was shortsighted. "The key to long-term stability in Pakistan, and the only way we'll ever get Pakistan to change its behaviour, is by strengthening its civilian institutions, not weakening them as this bill will do," Berman said. "Our effort in Afghanistan ... supplying to our troops there depend highly on cooperation from Pakistan" and not by declaring it an enemy, he said, adding that there is a need "to ensure that we have a productive relationship with Pakistan."

He also told his Congressional colleagues that India had never suggested that the US cut off all economic assistance to Pakistan. Congressman Dana Rohrabacher from California said, "I do not know, how much more Pakistan has to do to prove that they are not our friend."

"Pakistan is China's best friend. We just can't live in an illusion that Pakistan is so important. Most people understand that the ISI is lying to us. We can make a more peaceful world by making sure that India is our friend," he said. Rohrabacher alleged that China has worked through Pakistan to provide nuclear material and knowhow to the world.

Source: PTI© Copyright 2021 PTI. All rights reserved. Republication or redistribution of PTI content, including by framing or similar means, is expressly prohibited without the prior written consent.
Related News: Pakistan, Howard Berman, Ileana Ros-Lehtinen, Dana Rohrabacher, US House of Representatives Committee on Foreign Affairs
SHARE THIS STORY
Print this article Why US suspended, didn't terminate aid to Pakistan
'US aid to Pak may boost its safe terror havens' 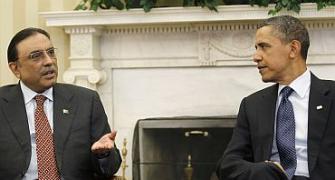 We can operate without US aid: Pak Army