US' longest war in Afghanistan ends with Taliban's return to power

America has ended its longest war in Afghanistan, President Joe Biden has announced, hours after the final United States evacuation plane flew out of Kabul airport amidst celebratory gunfire from the Taliban, leaving the war-ravaged country in disarray and its future uncertain under the rule of hardline Islamist militants. 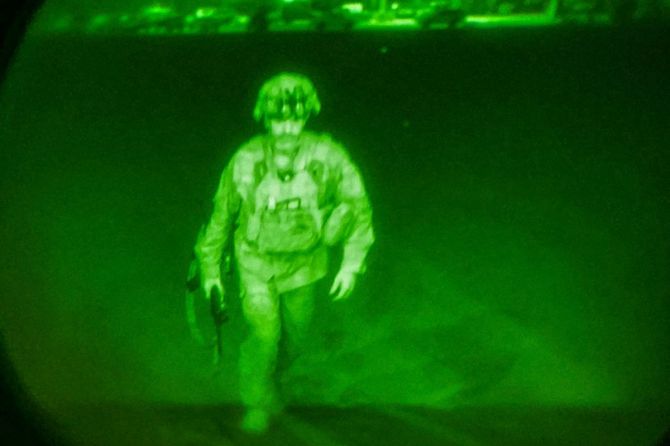 IMAGE: US Army Major General Chris Donahue, commander of the 82nd Airborne Division, steps on board a C-17 transport plane as the last US service member to leave Hamid Karzai International Airport in Kabul, on August 30, 2021. Photograph: XVIII Airborne Corps/Handout via Reuters

The last plane carrying US forces left Afghanistan on Monday around midnight, a day ahead of schedule, ending a 20-year war that left nearly 2,500 American troops dead and spanned four presidencies.

The C17 aircraft's departure from Kabul's international airport was the final chapter in a contentious military effort, which eventually saw the US handing Afghanistan back to the very Islamist militants it sought to root out when American troops entered the country in 2001.

Celebratory gunfire and fireworks erupted across Kabul as Taliban fighters took control of the airport following the withdrawal, proclaiming “full independence” for Afghanistan.

“Now, our 20-year military presence in Afghanistan has ended,” Biden said on Monday, thanking the armed forces for their execution of the dangerous retrograde from Afghanistan with no further loss of American lives.

“For now, I will report that it was the unanimous recommendation of the Joint Chiefs and of all of our commanders on the ground to end our airlift mission as planned.

“Their view was that ending our military mission was the best way to protect the lives of our troops, and secure the prospects of civilian departures for those who want to leave Afghanistan in the weeks and months ahead,” Biden said, defending his decision to stick with the August 31 deadline despite mounting criticism from political opponents, and even from some allies.

The head of US Central Command General Kenneth “Frank” McKenzie announced the end of the mission to Afghanistan during a news conference on Monday at the Pentagon, informing reporters the last US aircraft took off in Kabul just before midnight local time, ahead of President Biden's deadline for completing the withdrawal.

“It's a mission that brought Osama bin Laden to justice, along with many of his al-Qaida co-conspirators,” McKenzie said, noting the cost to the US was high.

“Two thousand four hundred sixty-one US service members and civilians killed, and more than 20,000 who were injured,” he said.

“We did not get everybody out that we wanted to get out,” he said about the 18-day effort described as the largest airlift in US military history.

In the end, McKenzie said, the US evacuated over 79,000 civilians through the Kabul airport, which includes 6,000 Americans and about 73,000 Afghans and third-country nationals.

Following the US pullout, Taliban fighters were seen exploring Kabul airport and taking over its facilities, including a hangar with aircraft apparently left behind by the American military.

Biden, who will address the nation later on Tuesday, said he has asked the Secretary of State to lead the continued coordination with US international partners to ensure safe passage for any American, Afghan partners and foreign nationals who want to leave Afghanistan.

This will include work to build on the UN Security Council Resolution that sent the clear message of what the international community expects the Taliban to deliver on moving forward, notably freedom of travel, he said.

“The Taliban has made commitments on safe passage and the world will hold them to their commitments. It will include ongoing diplomacy in Afghanistan and coordination with partners in the region to reopen the airport allowing for continued departure for those who want to leave and delivery of humanitarian assistance to the people of Afghanistan,” Biden said.

Meanwhile, Secretary of State Antony Blinken said the Taliban will have to earn international legitimacy and support by meeting their commitments on freedom of travel, counterterrorism, respecting the basic rights of the Afghan people, including women and minorities, and forming an inclusive government.

Blinkin said the US will engage with the Taliban not on the basis of what a Taliban-led government says, but what it does to live up to its commitments.

“The Taliban seek international legitimacy and support. Our message is: any legitimacy and any support will have to be earned,” Blinken said in an address to the nation hours after the US concluded its mission to Afghanistan.

“The Taliban can do that by meeting commitments and obligations – on freedom of travel; respecting the basic rights of the Afghan people, including women and minorities; upholding its commitments on counterterrorism; not carrying out reprisal violence against those who choose to stay in Afghanistan; and forming an inclusive government that can meet the needs and reflects the aspirations of the Afghan people,” he said.

Defence Secretary Lloyd Austin in his remarks on the troop withdrawal said no other military in the world could accomplish what the US, its allies and partners did in such a short span of time in Afghanistan.

“No other military in the world could accomplish what we and our allies and partners did in such a short span of time. That is a testament not only to our forces' capabilities and courage but also to our relationships and the capabilities of our allies and partners,” Austin said in a statement at the conclusion of the American mission in Afghanistan.

“Over the course of more than four decades in service, I have never ceased to be amazed at what an American service member can do. I remain in awe. And I am thankful for the skill and professionalism with which they do it,” he said. Post evacuation mission, Austin said the US will help Afghan friends as they now turn to the task of beginning new lives in new places.

“We will provide these men, women, and children with temporary living spaces, medical care, and sustenance at military facilities at home and abroad.

"We will continue to support the interagency effort led by the Department of Homeland Security to screen them and to process some of them to lead new lives in America. And we will work hard to defend our citizens from terrorist threats emanating from anywhere around the globe,” he said.

The final days of the US presence in Afghanistan were filled with chaos, bloodshed, desperation, fear and panic as troops attempted to stave off attacks by the Islamic State Khorasan (ISIS-K), while trying to coordinate a massive exodus of people out of the country.

The US no longer has a diplomatic presence in Kabul, and the chief US diplomat in Afghanistan, Ross Wilson, was on the last American flight out of Afghanistan.