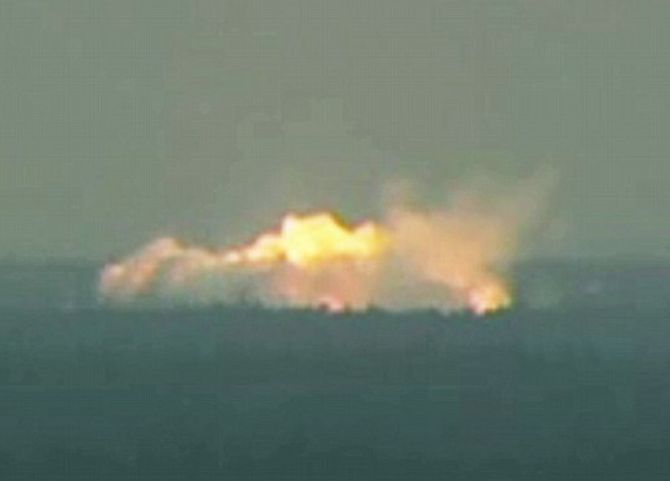 The US military on Thursday dropped its largest non-nuclear bomb ever deployed in combat on an Islamic State tunnel complex in eastern Afghanistan, close to the Pakistani border.

A GBU-43/B Massive Ordnance Air Blast Bomb, nicknamed ‘Mother Of All Bombs,’ was dropped on an IS--Khorasan tunnel complex in Achin district of Afghanistan’s Nanagarh province, the Pentagon said.

Pentagon spokesman Adam Stump said it was the first-ever combat use of the bomb.

A MOAB is a 21,600-pound, GPS-guided munition that is America’s most powerful non-nuclear bomb.

The bomb was dropped by an MC-130 aircraft, operated by the Air Force Special Operations Command, according to the military sources.

This is part of the ongoing efforts to defeat Islamic State in Afghanistan, the US Central Command said.

The strike was designed to minimise the risk to Afghan and US Forces conducting clearing operations in the area while maximising the destruction of IS fighters and facilities.

“As their losses have mounted, they are using IEDs, bunkers and tunnels to thicken their defence,” said General John W Nicholson, Commander, US Forces - Afghanistan.

“This is the right munition to reduce these obstacles and maintain the momentum of our offensive against IS,” Nicholson said.

The United States Central Command said US Forces took every precaution to avoid civilian casualties in the strike.

American forces will continue offensive operations until IS is destroyed in Afghanistan, it said.

Photograph: US Department of Defence/Reuters