A frustrated and angry America Inc believes it has been let down by Delhi after all of its lobbying to push through the deal in the US Congress, reports Aziz Haniffa in Washington, DC. 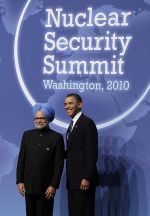 United States officials, both in the administration and the Congress, don’t hold out much hope that the US-India civilian nuclear deal, signed five years back, will be considered for consummation or implementation before the general election next year.

The Indian Parliament has refused to compromise on its nuclear liability law it enacted.

There is a high degree of frustration among US businesses after all of its lobbying to push through the deal assuming that America Inc would garner a major slice of the Indian energy market pie.

Ron Somers, president of the US-India Business Council told rediff.com, “That was a defining galvanising issue for everyone -- in 2005 the announcement of US-India civilian nuclear cooperation, then the three years that followed of the activity, the advocacy in getting that cleared, both by the US Congress, by the Indian Parliament, by the IAEA (International Atomic Energy Agency), by the NSG (Nuclear Suppliers Group).”

He said, “That was a major undertaking by not only both of our countries, but all of the other 44 other nations of the NSA -- it was a major, heavy lift.”

Today, some administration officials and US industry officials privately express their contention that it may very well be in the dustheap of history.

“When you consider that growth and job creation is the common imperative that both of our countries share, it is so crucial that we once again refocus on energy security,” Somers said.

“And, energy security means that we must have reliable electricity supply, which is an essential ingredient for growth and job creation,” he said, and added, “And, central to that has to be the development of a safe and modern day civil nuclear capability.”

Somers said, “The United States companies that are involved in nuclear power would very much look forward to participating and we want to consummate this on the ground by seeing real progress emerge.”

But Somers, said, “In the end, let’s be patient,” pointing out that “in a sense, it took how many years for the United States and India to even have the discussion about civil nuclear cooperation.”

He recalled how it was announced in 2005 and “in 2008, it was passed by the (Indian Parliament), and here we are five years later,” with the deal yet to be implemented.

However, Somers noted, “We have sites identified in Gujarat and UP (Uttar Pradesh) for both Westinghouse and for GE and now we need to focus on getting whatever needs to get completed regarding the liability question, such that we can begin actually getting these projects up and running on the ground.”

He predicted that if “we have these flagship projects moving forward, it’s going to be a magnet pulling other companies, other nuclear programs, involving themselves in India’s civil nuclear programs such that India develops the kind of energy security and energy portfolio mix that it requires in order to be continuing to propel its growth forward.”

“To be able to create the jobs that are required,” he said, and reiterated, “So, it is very important that we consummate this initiative.”

India’s Ambassador to the US, Nirupama Rao, said March 15 at the Center for Strategic and International Studies that this deal “has been a symbol and the platform of a transformed India-US relationship.”

Also going down memory lane, she said, “It grew out of our conviction that nuclear energy could help us meet our energy requirements in an environmentally sustainable manner.”

Rao asserted, “We are committed to providing a level-playing field to all our international partners including US firms for development of nuclear energy. Our two governments and the private entities in this sector have been engaged in purposeful, result-oriented discussions and we hope to positively move forward in this vital area of cooperation.”

At the first hearing of the House Foreign Affairs Subcommittee on Asia and the Pacific in the new 113th Congress, this panel, which has jurisdiction over matters pertaining to South Asian Affairs, questioned Obama administration officials on the status of the US-India nuclear deal. Lawmakers spoke of their constituent companies expressing frustration over the lack of progress in the implementation of the deal.

The administration’s point man for South Asia, Assistant Secretary of State Robert Blake, acknowledged that the impasse over the implementation of the US-India civilian nuclear deal poses many challenges to Washington and New Delhi.

Blake told lawmakers that the nuclear deal was “one of the really transformative deals that was done in the course of Bush administration,” and that the “Obama administration came in determined to try to continue that momentum.”

While noting that “there's been some progress,” he said, “there's also still many challenges ahead.”

Blake conceded that the nuclear liability law was an anathema to US business and industry that had lobbied so vigorously for the passes of the deal in the US Congress.

“One challenge is that India passed a nuclear liability law that our companies do not agree with and do not think provides them sufficient protection from possible liability suits,” he said.

“We have focused most of our efforts on trying to negotiate with the Indians and support our company's efforts to negotiate what are called early works agreements that are things like site preparation and early contracts and things like that that could again pave the way for future civil nuclear contracts,” Blake said.

He pointed out that “the Indians have set aside several areas in Gujarat and in Uttar Pradesh for American companies to eventually build such plants and we continue to work through our liability concerns with the Indian government.”

“So we hope very much this year that one of these early works agreements can be signed by Westinghouse and the Nuclear Power Corporation of India Limited, which is -- its counterpart,” he said, but reiterated, “There has been progress but again, much work needs to be done.”

Earlier, the chairman of the subcommittee, Steven Chabot, Ohio Republican, said, “The 2008 Indo-US Civilian Nuclear Agreement was considered a watershed moment for US-India relations,” but that “the nuclear liability issues has created an obstacle to US firms.”

He also bemoaned that “four years later, many believe that it has failed to tie India closer to the US-led global nonproliferation and arms control architecture. India has made no efforts to sign the Comprehensive Test Ban Treaty or to voluntarily halt its production of fissile materials.”