A demonstrator yells as he blocks a street intersection during a protest over the shooting death of Michael Brown in Clayton, Missouri. Photographs: Jim Young/Reuters

Emergency has been declared in the American State of Missouri ahead of grand jury's decision in the fatal shooting of an unarmed black teenager who was killed by a white police officer.

The killing of Michael Brown, 18, in August had resulted in large scale violence in certain parts of the State. Demonstrators lay on the ground with chalk outlines to represent a mock crime scene during a protest marking the 100th day since the shooting death of Michael Brown in St. Louis, Missouri. Photographs: Jim Young/Reuters

The decision by the Missouri Governor Jay Nixon to declare emergency is seen as a preventive measure to prevent any violence in this sensitive state now.

In the days after the fatal shooting of Brown by police officer Darren Wilson, resulted in a large scale violence, looting and street protests in the streets of St Louis and its suburbs.

On Monday, Nixon signed an executive order activating the Missouri National Guard to support law enforcement during any period of unrest that might occur following the grand jury's decision concerning the investigation into the death of Brown. The Governor said the Guard will provide support for law enforcement's objectives of maintaining safety and protecting constitutional rights.

"As part of our ongoing efforts to plan and be prepared for any contingency, it is necessary to have these resources in place in advance of any announcement of the grand jury's decision," Nixon said.

"These additional resources will support law enforcement's efforts to maintain peace and protect those exercising their right to free speech," he said.

The National Guard is well-suited to provide security at command posts, fire stations and other locations as well as perform other functions that will free up law enforcement officers to remain focused on community policing and protecting constitutional rights," Nixon said. 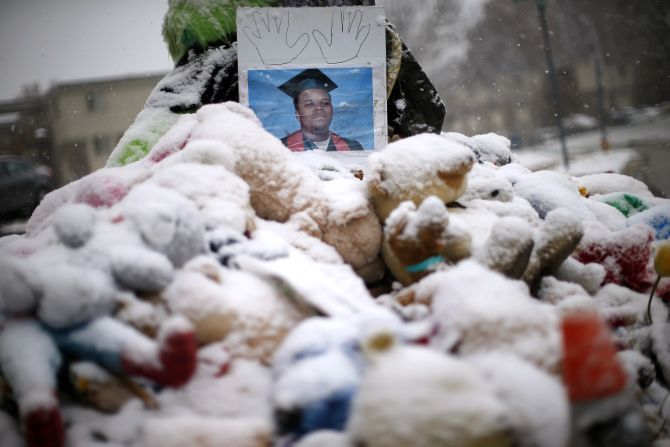 Snow falls on a memorial on the 100th day since the shooting death of Michael Brown in Ferguson, Missouri. Photographs: Jim Young/Reuters

"All people in the St Louis region deserve to feel safe in their communities and to make their voices heard without fear of violence or intimidation. Public safety demands that we are fully prepared for any contingency, regardless of what the St Louis County grand jury or the US Department of Justice decides," he said.

The St Louis County prosecutor has said publicly that an announcement of the grand jury's decision will be made later this month.

The United States Department of Justice, which is conducting both civil and criminal investigations of the death of Brown, has not announced when its investigations will be concluded. 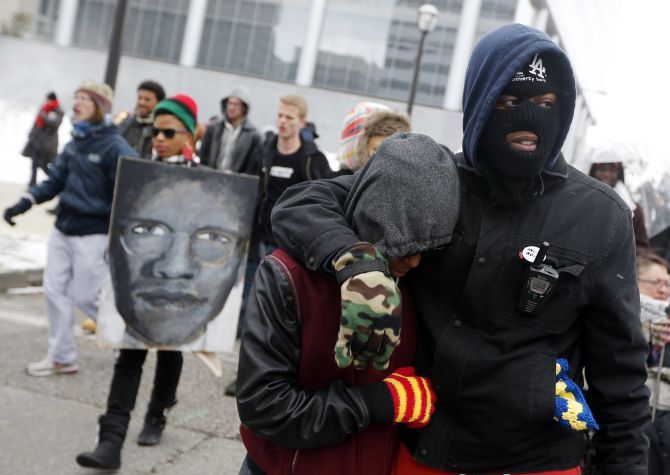 "Our department, like other police departments in the region, has a full time job keeping our neighbourhoods safe. We are used to working with other agencies in times of necessity," said St Louis Metropolitan Police Chief Sam Dotson.

"Having the support of the National Guard available will enable local officers to continue to respond promptly to calls for service," said St Louis County Police Chief Jon Belmar.