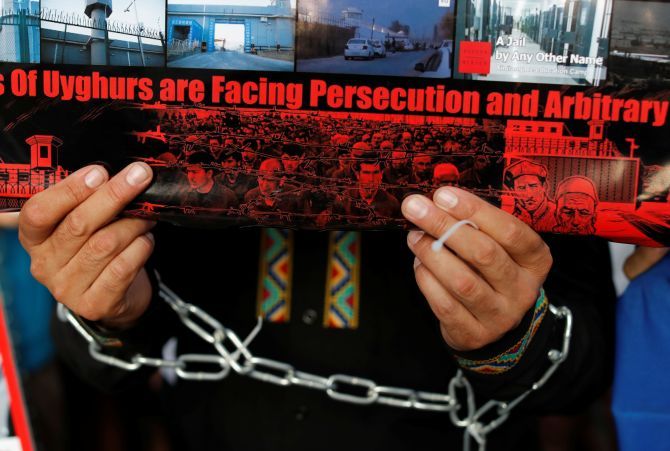 The US House of Representatives on Tuesday passed the Uyghur Human Rights Policy Act, which among other things, proposes that America redirects resources to address the mass internment of over 1,000,000 Uyghurs and other Muslim ethnic minorities in China.

The Act, which calls for an end to the detaining, torture and harassment of the Uyghur communities in China, was passed by the Senate earlier.

By passing this bill, Congress is showing that the US will not turn a blind eye to the suffering of the oppressed, House Republican Leader Kevin McCarthy said.

"As with the Hong Kong Democracy and Human Rights Act, we are sending a simple but powerful message to the Communist Party: power cannot be maintained at the expense of the rights of the people without substantial consequences," he said.

Senators Marco Rubio and Bob Menendez, Ranking Member of the Senate Foreign Relations Committee, said that the bill is an important step in countering the totalitarian Chinese government's widespread and horrific human rights abuses in Xinjiang.

Among these include the mass internment of more than one million Uyghurs and other predominantly ethnic Turkic Muslims, as well as Beijing's intimidation and threats against US citizens and legal permanent residents on American soil.

In Beijing, the Foreign Affairs Committee of the National People's Congress, China's top legislature, on Wednesday issued a statement, expressing strong indignation over and firm opposition to the passing of the bill by the US Congress, state-run Xinhua news agency reported.

'Facts have proved that the measures taken by the Chinese side are effective, and security situation has improved markedly in Xinjiang where there have been no violent, terrorist incidents in the past three years,' it said, justifying the 'vocational education and training centres' in Xinjiang.

"For all wrong actions and words... the proper price must be paid," the spokeswoman warned.

Asked if the US move would have an impact on trade talks, Hua did not directly answer the question. But she said there was 'no way this can have no effect on China-US relations as well as the two countries' cooperation in important areas'.

The Uighur Act directs various US government bodies to prepare reports on China's treatment of the Uyghurs, a predominantly Muslim Turkic ethnic group.

As per the Act, the Office of the Director of National Intelligence shall report to Congress on issues including the security threats caused by the Chinese government's reported crackdown on the Uyghur population in Xinjiang, the frequency with which other governments are forcibly returning Turkic Muslim refugees and asylum seekers to China, and the development or transfer of technology that facilitates mass internment and surveillance.

The Department of State shall report on the scope of the reported crackdown in Xinjiang, including the number of detained individuals, the use of forced labour in the region, an assessment of government surveillance in the province, and US diplomatic efforts to address the crackdown.

It will also report on whether certain individuals, including the Chinese Communist Party secretary for Xinjiang, meet the criteria for sanctions under the Global Magnitsky Human Rights Accountability Act.

The Federal Bureau of Investigation will report on topics such as its efforts to protect ethnic Uyghurs and Chinese nationals in the US from Chinese government intimidation.

The US Agency for Global Media shall report on media-related matters, including the reach of US media into Xinjiang, assessments of Chinese propaganda strategies, and US actions to counter such efforts to downplay the crackdown.

"The Chinese Government and Communist Party is working to systematically wipe out the ethnic and cultural identities of Uyghurs and other Muslim minorities in Xinjiang," Rubio said.

The passage of Uyghur Act is a recognition that the US cannot afford to stand idly by as millions of Uyghur Muslims continue to be unjustly imprisoned, subjected to a mass surveillance state, and forced into labour camps by an autocratic regime, Menendez said.

"With this legislation, Congress is taking the necessary and long-overdue steps to hold accountable officials in the Chinese government and Communist Party responsible for gross violations of human rights and possible crimes against humanity," he said.

"Uyghurs deserve justice for the barbaric and abhorrent acts they have been forced to endure," Menendez said.

McCarthy said China's oppression of millions of Uyghurs is a gross violation of human rights.