US: 4-year-old accidently guns down father 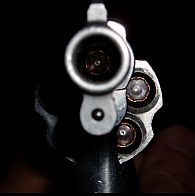 A four-year-old boy in the United States accidentally shot and killed his father in yet another shooting incident in the country involving a toddler.

Justin Stanfield Thomas, 35, and his son made an unannounced trip on Friday to the home of an unidentified former roommate in Prescott, Arizona, police said.

Thomas had previously lived in the residence, according to investigators.

Moments after arriving at the home, the boy picked up the small-caliber handgun and asked his father and other adults in the room what it was he was holding, police Sgt. Brandon Bonney said.

Seconds later he pulled the trigger.

Officers and emergency crews arrived and found Thomas, of Phoenix, with a single gunshot wound to the chest. He was transported to a local hospital, where he was pronounced dead.

"This appears to be an accident. There was no conflict in the stories of those in the house," Bonney said.

"The resident didn't know his former roommate was stopping by to visit," he said.

Acknowledging it appears to have been a tragic accident, Bonney cautioned gun owners to be careful with their firearms.

"We want to remind people without making a villain of this person, that if a child is visiting your home, the first thing to do would be put the firearm away," he said.

No charges were anticipated because the incident was an accident, Bonney told CNN.

In April, in a shocking incident, a 5-year-old toddler in the US accidentally shot and killed his 2-year-old sister with a rifle that was given to him as a gift.

Also in April a similar incident had come to light when a six-year-old boy died in New Jersey after being accidentally shot in the head by his four-year-old neighbour while they were playing.