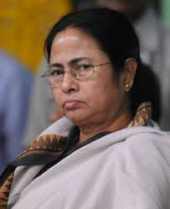 An upset West Bengal Chief Minister Mamata Banerjee on Wednesday cancelled her scheduled meeting with Finance Minister P Chidambaram and left for Kolkata, a day after she was gheraoed and her minister Amit Mitra manhandled by Left protesters in New Delhi.

Hours after facing the ire of the Left activists at the Planning Commission, Banerjee had also cancelled her appointment on Tuesday evening with Prime Minister Manmohan Singh, who expressed regret over the incident.

As Mitra was hospitalised at the AIIMS on Tuesday evening and kept under observation, Dr Singh spoke to Banerjee after her office called up the Prime Minister’s Office to cancel the meeting scheduled with him saying she was unwell and her blood pressure had dipped.

The PM also enquired about her well-being, sources close to the chief minister said. They said the meeting with Chidambaram and a press conference she was to address on Tuesday evening have been cancelled.

Banerjee and Mitra were the target of the wrath of Communist Party of India-Marxist and its students' wing activists – Student’s Federation of India -- who were protesting the death of their comrade Sudipta Gupta in police custody in Kolkata last week.

Some Trinamool Congress workers, led by party leader Mukul Roy, also staged a protest gathering at Jantar Mantar in New Delhi. Giving a new twist to the incident, Trinamool MP Sukhendu Shekar Roy claimed it was a "murderous attack" on Banerjee. "It was a murderous attempt on the life of Mamata and three other cabinet ministers, especially Amit Mitra," Roy told reporters in New Delhi, adding that it was "a pre-planned attack on the eve of the panchayat elections to create a situation so that the demand for central forces can be justified."

At the same time, he sidestepped questions on the attack by Trinamool Congress activists on CPI-M offices and workers across West Bengal. "That is a wild allegation against us. Nowhere in this country during the 34- year misrule of Left Front more than 60,000 innocent people were butchered. Don't compare this incident with that genocide," he said to questions on the attacks by Trinamool Congress activists in Bengal.

Condemning the attack, Roy claimed that the police had remained silent onlookers when CPI-M and SFI activists "roughed up Mitra and no arrests has been made yet." He claimed that the protests at the Planning Commission on Wednesday was not a demonstration by students as "there were many hired goons above the age of 40."

In the incident, while the CM was shielded by policemen, it was left to Mitra's lot to face the anger of the activists who were protesting the death of SFI member Sudipta Gupta.

The 65-year-old Bengal finance minister was pushed and jostled around as he tried to enter the Yojna Bhawan building.