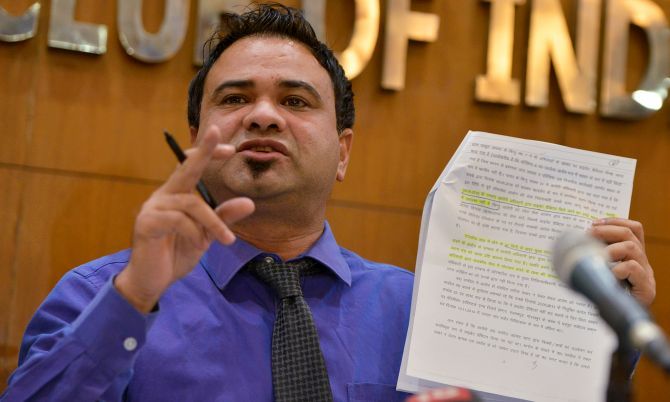 Khan was arrested on Wednesday night with assistance from Mumbai Police at the airport when he arrived in the city to attend anti-CAA protests, an official said.

"Officials of the UP STF arrested Dr Kafeel Khan in a case which was registered at Civil Lines Police Station under section 153 A (promoting enmity between different groups) of IPC. Our police team helped our UP counterparts on their request," said an official from Mumbai Police.

He claimed that Khan had made inflammatory statements on December 12 last year during the protest near Bab e Syed Gate outside the Aligarh Muslim University in front of more than 600 students.

The official also alleged that the Gorakhpur doctor had made objectionable comments against Union Home Minister Amit Shah.

The FIR against Khan mentions that Swaraj India's president Yogendra Yadav was also present during the speech at AMU.

Following the arrest in the case, Khan was taken to the Sahar Police Station and after completing formalities he will be taken to UP on transit remand, the official said.

Khan, a paediatrician, had come to the limelight in 2017 when a controversy broke out after the death of over 60 children in less than a week at the BRD Medical College in Gorakhpur, UP.