Police say there is no evidence to suggest the shooting is terror-related. 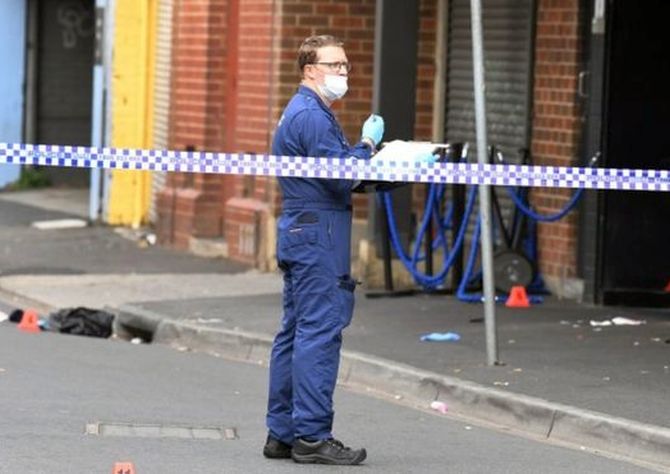 IMAGE: Investigators at the shooting spot in Melbourne. Photograph: Reuters

One person was killed and three others were injured after a gunman fired at a group of people outside a night club in Melbourne, Australia on Sunday.

The deceased has been identified as Aaron Khalid Osmani, a security guard at the e Love Machine night club in Prahran, Melbourne.

The injured were admitted to a hospital and are undergoing treatment.

"People were all lining up to get inside the club and suddenly they started screaming and yelling, 'Oh my god, oh my god'. When the car left, it ran into the people on the ground. It was horrific, it was so horrible. I couldn't sleep," she told Sunday Morning Herald.

According to the police, the car which was used in the shooting was later found burnt.

Police say there is no evidence to suggest the shooting is terror-related.

No arrests have yet been made, and police have appealed for witnesses to come forward.