A man accused of stealing Rs 25 lakh from the Jagdishpura police station in Agra died in police custody after his health deteriorated during interrogation, officials said on Wednesday. 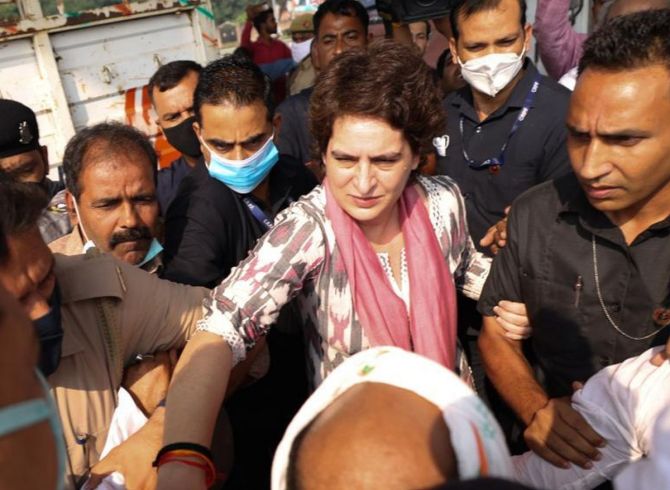 Senior Superintendent of Police (Agra) Muniraj G said the accused, Arun, suddenly fell sick on Tuesday night while a raid was being carried out at his house to recover the stolen money.

He was taken to a hospital where doctors declared him dead, he said.

Congress national general secretary Priyanka Gandhi Vadra, who raised questions about his death in a tweet, left by road from the state capital Lucknow to Agra to meet the Arun's family but was stopped from proceeding by the Lucknow Police at the Lucknow-Agra Expressway, citing the Agra DM's request to not allow any political person to reach there.

"Do I need somebody's permission whenever I move out of Lucknow? Is there a problem why I am not being allowed to go to Agra, is there a law and order issue," she asked policemen who stopped her cavalcade.

"Someone has died, how can it be a law and order issue? Ask the DM by calling him. Its too much that I cannot go out anywhere and should remain confined in a guest house in Lucknow," she told policemen when they showed her the message from the Agra district magistrate.

Arun was accused of stealing the money on Saturday night from the 'maalkhaana' (a storage house where items confiscated by police are kept) of the police station where he worked as a cleaner.

Following the theft, six police personnel, including the station house officer, had been suspended by the additional director general (ADG) of Agra zone.

During the investigation, police rounded up several suspects. Arun was one of them as he had access to the 'maalkhaana'.

He was arrested from the Taj Ganj locality in Agra on Tuesday.

According to the police, Arun had shaved his head to hide his identity.

"Police teams were questioning several suspects in connection of the theft. On Tuesday, evening a man named Arun, who is a resident of the Lohamandi area, was taken into police custody," the Agra SSP said.

"During interrogation, Arun admitted that he had committed the theft and informed us that the stolen money was at his home," he added.

Police recovered Rs 15 lakh during the raid on his house before his health deteriorated and he died.

The SSP said his body was sent for a post-mortem examination and suitable action will be taken after the report comes. A complaint has also been filed by Arun's family in connection with his death, he said.

People from the Valmiki community gathered at Arun's house and demanded a fair probe into his death.

Local leaders of the community said they would not observe 'Maharishi Valmiki Jayanti' on Wednesday until a fair investigation is launched in the matter.

In a tweet, the Congress general secretary asked if beating anyone to death in police custody was any kind of justice.

'The incident of Arun Valmiki's death in Agra police custody is condemnable. On the day of Valmiki Jayanti, the UP government has acted against his messages. A high-level investigation should be held and action taken against the policemen, and the victim's family should get compensation,' she said in the tweet in Hindi.

Bahujan Samaj Party president Mayawati in a tweet said, 'The death of a sanitation worker in police custody in Agra is very sad and shameful. The UP government should give strict punishment to the culprits and should also provide help to the victim's family in every way. This is the BSP's demand.'