The law student who has accused Bharatiya Janata Party leader Swami Chinmayanand of rape was arrested on Wednesday on charges of extortion and sent to 14-day judicial custody, police said. 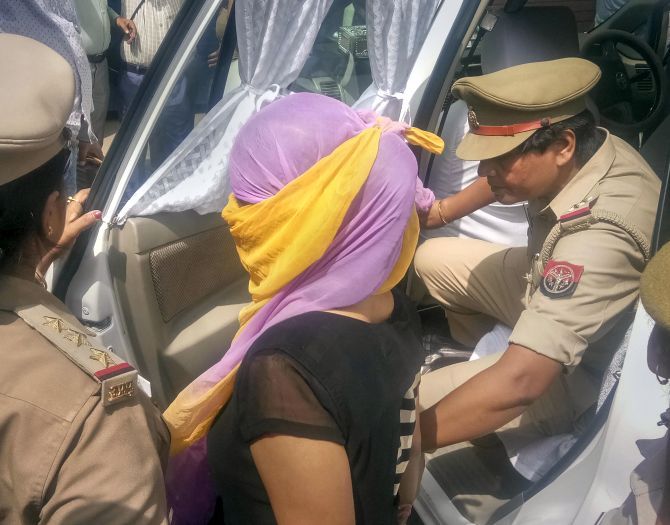 IMAGE: The woman law student (face covered), who alleged BJP leader Chinmayanand of sexual misconduct and harassment, arrested by the SIT in an extortion case in Shahjahanpur on Wednesday. Photograph: PTI Photo

The23-year-old woman was arrested around 9.15 am from her home by a special investigation team (SIT) amid large police deployment.

Inspector General Naveen Arora, who heads the SIT of the Uttar Pradesh police, said they arrested her after ‘enough’ digital and forensic evidence was found and statements recorded.

"We have sufficient evidence that Rs 5-crore extortion money was demanded from Chinmayanand,” he told reporters.

He said three men arrested earlier for extortion said they send messages to Chinmayanand ‘in panic’ on the directions of the woman when the money demanded was not delivered.

Another SIT member said they arrested the student after confronting her with the video clips one of them on an alleged conversation in a car between the three men and the student discussing the extortion plan.

The officer claimed that during the questioning in the morning, the student ‘verified’ the contents of the clip, confirming that it had her voice and that of the three other men.

Last week, the SIT formed by the Uttar Pradesh police on the instruction of the Supreme Court, had arrested Chinayamand on the basis of the woman's complaint.

Simultaneously, they also arrested the three men and booked the student on the extortion charge.

Soon after the woman's arrest, her counsel Anoop Trivedi said he has filed a bail application that was to be heard in court later in the day.

The plea was, however, rejected in the afternoon.

A local court had a day earlier admitted an anticipatory bail plea filed by the student and fixed it for hearing on Thursday. 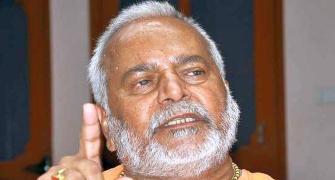 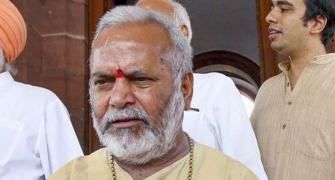 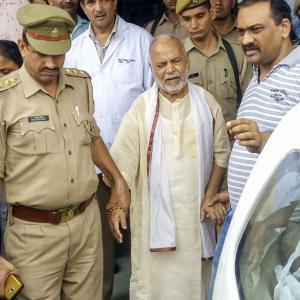 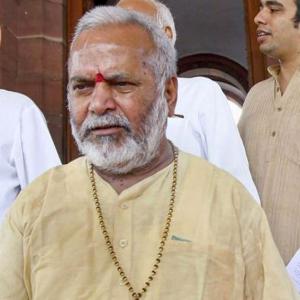 Chinmayanand raped me for a year: UP student