The Uttar Pradesh government is thinking seriously in the direction of the implementation of the Uniform Civil Code in the state, deputy Chief Minister Keshav Prasad Maurya said on Saturday. 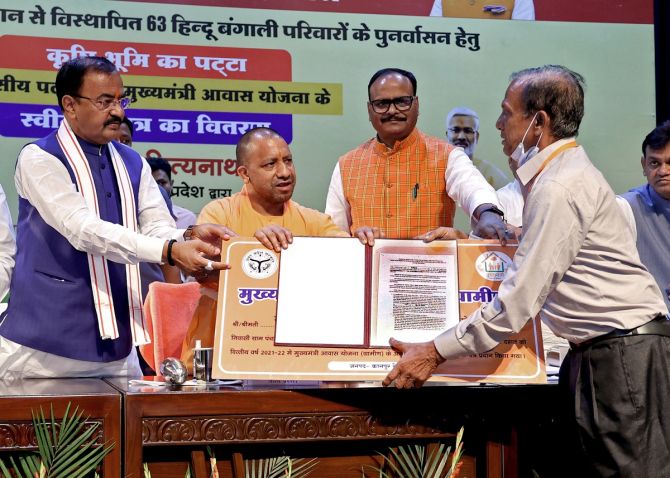 Maurya made the revelation while favouring the expeditious implementation of the UCC both in the country and the state.

Terming the constitutionally-envisaged measure an "important step" for the realisation of the governance 'mantra' of Sabka Saath, Sabka Vikas (inclusive growth), he said it should be welcomed by everybody.

"One law for all in one country is the need of the hour. It is required that we should get out of the system of one law for one person and another for others. We are in favour of a common civil code," Maurya said while talking to newspersons in Lucknow.

"The Uttar Pradesh government is thinking in this direction seriously,” the deputy CM said.

Just as the Uttarakhand government has initiated steps, in UP and other states too where there is the Bharatiya Janata Party government, the 'common civil code' should be implemented, he said.

Even in other states where there is no BJP government, its implementation is necessary for inclusive growth, he said, adding the “common civil code is such a thing which should not only be demanded but also welcomed by all”.

Soon after the formation of the Uttarakhand government after the recent assembly elections, the first Cabinet meeting presided by Chief Minister Pushkar Singh Dhami there decided to form a committee of experts on the implementation of a Uniform Civil Code in the state.

After his first cabinet meeting, Dhami had said that Uttarakhand will be the first state to implement UCC, however, quickly adding that “perhaps it is already in force in Goa”.

"Common civil code is definitely required at this point of time, it is very much required for the country, for Uttar Pradesh and for the people of the country," the deputy CM said.

“But when there are vote bank considerations everywhere, it definitely shows the politics of appeasement. But we are not in favour of this,” Maurya said.

During the election campaign in the recently held UP polls, Chief Minister Yogi Adityanath had also spoken in favour of one law for the entire country and had said the matter would be taken up at the right time.

The issue of the implementation of the Uniform Civil Code, however, does not enjoy the Opposition support besides that of Muslim bodies.

Senior socialist leader Shivpal Singh Yadav, however, has called for a Uniform Civil Code, in remarks that are being seen as another indication of his growing closeness with the ruling BJP in Uttar Pradesh.