The Election Commission's recognition to the Akhilesh Yadav faction as the Samajwadi Party and allotting 'cycle' symbol to it will have an impact on Uttar Pradesh assembly polls and might force both the Bahujan Samaj Party and the Bharatiya Janata Party to redraw their poll strategy. 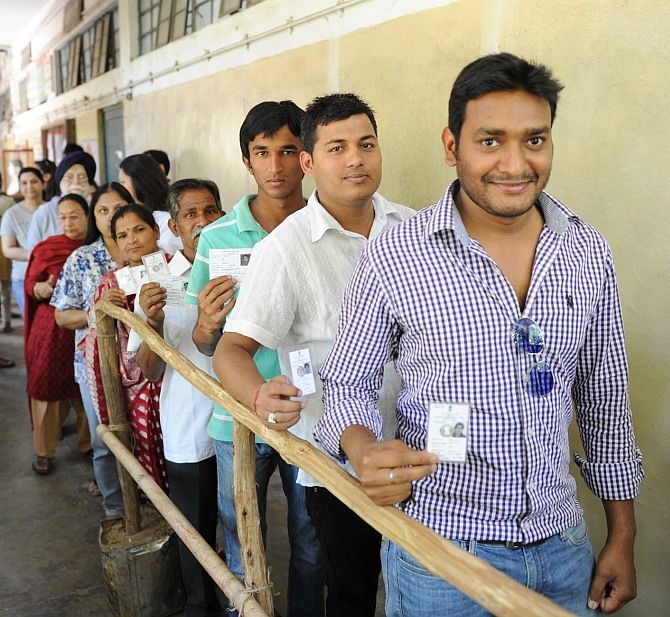 Both the parties had been banking heavily on the internal feud in the first family of the state with Mayawati projecting her party as the only force to take on the saffron brigade in the face of a weakened Samajwadi Party.

The BJP on its part was seeking to capitalise by promising development and law and order.

Akhilesh-led SP is likely to seal its alliance with the Congress later this week, a deal that would pitchfork the combine as the main contender against the resurgent BJP in the coming elections in UP.

The SP and the Congress together will seek to offer a stronger and cleaner alternative to the Muslim electorate which will be looking for a party that could defeat the BJP as the hustings.

Muslim voters, who account for nearly 20 per cent of Uttar Pradesh's population, can make or mar the electoral prospects of key political parties vying for the top slot in the high stake elections.

While divided Muslim votes translate to gains for the BJP, a consolidation will change the poll arithmetic as minorities play a crucial role in at least 125 of 403 constituencies.

Muslims are known to go with a party or alliance that stands the best chance to defeat the BJP and Akhilesh-led SP and Congress together could provide them this option.

This would also mean that the extent of Muslim support to the BSP will not be up to its expectations to see its candidates through.

Working on this equation, Mayawati gave tickets to Muslims in as many as 97 constituencies, but her old record of allying with the BJP for power in UP often returns to haunt her.

As ruling SP grappled with internal feud, BSP supremo Mayawati sought to fish in troubled waters, seeking to drive a wedge in the SP camp to wean away the crucial Muslim vote bank.

Muslims are considered the traditional vote bank of the ruling Samajwadi Party and the concern over SP family feud has been voiced by several top clerics including, Syed Ahmed Bukhari, the Shahi Imam of Delhi's Jama Masjid and Maulana Salman Nadvi of Lucknow-based Darul Uloom Nadwatul Ulama.

These leaders gave a blunt message to Mulayam Singh Yadav that their votes would end up with the BSP if the internecine war in his party did not end.

To project herself as the true saviour of the minorities, Mayawati has been continuously linking the SP and the BJP, often claiming that there was a "tacit understanding" between the two and asking voters to be wary of their "closeness".

The BJP has also been quoting lack of development and misgovernance of successive governments and promising people to make Uttar Pradesh as 'Uttam Pradesh' if voted to power.

Political analysts said a section of Yadavs and Muslims might still go with party patriarch Mulayam Singh Yadav but a majority of them will move towards the Akhilesh group as they look at him as a new hope in the state.

The 43-year-old chief minister has already proved his mettle at governance in the past five years and shown that development was the buzz word for him.

They say that armed with the EC order, Akhilesh will now be better placed to steer the party to a cleaner new image which will go down well with the people especially the young electorate.

Analysts also said the EC order might be a setback to some extent to the BJP and the BSP, which were banking on the family feud in the SP to give them an edge.

The BSP had expected Muslims to leave the SP and join its core votebank of Dalits to give it the requisite numerical advantage to bring it back to power.

But, the latest development could drive the BSP supremo to think of a fresh strategy, especially in the communally sensitive western UP -- where she anticipates a keen contest with BJP -- which goes to polls in the first two phases.

BSP insiders said the party was contemplating reassessing its strategy vis-a-vis Muslim vote bank which has strongly been siding with the SP post Ramjanmbhoomi-Babri Masjid issue.

Sources said Mayawati had directed her deputy Naseemuddin Siddiqui and his son Afzal to step up the BSP campaign in western UP to mobilize Muslim voters and showcase the party that can halt the saffron surge.

Naseemuddin had met Shia cleric and convener of Majlis-e-Ulema-e Hind, an outfit of Muslim ulemas, Kalbe Jawad on Monday soon after the EC order.

They said Mayawati was of the firm view that wooing Muslims and galvanizing them with her core Dalit vote bank could drum up a formidable alliance to take on the BJP, which will stand to gain in the event of Muslim votes getting split between the SP and the BSP.

Analysts say a Bihar-like 'maha-gathbandhan' in UP could keep the Muslim flock together.

The BJP too seems to be redrawing its strategy by roping in as many Muslim voters as possible by showing itself as the primary opponent of SP.

The saffron party expects to gain those Muslim voters who have become disenchanted with the SP, especially after Muzaffarnagar riots of 2013, in which over 60 people were killed and around 50,000 rendered homeless.

Some sections of Muslims are also unhappy with the SP government which has no so far fulfilled its promise to ensure 18 per cent quota for them despite the fact that reservation is not on basis of religion.

The Congress too is making frantic efforts to regain its lost moorings in the state and has appointed Ghulam Nabi Azad as its state incharge hoping to attract a huge chunk of Muslim votes.

Muslims, who constitute a fifth of the state's population of nearly 200 crore, are yet to open their cards as to which way they will go, though the community is the cynosure of all eyes in the political circles.