The Central Bureau of Investigation has come across layered financial transactions undertaken by officials and politicians accused in the Uttar Pradesh National Rural Health Mission scam to cover tracks of illegal gratification and has involved Income Tax department and Financial Intelligence Unit to unearth the money trail.

Agency sources said huge amounts of illegal gratification was allegedly given by beneficiary firms, for awarding centralised contracts under NRHM for the entire state, to the then UP Family Welfare Minister Babu Singh Kushwaha, Secretary Pradeep Shukla, MLA Ram Prasad Jaiswal and other accused.

The sources, without specifying the names of accused, said some of those named in NRHM cases have allegedly laundered the money to companies in Delhi, West Bengal, Uttar Pradesh using services of their chartered accountants.

The alleged bribe amounts were brought to accounts of companies and trusts owned by accused and their relatives only after multiple routing and layering, they said.

The amounts once received in these companies and trusts were invested into real estate and other immovable estate acquired by the accused, they said.

favours to the beneficiary firms.

NRHM scam and has also sought help of Financial Intelligence Unit of the country.

The FIU has access to suspicious transactions which take place in the banks across the country and can help in locating the alleged laundering of money which was routed back into real estate and other immovable assets by the accused, the sources said.

The CBI has given the FIU a list of the accused to track any suspicious transactions and cash transactions undertaken by them across the country, the sources said.

To unravel the alleged routing of funds, the agency is also taking help of chartered accounts, they said.

The agency which has arrested nearly 13 persons in various cases under the scam has recovered Rs 9.5 crore cash, 5.4 kg gold, properties worth over Rs 37 crore and foreign currency from the premises of accused persons, sources said.

Those arrested by CBI so far in the case include Kushwaha, Jaiswal, Shukla and several officials from UPSIC and CDS officials of Jal Nigam.

The CBI which has registered 13 cases in connection with the scam and already filed three charge sheets. It is likely to file some more charge sheets in the first week of June.

With the mammoth scam spread across 72 districts, the CBI is finding it difficult to probe small time corruption which took place at district level because of its limited manpower. 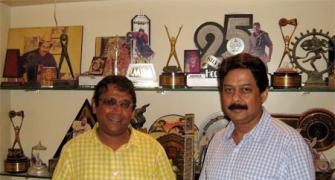 'We were forced by directors to plagiarise songs'
UP: CBI files charge sheet in CMO murder case