Police arrested four people on Tuesday and were hunting for a Bajrang Dal activist in connection with mob violence in Bulandshahr that left an inspector and a passer-by dead, as angry families demanded action amid criticism of the Uttar Pradesh chief minister and suggestions of conspiracies. 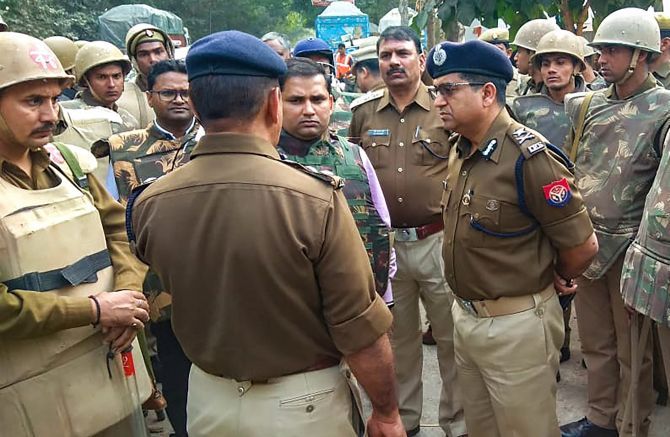 IMAGE: Policemen stand guard after a violent protest over the alleged illegal slaughter of cattle, in Bulandshahr. Photograph: PTI Photo

Tears rolled down the eyes of family, friends and colleagues of slain Inspector Subodh Kumar Singh when the body was consigned to flames in a state funeral on Tuesday evening.

After initial protests, the family of the other victim, 20-year-old Sumit Kumar, agreed to conduct his last rites.

Sumit Kumar was also named as one of the accused in the first information report registered early Tuesday morning. The local residents wanted his name struck off from there.

A mob of some 400 people, including right-wing activists, fought pitched battles with police on Monday in Siana area of Bulandshahr district, apparently after the former were angered by the discovery of cow carcasses strewn in a nearby jungle.

They set fire to dozens of vehicles, hurled stones and also fired at police who retaliated with gunfire.

In the violence, Inspector Subodh Kumar Singh, the station house officer of Siana, and Sumit Kumar were killed.

A video emerged on Tuesday showing a young man with his hand over a bleeding wound near the abdomen, being helped by other people as they all run. Someone is heard saying the man has been shot.

It was not clear if the man is Sumit Kumar.

The National Human Rights Commission issued notices to the state government and the director general of police over the incident, officials said.

Police said on Tuesday four persons were arrested, but the main suspect, Bajrang Dal district convenor Yogesh Raj, was on the run.

They said 27 people have been named in the FIR while cases have been lodged against 50-60 unidentified people.

Of the 27, at least four are workers and functionaries of right-wing organisations such as Bajrang Dal, the officials said.

There was heavy deployment of security forces in the area and tension spiralled as angry families demanded justice for their kin.

There was confusion about the number of those arrested with police officials first saying four, then three and finally four again.

Additional Director General of Police (Law and Order) Anand Kumar told reporters that six police teams were working on the case and trying to identify the accused by monitoring video footage.

"Tension has eased in strife-torn Bulandshahr and efforts are on to ensure there is no trouble in future," he said in Lucknow.

Though both Singh and Sumit died of gunshot injuries, the inspector, who was posted at the Siana Police Station, also received injuries from hard and blunt objects, Kumar said.

As police continued their investigations, emotions ran high with the families preparing for the last rites.

The dead policeman's son Abhishek said his father wanted him to be a good citizen who doesn't incite violence in the name of religion.

"My father has lost his life in this Hindu-Muslim dispute. Whose father is next?" he asked tearfully.

Abhishek said he last spoke to his father when he phoned him to inquire whether he had studied and eaten. 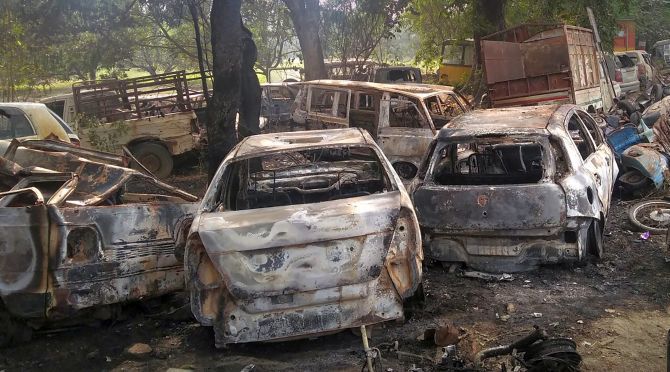 IMAGE: The charred vehicles which were set on fire by a mob in Monday's violent clashes over the alleged illegal slaughter of cattle in Bulandshahr. Photograph: PTI Photo

Demanding ‘martyr’ status for the slain inspector, who was one of those who initially probed the 2015 lynching of Mohammed Akhlaq, his sister alleged his killing was a conspiracy of the police.

"My brother was killed in a police conspiracy as he was probing a cow slaughter case... He should be given martyr status and a memorial should be constructed in his name in our native place," Sunita Singh told reporters.

"The cow is our mother, I accept it. My brother has given his life for her. The CM used to chant 'gau... gau... gau'... Why can't he come for 'gau raksha'," an emotional Sunita Singh asked, hitting out at Uttar Pradesh Chief Minister Yogi Adityanath.

In Chingrawathi village, Sumit's family initially refused to conduct his last rites until the government assured Rs 50 lakh compensation, pension to his parents and a police job to his kin.

They agreed to cremate him after the district administration announced a compensation of Rs 5 lakh.

The BJP legislator said locals from the two villages of Mahaw and Chingrawathi had found the carcass of a cow and reported the matter to the police on Monday morning.

"Police should have registered the case, filed an FIR and taken action accordingly," Lodhi told PTI.

Congress leader Manish Tewari described the incident as ‘very sad and condemnable’, and claimed attempts were being made to instigate communal violence ahead of the polls.

While the Bahujan Samaj Party chief Mayawati blamed the ‘irresponsible and wrong’ policies of the BJP government in Uttar Pradesh for the mob violence, the Communist Party of India-Marxist said Chief Minister Yogi Adityanath's ‘communally provocative speeches’ were responsible. 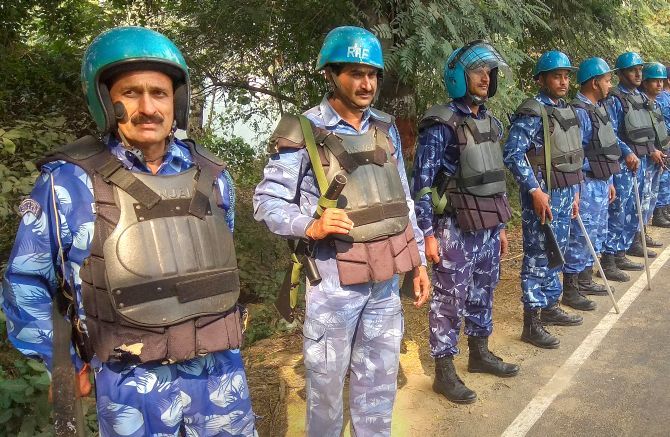 IMAGE: Rapid Action Force deployed in the city a day after incidents of violence erupted over the alleged illegal slaughter of cattle, in Bulandshahr. Photograph: PTI Photo

All India Majlis-e-Ittehadul Muslimeen leader Asaduddin Owaisi alleged that those fuelling violence in the name of the cow had been receiving full protection from the BJP and the Rashtriya Swayamsevak Sangh.

According to Additional Director General (Meerut zone) Prashant Kumar, the protesters from Mahaw village and nearby areas pelted stones on police and indulged in arson, set ablaze vehicles and the Chingarwathi police post, after some body parts of cows were found in a jungle near the village, prompting the police to open fire.

Sumit aspired to be a cop, had gone to drop a friend

Sumit Kumar, who had aspired to become a policeman, had come home only 20 days ago to assist his father with farm work but due to a tragic coincidence he got caught in the mob violence and died, says a cousin.

The 20-year-old was a simpleton and determined to get into the police services for which he was training and had joined coaching classes away from home.

"He would have become a police officer," his mother wailed as she held on to his body this afternoon before it was taken for the last rites.

Sumit's cousin Anuj Kumar, 23, said that after clearing 12th he started B.Com but dropped out of it after one year. 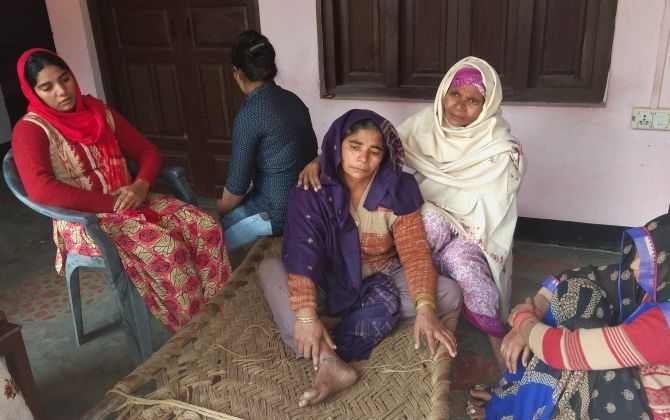 IMAGE: Geeta, mother of 20-yr old Sumit Kumar who was killed in Monday's mob violence, mourns along with other family members at their village Chingrawati, in Bulandshahr, on Tuesday. Photograph: PTI Photo

He then started BA (private) and had completed two years from a college in Lakhaoti in Bulandshahr.

"He had filled forms for job in Delhi Police and Uttar Pradesh police. He was determined to get selected in the police department and would go out for jogging and physical exercise every morning. He had also joined gym for a while," Anuj told PTI.

He said two of his sisters, Meenu and Manju, live in Kasna in Greater Noida where they work at a call centre and Sumit would often stay with them. Sumit had done his Class 11 and 12 from Kasna and on and off he would come home in his village.

"Twenty days ago, they had sent him to assist his father with the farm work and to prepare for the exams at home," Anuj said.

On Monday, the day the violence happened, a friend of Sumit had come from Barauli, a village nearby, to extend an invitation for his wedding.

The friend had asked Sumit to drop him at the bus stand on the main road near Chingrawathi village on his return.

While they were at the bus stand, violence broke out near Chingrawathi police post, which is close to the bus stand, but Sumit was not aware of its intensity.

"It was on for two hours and he thought it must have got over. Small disputes and fights happen (often) and crowd gather outside the police post but something of this level was not imagined," Anuj said.

It must have been only minutes since Sumit reached the main road with his friend that his brother got a call informing him that Sumit has been injured.

"Vineet was towards the field and he rushed to the spot. My father, Dheeraj Singh, was leaving for Siana town, around five km, for some work but he also rushed to the spot. From there, they took him (Sumit) to a local hospital where doctors said he should be taken to Meerut, about 90 km, for treatment.

"His father and mother directly reached the local hospital, from where Vineet, his father and one sister, Bublee, took him to Meerut while I brought tai ji (Sumit's mother) back home here," he said.

Anuj, who works as an assistant at a private hospital in Siana, said their families are simple and have nothing to do with politics.

"Sumit was a nice person, he had no issues or enmity with anyone nor was he involved in any sorts of politics. No one from our family, neither my father nor uncle is into politics, they are both farmers," he said.

Kishor Dwivedi in Bulandshahr
© Copyright 2021 PTI. All rights reserved. Republication or redistribution of PTI content, including by framing or similar means, is expressly prohibited without the prior written consent.