Yogi govt puts up banners with info of anti-CAA protesters

Authorities in Lucknow put up roadside banners with photographs of people asked to pay compensation for damage to public property during anti-Citizenship Amendment Act protests, triggering outrage among those being named and shamed. 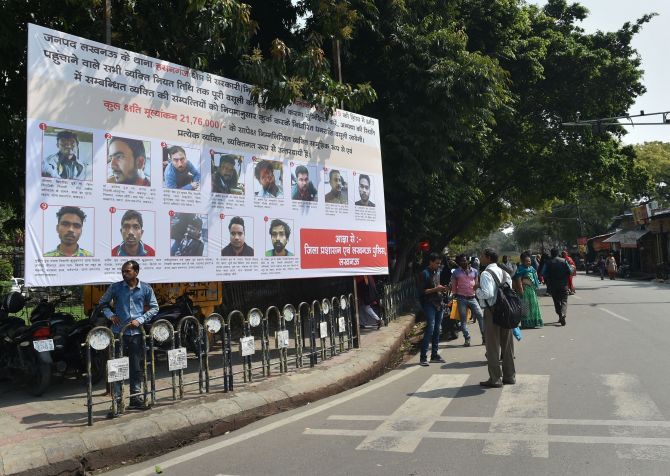 The banners came up at major road crossings in Lucknow late on Thursday night on the directions of Chief Minister Yogi Adityanath, an official said.

They bear photographs, names and addresses of those accused of vandalism during protests in December against the Citizenship Amendment Act.

Some activists who figure in the posters have said they will go to court over the 'public humiliation' when the charges against them are yet to be proved.

Opposition parties, including the Samajwadi Party and the Congress, lashed out at the Bharatiya Janata Party government for branding the protesters guilty.

A government spokesman said the posters have been up on the chief minister's directive at important intersections, including the main crossing in the busy Hazratganj area and in front of the Assembly building.

He said the people on the posters are those who had damaged public property under the pretext of protests, and notices have already been issued seeking compensation from them.

The posters say that property of the accused will be confiscated if they fail to pay the compensation.

Activist-politician Sadaf Jafar, who is among those whose photos appear on the posters, termed the move unethical and vowed to take legal recourse.

"How can we be publicly humiliated for something that has not yet been proved in court," she said.

"This is not Afghanistan. Legal issues cannot be brought into public like this. Our bail order says there is no adequate evidence against us," Jafar told PTI.

"We are not absconding," she said, adding that they have appeared before the court and police whenever asked.

"Why are we being targeted like this? Did they put up posters of Vijay Mallya and Nirav Modi at all airports? Had they done it they would have not fled with the country's wealth," she said, referring to the two absconding businessmen.

"Our life, property and freedom have been put in jeopardy by putting up these posters and our reputation has been damaged," he said.

Darapuri added that he is writing to the state home secretary, director general of police and police commissioner, telling them that if they faced any trouble because of the posters, it would the administration's responsibility.

"We will challenge it in court collectively and demand the immediate withdrawal of the posters as well as action against the officials responsible for it," Darapuri said.

Samajwadi Party president Akhilesh Yadav asked how the government could publicly declare someone a culprit without a court order.

"The BJP government is out to crush all those opposed to it. These posters cannot be termed as right in any way. Announcing anyone a culprit is against the democratic system," Yadav said.

Uttar Pradesh Congress Committee president Ajay Kumar Lallu said the courts need to take cognizance of the posters on their own.

"Police so far have not been able to produce proper evidence in the court against these people," Lallu said.

The Congress leader said Chief Minister Yogi Adityanath himself faces cases against him and if recoveries are to be made, they should start from him.

Recovery notices have already been issued for this. If police get more evidence and other people are identified, more notices will be served, the DM said.

He said the recovery notices allow a 30-days period for their implementation. After this, the offenders' property will be confiscated.

In Lucknow, around 50 people were identified by police as alleged rioters and were served such notices.

After the violent protests in December, Adityanath had warned that those who took part in any vandalism will have to pay for the damage.