Internet services have been suspended in several areas till Monday, while prohibitory orders remained in force across the state. 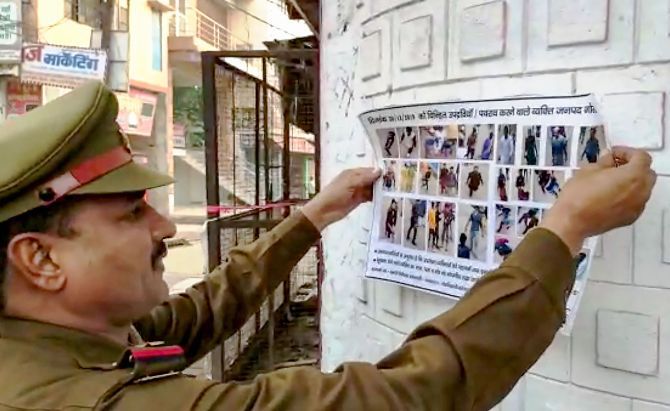 IMAGE: : A police personnel sticks a collage of people involved in violence during protest on Friday after Juma Namaz against CAA and NRC, obtained from video footage and CCTV camera footage, in Gorakhpur, on Saturday. Photograph: PTI Photo

Blaming 'outsiders' for the violence during protests against the amended Citizenship Act, the Uttar Pradesh government on Sunday said six people from West Bengal associated with Islamic outfits Popular Front of India and Students' Islamic Movement of India have been arrested, even as authorities 'detained' a Trinamool Congress delegation at Lucknow airport when it was heading to meet the families of those killed in the clashes.

After days of violence that claimed at least 16 lives and left hundreds of people, including policemen, injured in Uttar Pradesh, the situation remained by and large peaceful in the state capital and other districts like Meerut, Firozabad, Kanpur and Bijnor.

Meanwhile, the death toll in the violence that occurred during protests against the Act in Meerut two days ago rose to five, a senior police official said on Sunday.

The deceased have been identified as Mohsin, Aasif, Zahir, Aalim, all residents of Meerut, and Asif from Delhi, Inspector General Alok Singh said.

During the protests on Friday, protesters had torched vehicles and pelted stones at police, who used lathi charge and lobbed tear gas shells to disperse mobs.

They are undergoing treatment at different hospitals in the city, Singh said.

Police have arrested 102 people in connection with the violence and efforts are on to nab the other suspects, he added.

Internet services have been suspended in several areas till Monday, while prohibitory orders remained in force across the state.

In Muzaffarnagar, 48 people have been arrested and 67 shops sealed in connection with violent protests last week during which several persons, including over a dozen policemen, were injured and vehicles gutted, officials said on Sunday.

24 more cases were filed by the police but these have been registered against unnamed people, invoking IPC sections related to arson, rioting and attempt to murder.

The town witnessed violent protests against the amended Citizenship Act after Friday prayers.

Incidents of stone-pelting, arson and loot were reported from some localities during which several protesters were injured.

At a hurriedly convened press conference in Lucknow, Deputy Chief Minister Dinesh Sharma 'outsiders' role' in the incidents of violence reported from various districts of the state during demonstrations against the Citizenship (Amendment) Act and that protesters had used illegal firearms.

He said that six people hailing from West Bengal's Malda district, associated with the PFI, had been arrested by the state police.

"There is involvement of Popular Front of India (PFI). They have connection with SIMI. Six people from Malda have been arrested," he said.

Students' Islamic Movement of India or SIMI is a banned terror outfit.

Sharma's statement came on a day a four-member TMC delegation from West Bengal, which was planning to meet the families of those killed in Uttar Pradesh during protests over the new citizenship law, was 'detained' at Lucknow airport on Sunday afternoon.

One of the delegates Nadimul Haque, an MP, said he and other party members were staging a sit-in near a hangar at the Chaudhari Charan Singh airport.

"We have been detained at Lucknow airport. As soon as we got down from the aircraft, we were surrounded by police and were taken by the police to a secluded spot on the runway. We are staging a dharna near a hangar," Haque told PTI over phone.

TMC chief and West Bengal Chief Minister Mamata Banerjee has been one of the most vocals critics of the new law and has been leading protests in her state on the issue.

Sharma told reporters that as many as 288 police personnel sustained injuries, of which 62 were due to firearms, during the violent protests.

"About 500 empty cartridges of prohibited bore have been found. This indicates that the protestors were using illegal weapons," he said.

So far, 705 people have been arrested in connection with the violence.

He blamed the opposition Samajwadi Party for worsening the situation.

"The opposition is inciting people by making false statements," he said.

Sharma's remarks came minutes after Samajwadi Party chief Akhilesh Yadav attacked the ruling Bharatiya Janata Party alleging that the new citizenship law has been brought in to 'divert the attention' from the 'virtually destroyed' economy and rising unemployment.

Addressing a press conference in Lucknow, Yadav said people were made to stand in line to withdraw cash during the demonetisation exercise and now they will have to stand in queue for their rights due to National Register of Citizens.

"The economy in dire straits, has been virtually destroyed, unemployment is at an all-time high. To divert the attention from these issues, CAA was enacted," he said.

Meanwhile, as a first step towards making protesters pay for causing damage to public properties during agitations against the Citizenship (Amendment) Act, the Uttar Pradesh government began the process of identifying the vandals, with the Lucknow district administration forming a four-member panel to assess the damage.

The Rampur district administration is also taking steps to attach assets of 25 people, identified as ones vandalising public properties during violent protests against changes in the citizenship law, officials said on Sunday.

A 22-year-old man had died of bullet injury received during the violence in Rampur on Saturday in which several locals and policemen were injured. Six vehicles, including a police motorcycle, were torched, they said.

"We have got CCTV footage and so far identified 25 people involved in the violence. FIRs are being registered and the process to attach their properties and further actions as needed has begun," Rampur District Magistrate Aunjaneya Singh told PTI.

He said around a dozen protesters were detained after stone pelting and arson during a bandh call in the city, but some of them were released after inquiry.

The Gorakhpur police had on Saturday released photographs of around 50 people allegedly involved in protests against the amended citizenship law here after the Friday prayers. The police said the troublemakers have been identified from the video footage.

"Around 50 people involved in the violence have been identified through video footage and their pictures will be put up all crossroads and major spots," Kotwali Circle Officer V P Singh had said.

The move comes days after Chief Minister Yogi Adityanath said that properties of all those involved in violence would be confiscated to offset the damage.

Protests against Citizenship (Amendment) Act that broke out in several districts of Uttar Pradesh on Thursday.

The amended citizenship law allows citizenship to Hindus, Christians, Sikhs, Buddhists and Parsis who entered India till 2014 after facing religious persecution in Pakistan, Afghanistan and Bangladesh. The list excludes Muslims.

Adityanath had said that the wrong-doers would be identified with the help of CCTV footage, video clips and photographs.

The chief minister had said that property of those involved in the violence would be seized and auctioned to compensate destruction of public assets during the protests over the amended citizenship law.

"There is no place for violence in a democracy... those damaging property have been captured in video and CCTV footage," he had said, while appealing to people to maintain peace.

The action is based on a Supreme Court order that rioters would be strictly made liable for the damage and compensation would be collected from them.

Opposition Rashtriya Janata Dal in Bihar has cracked the whip on three of its workers in Bhagalpur district, who were identified among those indulging in vandalism a day ago during the statewide bandh called in protest against the amended citizenship law and proposed National Register of Citizens, the party said in Patna on Sunday. 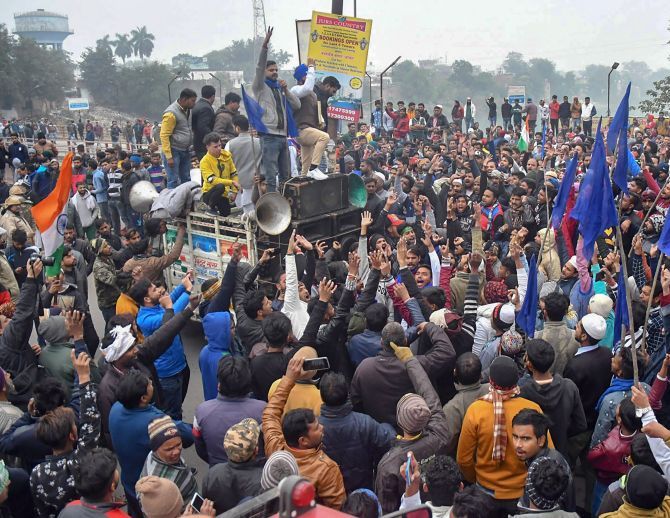 "While Yadav was the district unit president, Chand headed the youth wing in Bhagalpur. Shahzada is an active member of the RJD. The action has been taken in view of their involvement in vandalizing an auto rickshaw, in defiance of the party's strict instructions that no violence should take place during the bandh," he added.

"The party has also decided to pay damages to the aggrieved auto rickshaw driver," Gagan said.

The bandh, which was supported by the Congress and other constituents of the five-party Grand Alliance, was marked by large-scale disruption of traffic, vandalism and arson.

In the state capital, a journalist and a cameraman were manhandled by bandh supporters while the vehicle of another news channel was damaged by the irate agitators.

Headed by jailed former chief minister and ex-Union minister Lalu Prasad Yadav, the RJD -- often accused of promoting lawlessness -- has been flayed by parties like the Bharatiya Janata Party and the Janata Dal-United for the chaos that gripped the state for several hours on account of the shutdown.

The party, now spearheaded by Prasad's younger son and heir apparent Tejashwi Yadav, has been attempting an image makeover in the run up to the Assembly polls, due next year, with workers, at some places, seen urging people to support the bandh on Saturday by smilingly greeting them and presenting them with flowers. 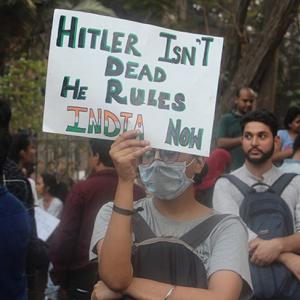