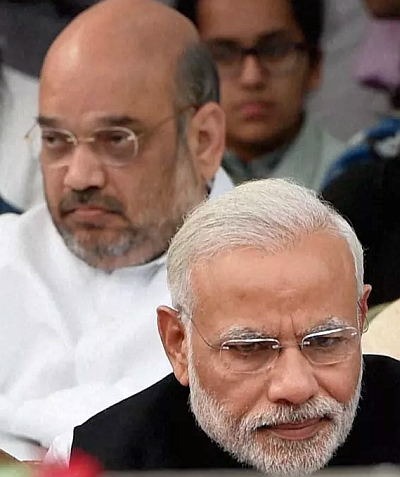 The Bharatiya Janata Party, which has been taking potshots at the Akhilesh Yadav government over lawlessness in Uttar Pradesh, finds itself in no position to take the high moral ground, data shows.

In their election campaign rallies across Uttar Pradesh, Prime Minister Narendra Modi and Bharatiya Janata Party chief Amit Shah have been emphasising how the state had slipped into anarchy and become the crime capital of the country under the Samajwadi Party administration.

However, the National Crime Records Bureau's 2015 statistics may prove that the duo clearly had got their crime figures wrong.

That said, the fact is the crime graph in Uttar Pradesh has over the years been showing an upward trend.

There were 27 states and Union territories with higher incidence of rape than Uttar Pradesh in 2015, including 15 states with a population above 10 million. Also, while incidents of kidnapping have also seen a spike, the rate of murder has  remained the same since 2012.

Then again, the BJP, which has been taking potshots at the Akhilesh Yadav government over lawlessness in the state, finds itself in no position to take the high moral ground.

Data analysed by Uttar Pradesh Election Watch and Association for Democratic Reforms show that most of the criminal candidates in fray are either associated with the BJP or the Bahujan Samaj Party.

The phase-wise party breakup of candidates with criminal records is given below:

The BJP topped the list with 29 criminal candidates, followed by 28 in BSP, 19 in Rashtriya Lok Dal, 15 in Samajwadi Party, 6 in Congress, and 71 Independents.

In Phase 2, of the 721 candidates from 92 political parties and 206 independent candidates in the fray, 107 (15 per cent) have criminal cases against them.

As many as 84 candidates had declared serious criminal cases, ADR said.

It added that 82 had declared serious criminal cases -- cases related to murder, attempt to murder, kidnapping, crimes against women etc.

These included 21 candidates each from the BJP and the BSP, 5 from the RLD, 13 from the SP, five from the Congress and 13 Independent candidates who have declared criminal cases against them in their affidavits, the report said.

Out of 680 candidates in Phase 4, 116 have criminal cases against them.

Here too, the BJP takes the lead with 19 candidates with criminal cases, followed by 12 from the BSP, 9 from the RLD, 13 from the SP, eight from the Congress, and 24 Independents.