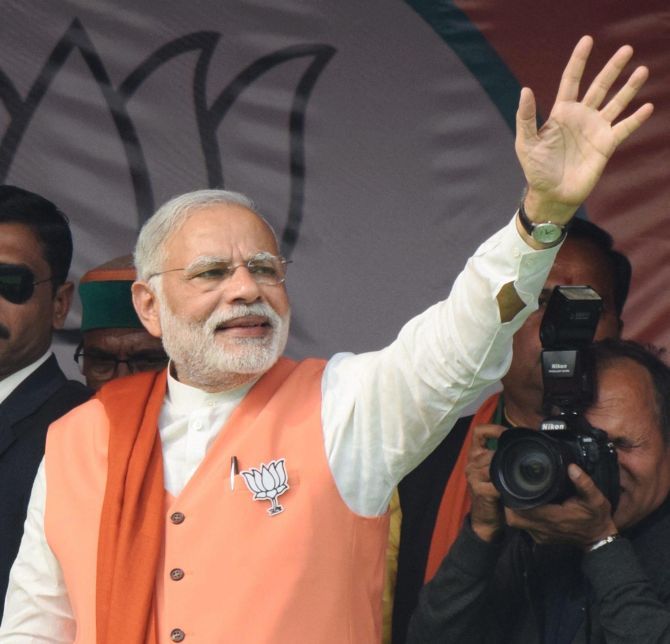 Prime Minister Narendra Modi on Sunday lambasted the Samajwadi Party government for its ‘failure’ to maintain law and order in Uttar Pradesh, saying ‘goonda raj’ was prevailing there and even the Supreme Court has had to intervene to get a minister booked in an alleged rape case.

"The SC had to intervene to get the FIR (first information report) registered against Gayatri Prasad Prajapati. 'Goonda raj' is prevailing all over UP and police stations have become Samajwadi Party office," Modi said at an election rally in Fatehpur.

With the apex court breathing down its neck, UP police of Saturday filed an FIR against the tainted minister in connection with cases of alleged gang-rape and attempt to rape a woman and her minor daughter.

“The glow has disappeared from Akhilesh Yadav’s face, his voice has become feeble, he is afraid and looking for right words while talking to media,” he said, adding that the Samajwadi Party chief has ‘accepted that he has lost the game’.

“Why is the policing system so inefficient in UP? Why are complaints not registered? What work culture is it? The SP is least concerned about improving law and order situation in UP. I urge people to elect a government that will ensure safety of people,” he said, putting SP government on the dock.

Modi referred to the CM’s rally to campaign for Prajapati and wondered whether ‘the (Congress-SP) alliance was as holy as Gayatri’.

Prajapati, who is contesting as a candidate of the alliance in the prestigious Amethi constituency, was sacked by Akhilesh from his cabinet in 2016 but later reinstated in the council of ministers sans the lucrative mining portfolio.

Terming SP’s alliance with Congress as an ‘insult’ of socialist leader Ram Manohar Lohia, he said, “The SP has insulted Lohia by forging alliance with the Congress.”

In a jibe at Congress vice president Rahul Gandhi without taking his name for forging alliance with the SP, Modi said, “Those born with silver spoon in mouth have realised that the situation is not in their favour on the ground. After ‘27 saal, UP behal’ slogan, the Congress was compelled to form alliance with the SP because of this reason.”

The prime minister also said development has been ‘in exile for 10 years’ in Uttar Pradesh.

Modi also took a dig at the Chief Minister over the rift between him and his father Mulayam Singh Yadav.

“UP is like my ‘mai-baap’ (parent). I am not a son who will ditch his ‘mai-baap’. I will always take care of Uttar Pradesh,” Modi said.

Highlighting the initiatives taken by his government, Modi said development of the state will get a significant boost if the Bharatiya Janata Party formed government here and asked the people across the state to vote for the BJP and ensure development on priority.

On the Congress, he said he would like to ‘laugh at their ideology’ as during 2014 polls, they promised the people that they would raise number of subsidised cylinders from 9 to 12.

“Over 1.15 crore people gave up their LPG subsidy on my request. My mother used to cook food using wood as fuel. I used to feel so bad about it. 1.45 crore poor people got LPG connection after we came to power,” he said.

“You all were being looted in the past over LED bulbs. You were charged 300 to 400 rupees for a bulb. After we came to power, we ensured that the poor get LED bulbs at a cheap price. Now you get them at Rs 80 to Rs 90,” he said.

Claiming that the BJP worked on the principle of ‘Sabka Saath Sabka Vikas’, Modi said ‘people come to you asking for votes on the basis of caste and religion but only the BJP thinks about your development’.

“It is the responsibility of a government to ensure that there is no discrimination. We are determined to do that. Why is it that for securing jobs, one has to bribe? This must end. Youth should get jobs on the basis of their merits.” he said.

Recalling Sardar Vallabh Bhai Patel, he said ‘had the previous governments implemented his guidelines, fate of our country would have been different’.

Stressing that there should be ‘no discrimination on the basis of caste and religion’, Modi said, “Sabka saath, sabka vikas is our mantra.”

"Agar Ramzan mein bijli aati hai, to Diwali me bhi aani chahiye, bhedbhav nahi hona chahiye (If there is electricity during Ramzan, it must also be available during Diwali, there should be no discrimination)," he said.

The prime minister also said if there is a ‘kabaristaan’ (graveyard), there should be a ‘shamshaan’ (cremation ground) too.