Blaming Akhilesh Yadav for "sleeping over" the demand for justice by a "beti" in the rape case against Gayatri Prajapati, Prime Minister Narendra Modi on Saturday said the voters in Uttar Pradesh have got an opportunity to perform the pind daan (last rites) of their "tormentors". 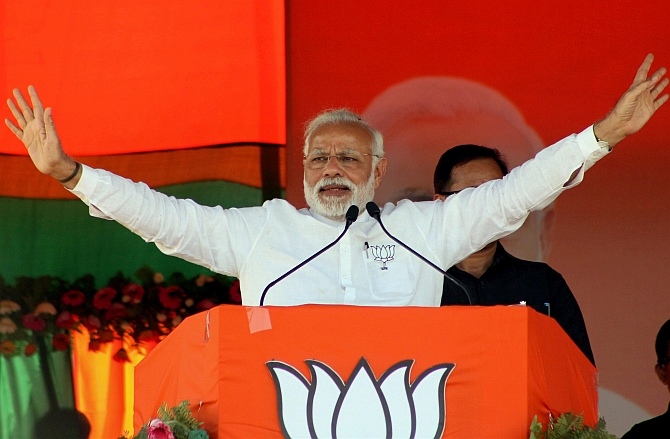 He also said that unlike the BJP, its opponents believed in "kuch ka saath, kuch ka hi vikas (with a few, development of a few)".

"In this country, when we do something good, we chant the Gayatri mantra. But, the SP-Congress alliance is chanting the Gayatri Prajapati Mantra.

"A case has been lodged against him (but) the chief minister went to campaign for him while he (Gayatri) was present there...Now, the police cannot trace him," Modi told an election rally in Jaunpur, UP.

"A daughter is seeking justice and the chief minister is shielding the gunehgaar (guilty)...What bigger blot can there be than this that in Uttar Pradesh, when a buffalo goes missing, the government runs to find it.

"But, a girl is crying for justice and the police and chief minister are sleeping...Such a government needs to be punished," he added.

Prajapati was present at a poll meeting addressed by Akhilesh at Amethi, from where he is re-contesting on an SP ticket, even after he was booked at the behest of the Supreme Court in the cases of alleged rape of a minor girl and alleged gangrape of her mother.

Modi's buffalo remark was in the context of the Uttar Pradesh police running from pillar to post to track down the milch animals of state minister Azam Khan which were stolen.

Modi alleged that while the BJP went by the "sabka saath, sabka vikas" mantra, the aim of its political opponents was "kuch ka saath, kuch ka hi vikas" and stressed that peace, unity and brotherhood alone could usher in development.

Calling on the electorate to vote for the saffron party, the prime minister said, "You have got an opportunity to perform the pind daan (last rites) of your tormentors in the last phase of polling on March 8.

"...You are getting an opportunity to perform the pind daan of those, who have committed sins with Uttar Pradesh and ruined the state, by voting for the BJP, Apna Dal and Bhartiya Samaj Party, and send them packing," he said.

On Akhilesh's 'kaam bolta hai' (work speaks) slogan, Modi alleged that after he "exposed" the state government at his Deoria and Maharajganj poll meetings by referring to the "poor" state of affairs in UP as mentioned in the government website, the content was removed.

"The SP government is saying kaam bolta hai...I want to ask whether it is kaam (work) or karnama (misdeeds) which is speaking.

"They felt bad as to why is Modi saying this...When I talked about the state of affairs as mentioned in the government website, they got frustrated that they have been exposed and their 'karname' have come out. Orders were issued to remove that page...Is there a bigger example of karnama?" he asked.

On the Centre's offer to provide electricity to Uttar Pradesh, which was not accepted by the state government, Modi asked the crowd about the power scenario in Jaunpur.

"Your chief minister says you are getting power...Is he telling the truth...He is trying to mislead the voters at the time of election. Will you believe such people...They want power only in Saifai (the native place of the Yadavs), not in Jaunpur...Their favourites and their areas will get it but not you," he alleged.

Noting that the condition of the roads in the area is poor, Modi targeted the "new friendship" between Akhilesh and Rahul Gandhi and said, "Akhileshji tells me if I travel on the Lucknow-Agra expressway, I will vote for the SP. I am asking him to ride a bicycle on the Kheta Sarai-Khuthan road in Jaunpur with his new yaar (friend) on the pillion...He himself will not vote for the SP."

The prime minister assured the people that if they gave his party a majority in the assembly, he will give them accountability.

"There are reports that the BJP is getting a full mandate. Now, it is your turn to ensure heavy polling to give us a bonus, so that no one gets the excuse not to develop the state...You can take an account from me in the 2022 (next Assembly) election," he said.

Starting his speech by saluting the land of Jaunpur which has given many soldiers and describing it as the "land of sacrifice", Modi regretted that people at times forget their ethics and culture and commit sins that are unforgivable.

"When the army conducted the surgical strikes, it destroyed the enemy camps and came back to our motherland before sunrise. This was very courageous and every minute detail (of the operation) was planned.

"The surgical strikes by India are being studied the world over," he said, alleging that there were some, "lost in their political greed", who asked the army for proof.

"I want to tell them, go to Jaunpur and meet the mothers of those who have sacrificed their lives for the motherland. And you dare question them?" Modi asked.

"The election results will be out soon and it will be a wipeout for the SP, the BSP, the Congress and the BJP will win...Uttar Pradesh will celebrate Holi on March 13," he said.

Referring to the law-and-order situation in the state, the prime minister said, "In Jaunpur, after the sun sets, can your mothers and sisters step out of the house? Should they not have the right to live peacefully as men do?"

Modi's speech was disrupted a couple of times due to the over-enthusiasm of the crowd. He also had to ask a man to come down from a scaffolding, saying, "If you fall, I will be blamed for it."