A local court in Barabanki dismissed a petition seeking registration of a criminal case against actor Amitabh Bachchan. The case was sought to be registered by a woman village head of Daulatpur village , who demanded action against Bachchan for allegedly "defrauding and cheating" the local population by not honouring his commitment of building a women's college there.

The college, according to Bachchan's own announcement , was to be named after his star daughter-in-law Aishwarya Rai in that village. The court had directed the local police to carry out a preliminary inquiry on the charges leveled against Bachchan .

While police declined to divulge the contents of the findings, it is learnt that the report completely absolved Bachchan of the multiple charges leveled by the illiterate village head Raj Kumari. "The complaint appears to frivolous as none of the charges could be substantiated by facts", a Barabanki police official said.

In an application moved before the court of chief judicial magistrate, Barabanki , Raj Kumari has accused Bachchan of "playing fraud" on the people of the village by "deceiving the local population in the name of building a women's college ."

She even charged Bachchan of threatening her with dire consequences when she approached him to honour his commitment to the local population. Earlier, Bachchan has faced charges of acquiring 2.5 bighas of agricultural land owned by the local 'gram sabha' allotted in his name through "fraudulent means". Subsequently , he purchased three bighas of private land . Together with his close friend , Samajwadi Party general secretary Amar Singh , he traveled all the way to Daulatpur village in 2006 along with his wife Jaya , son Abhishek and daughter-in-law Aishwarya. And amidst much fanfare , he declared that the college would be named after Aishwarya.

However, there was no activity on the plot in all these years, following which the village head moved the court . Meanwhile , Bachchan transferred the controversial plot of land to Nishha Foundation , a trust run by filmstar turned Samajwadi Party MP Jaya Prada. 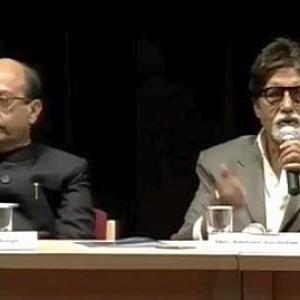