Amid growing criticism by the Islamic countries over controversial remarks made by now-suspended and expelled Bharatiya Janata Party leaders against Prophet Mohammad, India on Monday slammed the comments by Organisation of Islamic Countries as "narrow-minded" and "motivated, misleading and mischievous". 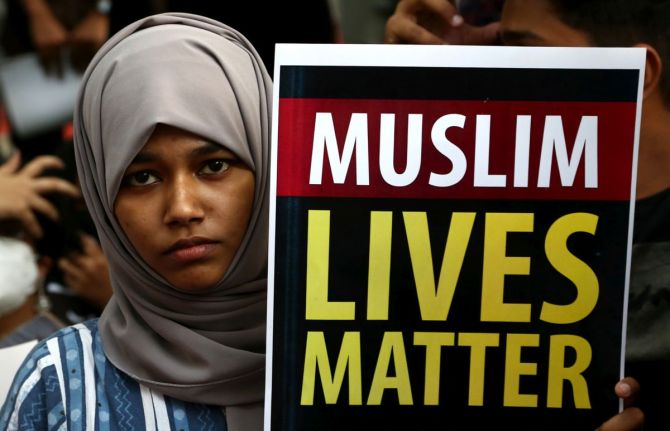 IMAGE: A student holds a placard during a protest organised by the All India Students Association and Muslim Students Federation against the rise in the alleged anti-Muslim violence and hate crimes in the country, at Jantar Mantar, New Delhi, April 16, 2022. Photograph: ANI Photo

New Delhi also hit back at Pakistan after its Prime Minister Shehbaz Sharif reacted sharply on Twitter to condemn remarks by Nupur Sharma and Naveen Kumar Jindal, saying the "absurdity of a serial violator of minority rights" commenting on the treatment of minorities in another nation is not lost on anyone.

Reacting strongly to remarks by the Organisation of Islamic Countries, External Affairs Ministry Spokesperson Arindam Bagchi said India accords "highest respect" to all religions and that the statement by the 57-member grouping exposed its "divisive agenda" which is being pursued at the behest of "vested interests."

The OIC also urged the UN to take necessary measures to ensure that the rights of Muslims are protected in India.

"We have seen the statement on India from the General Secretariat of the OIC.

"The offensive tweets and comments denigrating a religious personality were made by certain individuals. They do not, in any manner, reflect the views of the government of India," he said.

Bagchi said strong action has already been taken against these individuals by relevant bodies.

"It is regrettable that the OIC Secretariat has yet again chosen to make motivated, misleading and mischievous comments. This only exposes its divisive agenda being pursued at the behest of vested interests," he said.

"We would urge the OIC Secretariat to stop pursuing its communal approach and show due respect to all faiths and religions," he said.

Referring to criticism by Sharif and the Pakistan Foreign Ministry, Bagchi said the "absurdity of a serial violator of minority rights commenting on the treatment of minorities in another nation is not lost on anyone."

Bagchi said the government "accords the highest respect to all religions. This is quite unlike Pakistan where fanatics are eulogized and monuments built in their honour."

In a tweet on Sunday, Sharif condemned the controversial comments and alleged that India is "trampling religious freedoms and persecuting Muslims." The Pakistan foreign ministry also criticised New Delhi over the remarks.

Also on Monday, Pakistan said it has summoned the Indian chargé d'affaires to convey its categorical rejection and that the remarks are totally unacceptable and have not only deeply hurt the sentiments of the people of Pakistan but of Muslims across the world.

The comments by Sharma and Jindal triggered widespread anger in the Arab world as Qatar, Kuwait and Iran on Sunday summoned the Indian ambassadors. Saudi Arabia, Bahrain and Afghanistan also joined these nations on Monday to condemn the controversial remarks, stressing the importance of respecting all religious beliefs.

In a statement, Saudi Arabia's foreign affairs ministry expressed its condemnation and denunciation of the statements made by the BJP spokesperson, saying it insulted Prophet Mohammed.

The ministry reiterated its "permanent rejection of prejudice against the symbols of the Islamic religion."

It also rejected anything that gives rise to prejudice against "all religious figures and symbols."

While welcoming the measures taken by the BJP against the leaders, the ministry reaffirmed the "Kingdom's position calling for respect for beliefs and religions.

Bahrain's foreign affairs ministry also welcomed the BJP action, stressing "the need to denounce any reprehensible insults against the Prophet Muhammad PBUH, as a provocation to Muslims' feelings and incitement to religious hatred."

The ministry in a statement stressed "the importance of respecting all religious beliefs, symbols, and personalities, and the concerted efforts of the international community to spread the values of moderation, tolerance, and dialogue between religions and civilizations, and to confront extremist ideas that feed sedition and religious, sectarian, or racial hatred."

"The Islamic Emirate of Afghanistan strongly condemns the use of derogatory words against the Prophet of Islam (Peace be upon him) by an official of the ruling party in India," the agency quoted government Spokesperson Zabihullah Mujahid as saying in a tweet.

The Indian embassies in Kuwait and Qatar issued separate but identical statements on Sunday, saying the "offensive tweets" by individuals in India "do not, in any manner, reflect the views of the government of India", adding "these are the views of fringe elements."

Sharma's comments, made in a TV debate nearly 10 days back, and Jindal's now-deleted tweets also sparked a Twitter trend, calling for a boycott of Indian products in some Arab countries.