The Karnataka high court has suggested the possibility of some 'unseen hands' behind the hijab row to engineer social unrest and disharmony. 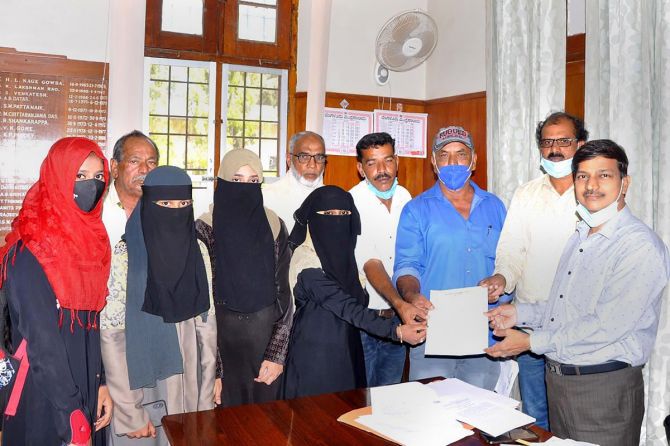 The court also expressed dismay over the issue being blown out of proportion.

"The way the hijab imbroglio unfolded gives scope for the argument that some 'unseen hands' are at work to engineer social unrest and disharmony. Much is not necessary to specify," the three-judge bench headed by Chief Justice Ritu Raj Awasthi said in the order.

The court, however, made it clear that it was not commenting on the ongoing police investigation.

During the course of hearing, some counsels had brought to the notice of the court the alleged involvement of the Campus Front of India and other organisations in inciting the Muslim students.

When the court sought to know, Advocate General Prabhuling Navadgi handed over a letter in a sealed cover to the bench.

"We have perused and returned copies of the police papers that were furnished to us in a sealed cover.  We expect a speedy and effective investigation into the matter and culprits being brought to book, brooking no delay," the bench noted.

The judges observed that all was well with the dress code since 2004.

It also said that they were impressed that even Muslims participate in festivals that are celebrated in the "Ashta Mutt Sampradaya" in Udupi where eight Mutts are situated.

"We are dismayed as to how all of a sudden that too in the middle of the academic term the issue of hijab is generated and blown out of proportion by the powers that be," the bench noted.

The court also declined to entertain petitions which had sought an investigation by the Central Bureau of Investigation and the National Investigating Agency as to the involvement of radical Islamic organisations and their funding by some foreign universities to Islamise India.

"There are other incoherent prayers. This petitioner opposes the case of students who desire to wear the hijab. Most of the contentions taken up in these petitions are broadly treated in the companion writ petitions. We are not inclined to entertain these two writ petitions filed in PIL jurisdiction, both on the ground of their maintainability and merits," the judges observed.