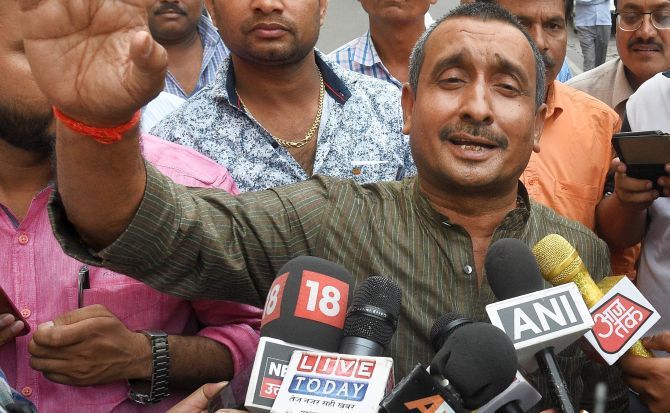 Police on Tuesday arrested Atul Singh, the brother of a Bharatiya Janata Party MLA, in connection with the gang rape of an 18-year-old woman in Unnao in Uttar Pradesh and the custodial death of the victim’s father, and a special investigation team was formed to probe the matters.

The Yogi Adityanath government in Uttar Pradesh has decided to withdraw a rape and kidnapping case against former Union minister Swami Chinmayananda, official sources said in Shahjahanpur on Tuesday.

A letter in this regard has been sent to the district administration on March 6 on behalf of the government, the sources said.

Subsequently, the Shahjahanpur administration had on March 9 written to the prosecution officer of the case for its withdrawal.

On the other hand, the rape victim has sent letters to the President and the district judge raising objections over the move, urging them for immediate issuance of a warrant against the accused.

Additional district magistrate (administration) Sarvesh Dixit said the state government has decided to withdraw the case filed against Chinmayananda in the Kotwali police station and the process for the same has been initiated by the prosecution officials.

The victim, in her letter, also said that Adityanath on a visit to Shahjahanpur, had a lunch at the house of the accused on February 25, 2018.

The first information report against the former minister was lodged in November 30, 2011, on the complaint of a girl who had spent several years at his ashram.

The girl had alleged she was kept at an ashram in Haridwar and raped by the former minister.

Her father had lodged an FIR against him at Kotwali police station in Shahjahanpur.

However, Chinmayananda moved the high court, which had stayed his arrest. The case has been pending since then.

"The SIT will go into the entire gamut of issues involved in the incident,” ADG (Law and Order) Anand Kumar said, after the MLA’s brother was arrested in Unnao.

The National Human Rights Commission also sent a notice to the Uttar Pradesh government and the state police chief seeking a detailed report on the custodial death of the victim's father and asked the authorities to ensure 'the aggrieved family is not subjected to further harassment'.

"Notices have been issued to the Chief Secretary and the Director General of Police, Uttar Pradesh, calling for a detailed report in the matter, including action taken against the delinquent police officials, who refused to register an FIR," the NHRC said.

The woman has alleged that she was raped by BJP MLA Kuldeep Singh Sengar and his brothers, and blamed the lawmaker for her father’s death.

The BJP MLA has rejected the charges as a conspiracy by his opponents.

The police officer said that so far a clean chit had not been given to anyone in the matter.

Kumar said the SIT would be headed by the Additional Director General of Police (Lucknow zone).

The Superintendent of Police (crime branch) will be a member of the SIT, which will look into various aspects of the case and accordingly take action against those found guilty, he said.

"The entire gamut of the complaint...will be factored in by the SIT and whatever legal actions can be taken, will be taken,” Kumar said.

The victim’s father died in custody in Unnao on Monday, prompting her to charge that he was killed inside the district jail at the behest of the lawmaker.

To a question about the possibility of any role of influential persons close to the MLA in the case, the ADG said, “The SIT will establish all that... As you know the SHO of the police station and five other policemen have been suspended on grounds of dereliction of duty and mala fide considerations. The entire issue will be reconstructed and whoever is culpable and whosoever has tried to shield any person will be taken to task.”

Kumar said that the death of the victim’s father did not take place in police custody.

“Whatever incident of beating up the deceased took place, it occurred in the village. The police in fact admitted him to the hospital immediately. But, whether there has been impartial and proper investigation, all these facts will be probed by the SIT, which will holistically probe the entire issue and the guilty will be booked,” he said.

Asked whether a clean chit had been given to the BJP MLA, the ADG said, “Nobody has been given any clean chit to anybody. The investigation by the SIT will establish the culpability of anyone and everyone who is involved in this episode and action will be taken accordingly. I can tell you that no guilty will be spared... The SIT will interrogate all the persons involved in this case including the MLA.”

Chief medical officer of Unnao, S P Chaudhary, said, “The death may have been caused by shock and septicaemia due to peritonitis (inflammation of the lining of the inner wall of the abdomen).”

According to a police spokesperson, a crime branch team arrested Atul Singh, the MLA’s brother, on the directions of the state police chief.

The NHRC observed that the allegations, if true, raised a serious issue of violation of human rights of the victim family.

"The incident was reported to have happened a day after the alleged rape victim tried to immolate herself near the chief minister's residence accusing BJP MLA Kuldeep Singh Sengar and his aides of gangrape," the NHRC said today and directed that the magisterial inquiry in the matter be expedited.

"The NHRC also expects from the DGP, an explanation for not communicating the custodial death to the commission within 24 hours. All the reports, including health screening report of the deceased at the time of his admission in the jail and medical treatment provided by the jail authorities, are to be sent," the rights panel said in a statement.

They have been given four weeks to respond, it said.

Earlier, four persons -- Sonu, Baua, Vinit and Shailu -- named in the FIR registered on April 4 for beating up the woman’s father had been arrested.

The complaint was lodged by the woman’s mother.

The woman’s father was arrested on April 5 under the Arms Act after he was allegedly beaten up by the MLA’s brother. 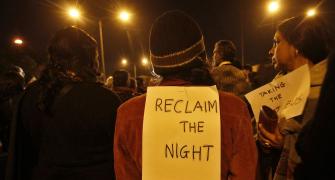