More domestic flights and passenger trains will be allowed in a calibrated manner, as the government issued guidelines for the month-long 'Unlock 2' beginning July 1, while educational institutions, metro rail services, cinema halls and gyms will remain shut. 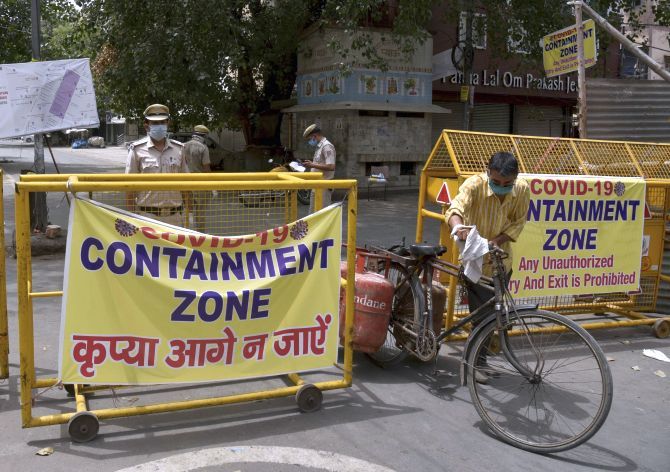 IMAGE: A worker pulls his cycle, loaded with LPG cylinders, past a barricade as police personnel stand guard at a COVID-19 containment zone in New Delhi. Photograph: Manvender Vashist/PTI Photo

Issuing the guidelines, the ministry of home affairs said the domestic and international flights (under the Vande Bharat Mission) and passenger trains have already been allowed in a limited manner and their operations will be further expanded in a calibrated manner.

The MHA said the new guidelines will come into effect from July 1 and the process of phased reopening of activities has been extended further.

"The new guidelines, issued today, are based on feedback received from states and Union Territories, and extensive consultations held with related central ministries and departments," according to the guidelines signed by Union home secretary Ajay Bhalla.

Night curfew shall remain in force, between 10 pm and 5 am, except for essential activities.

As stipulated in the 'Unlock 1' order and the guidelines issued on May 30, certain activities like religious places and places of worship for public; hotels, restaurants and other hospitality services, and shopping malls, have already been permitted from June 8 outside the containment zones.

Dates for opening of these will be decided separately, based on the assessment of the situation, the MHA said.

Lockdown shall remain implemented strictly in the containment zones till July 31.

Containment zones are required to be carefully demarcated by state and union territory governments with a view to contain the spread of COVID-19, after taking into consideration the guidelines issued by the ministry of health and family welfare.

Within the containment zones, strict perimeter control shall be maintained and only essential activities allowed, the MHA said.

Further, relaxations in night curfew have been given for seamless operation of industrial units in multiple shifts, movement of people and goods on national and state highways, loading and unloading of cargo and movement of people to their destinations after disembarking from buses, trains and airplanes.

Shops depending upon their area, can have more than five people at a time. However, they have to maintain adequate physical distance.

Training institutions of the central and state governments will be allowed to function with effect from July 15. A standard operating procedure in this regard will be issued by the department of personnel and training of the central government.

The MHA said after extensive consultation with states and UTs, it has been decided that schools, colleges and coaching institutions will remain closed till July 31.

Domestic flights and passenger trains have already been allowed in a limited manner.

Their operations will be further expanded in a calibrated manner.

International air travel of passengers has been permitted in a limited manner under the Vande Bharat Mission.

Further opening up will take place in a calibrated manner.

States and union territories, based on their assessment of the situation, may prohibit certain activities outside the containment zones, or impose such restrictions as deemed necessary.

However, there shall be no restriction on inter-state and intra-state movement of people and goods.

No separate permission in or approval or e-permit will be required for such movements.

National directives for COVID-19 management shall continue to be followed throughout the country, with a view to ensure social distancing.

Shops will need to maintain adequate physical distancing among customers. The MHA will monitor the effective implementation of national directives.

Vulnerable people like those above 65 years of age, people with comorbidities, pregnant women, and children below the age of 10 years, are advised to stay indoors, except for meeting essential requirements and for health purposes.

The use of Aarogya Setu mobile application will be encouraged, the MHA said.

Movement by passenger and 'Shramik Special' trains, domestic passenger air travel, movement of Indian nationals stranded outside the country and of specified people to travel abroad, evacuation of foreign nationals and sign-on and sign-off of Indian seafarers will continue to be regulated as per SOPs issued.

Spitting in public places will be punishable with fine, as may be prescribed by a state or UT or local authorities in accordance with its laws, rules or regulations.

As far as possible the practice of work from home should be followed. Staggering of work or business hours will be followed in offices, workplaces, shops, markets and industrial and commercial establishments.

Here are the guidelines for Unlock 2 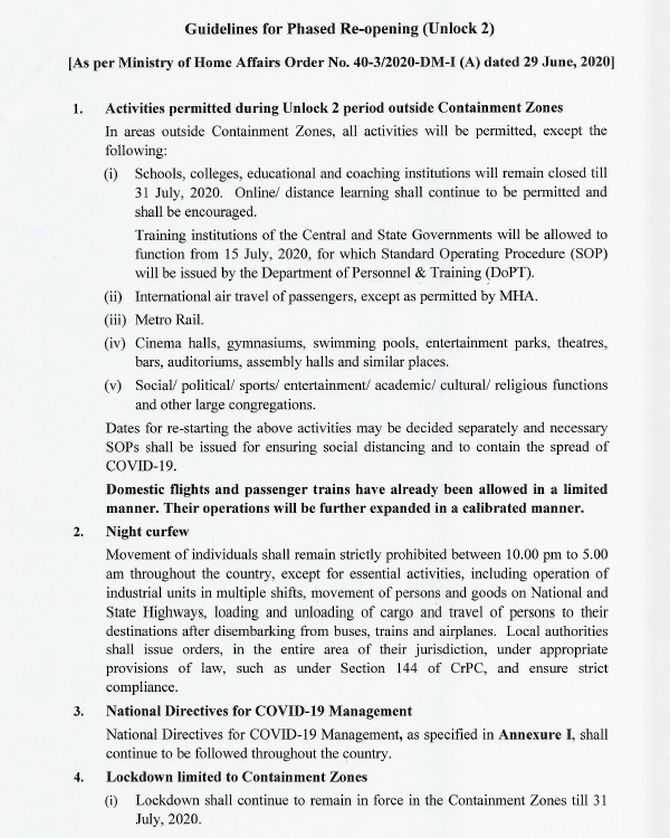 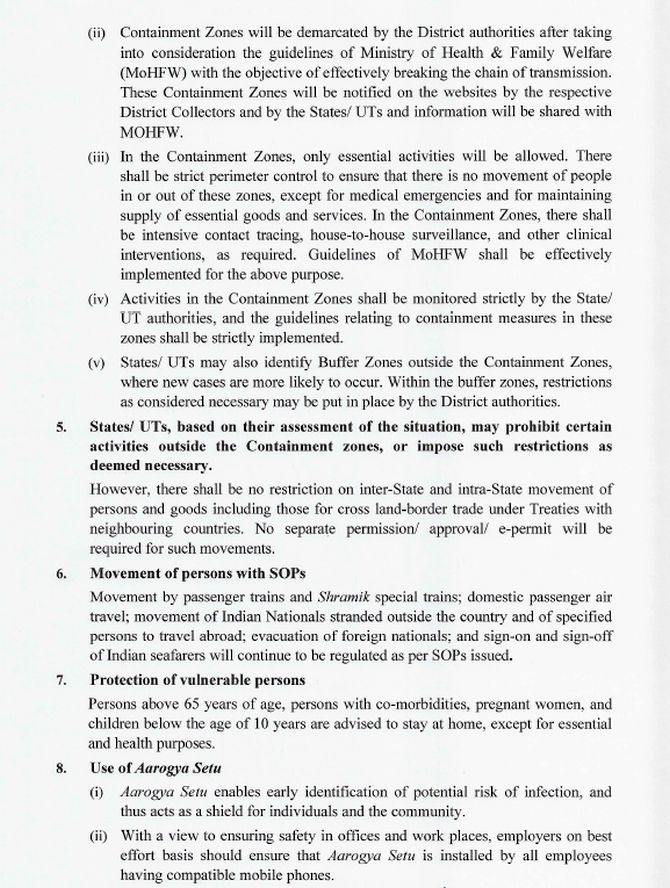 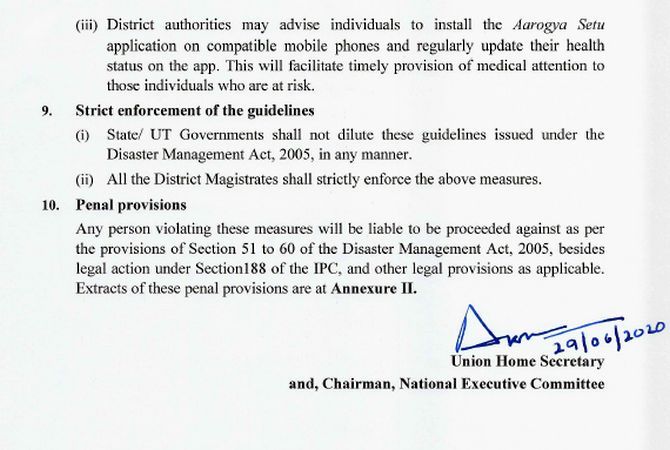