Facing a cutthroat poll battle in West Bengal, the Trinamool Congress on Wednesday said its chief Mamata Banerjee has written to non-Bharatiya Janata Party leaders, including Congress chief Sonia Gandhi, flagging the BJP's "assault" on democracy and alleging the Centre-state relations were at its worst since independence. Banerjee's letter is being seen as an attempt to portray her as a rallying point for all parties opposed to the BJP which has mounted an aggressive campaign to dislodge her from power in West Bengal after a 10-year rule. Before the TMC, the state was ruled for over three decades by the Left Front, which has now joined hands with the Congress to challenge both Banerjee's party and the BJP.

"I am writing this letter to you, and to several leaders of non-BJP parties, to convey my serious concerns over a series of assaults by the BJP and its government at the Centre on democracy and constitutional federalism in India," Banerjee said in the letter which was released by the TMC on Wednesday.

Referring to the passage of the National Capital Territory of Delhi (Amendment) Bill by the two Houses of Parliament, she said that it is an "extremely grave" development.

"With this law, the BJP government at the Centre has snatched away practically all the powers of the democratically elected government of Delhi, and vested them in the hands of the Lt Governor, a nominee of the Centre. The Lt Governor has been made the undeclared Viceroy of Delhi, acting as a proxy for the home minister and the prime minister," she said.

In her letter, she also said that despite losing to the AAP in both 2014 and 2019, the BJP was "unwilling" to accept the people's mandate.

"The BJP has chosen to govern Delhi by making the chief minister subservient to the Lt Governor. The National Capital Territory of Delhi (Amendment) Act is a direct attack on the federal structure of the Indian Republic, as enshrined in the Constitution. It also makes a mockery of the letter and spirit of democracy since it disempowers the people of the national capital.

"You will also agree that what the BJP has done in Delhi is not an exception, but is increasingly become a rule," she said.

She also alleged that the BJP government has been "brazenly and vindictively misusing" the Central Bureau of Investigation, Enforcement Directorate and other institutions against leaders and functionaries of non-BJP parties for its own partisan political ends.

Citing the examples of both West Bengal and Tamil Nadu, where Assembly elections are now underway, she accused the government of "unleashing" the ED to conduct raids on functionaries of the All India Trinamool Congress and DMK.

"Predictably, these institutions target only non-BJP leaders, and never those belonging to the BJP," she alleged.

The chief minister, who is fighting the assembly election in West Bengal from the Nandigram seat which goes to polls on April 1, also accused the government of "deliberately" withholding transfer of funds to state governments, especially those ruled by non-BJP parties.

"So that we face problems in implementing our development and welfare schemes to benefit common people," she alleged.

Banerjee also said that the move by the government of disbanding the National Development Council, Inter-State Council and the Planning Commission, and replacing it with NITI Ayog, is to "deactivate" every single platform where state governments used to traditionally place their legitimate demands, needs, concerns and views before the central government.

“The BJP has amassed unlimited resources from questionable sources, which it is using to topple duly elected non-BJP governments and to engineer defections in non-BJP parties.

"The Modi government's policy of reckless and wholesale privatisation of the nation's assets is also an attack on democracy because these assets belong to the people of India," she said.

Banerjee also highlighted how there is a "clear pattern" and purpose behind these developments and alleged that the BJP wants to make it impossible for non-BJP parties to exercise their constitutional rights and freedoms.

"It wants to dilute the powers of state governments and downgrade them to mere municipalities. In short, it wants to establish a one-party authoritarian rule in India.

"Overall, the Centre-state relations, and also relations between the ruling party at the Centre and opposition parties, have never been as bad in the history of independent India as they are now, and the blame for this rests squarely with the prime minister's authoritarian conduct," she said.

In the letters, she has urged the opposition parties for a "united and effective" struggle against the BJP's attacks on democracy and the Constitution.

"As the chairperson of All India Trinamool Congress, I shall work wholeheartedly with you and all other like-minded political parties in this battle. We can win this battle only with unity of hearts and minds, and by presenting a credible alternative to the people of India.

"After the conclusion of the ongoing assembly elections, I suggest that we deliberate on these issues and chart a plan of action," she said. 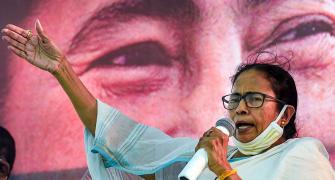 Will take action against attackers after polls: Mamata