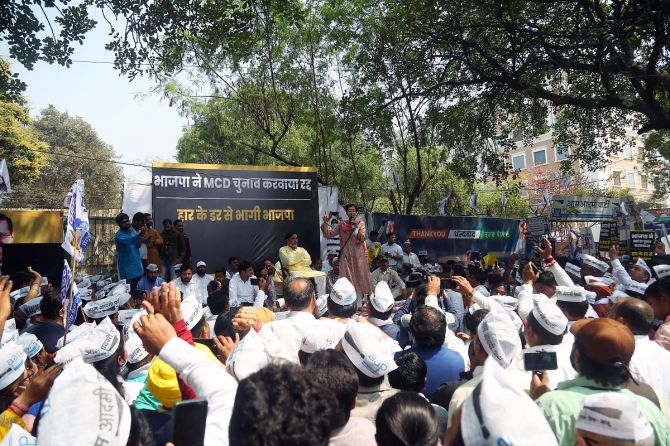 IMAGE: AAP legislator Atishi Marlena speaks at a protest rally against BJP over the postponement of the Municipal Corporations of Delhi elections, outside the party headquarters, in New Delhi, March 14, 2022. Photograph: ANI Photo

The MCD was trifurcated in 2012 during Congress leader Sheila Dikshit's tenure as the chief minister.

It is now reunified by merging the three civic bodies -- North, South and East municipal corporations.

With the special officer and the new commissioner taking charge, the exercise to reshuffle and reorganise the municipal staff will begin.

The erstwhile SDMC's central establishment department will act as the nodal department for the transfer and posting of officials and staff for the unified MCD.

According to municipal officials, Kumar will be the top authority in handling the civic affairs till a new House is elected.

He said providing the best civic amenities to the public and improving sanitation services will be among the focus areas.

"Sanitation is a basic and obligatory function of any civic body and its impact is always clearly visible on ground. So, my priority will be to further improve sanitation services in the city," Kumar told PTI.

Kumar's appointment as the special officer of the unified MCD is considered significant as he is expected to play a vital role in its functioning in the run-up to the civic elections.

A 1992-batch IAS officer of the AGMUT cadre, Kumar was the chief secretary of Puducherry.

He had recently been transferred to Delhi by the central government and was awaiting posting.

He assumed charge as the special officer at the Civic Centre, the MCD headquarters, on Sunday.

He had also served as the principal secretary of the Public Works Department in the Delhi government in 2017.

Bharti, a 1998-batch IAS officer also of the AGMUT cadre, was the commissioner of the South Delhi Municipal Corporation prior to this assignment, and he was the senior-most among Delhi's erstwhile three municipal commissioners.

Soon after assuming the charge, Bharti issued an order saying that erstwhile SDMC's Central Establishment Department will act as the nodal department for the transfer and posting of officials and staff for the unified MCD.

"My priority will be to provide the best municipal services delivered to the people of Delhi in a transparent manner," Bharti said.

Making the unified MCD financially stable will be among the key challenges before Kumar and Bharti, according to sources.