'I would like to express my anger at the way party affairs have been handled by some people.' 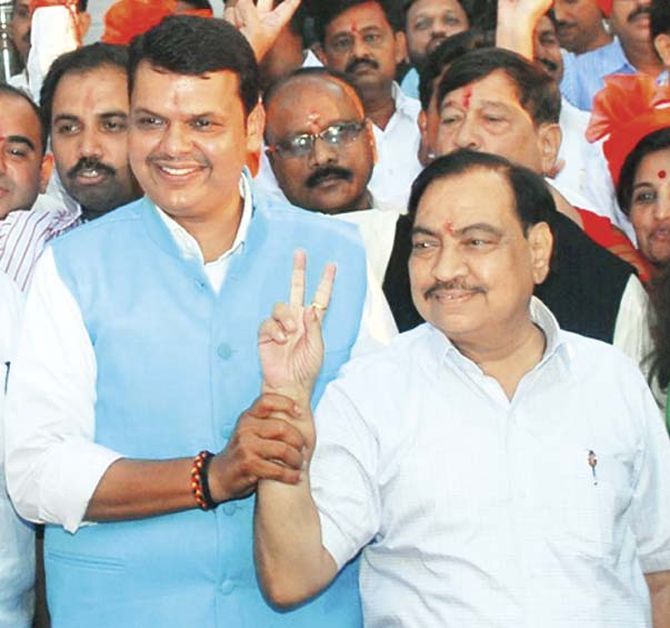 The BJP strongman from Jalgaon district and an arch-rival of former chief minister Devendra Fadnavis within the party was asked to resign as a minister after charges of land grabbing were levelled against him in 2016.

Since then, the BJP had steadfastly kept Khadse away from important party positions and divested him of all responsibilities.

While he was denied a party ticket from his hometown of Muktainagar for the 2019 assemmbly election, his daughter Rohini Khadse-Khewalkar was nominated from the same seat, which she won.

"I am not upset with the BJP; what can one achieve by doing that?" Khadse asks Rediff.com's Prasanna D Zore.

The news about Khadse quitting the BJP gained momentum soon after another party leader Pankaja Munde, the former MLA from Beed, removed the party's name from her Twitter bio and posted some very warm messages praising Shiv Sena President and Chief Minister Uddhav Thackeray soon after he took charge.

"But, yes, I am not happy with some people in the party and that is a fact," said Khadse, without naming Fadnavis who was chosen as the chief minister by Prime Minister Narendra Damodardas Modi and BJP President Amit Anilchandra Shah in 2014.

"I have no plans to quit the party for which I have worked so hard in the state," Khadse averred.

"This is not the time to say if it is the (former) chief minister or somebody else I am not happy with but I would like to express my anger at the way party affairs have been handled by some people," Khadse added.

Both the BJP and the Shiv Sena, Khadse said, should take responsibility for dashing the hopes of Maharashtra's voters who had voted for the Mahayuti (alliance) to form the next government.

"I will blame both the Shiv Sena and BJP for their failure to come to a common ground to form the government in Maharashtra when the people had made their mandate so clear," he said.

Discussing the BJP's plan to take on the newly formed alliance between the Shiv Sena, the Nationalist Congress Party and Congress, Khadse said, "I am no more a part of such a process and I cannot comment on how the BJP plans to take on the Sena-NCP-Congress government."

"Who am I to strategise on such matters now? I don't hold any position in the party, but I will continue to work for the party as an ordinary party worker," he said.

Khadse reiterated that the BJP did make some wrong decisions.

Without elaborating on what exactly these decisions were, Khadse said he has demanded a meeting of the BJP's senior Maharashtra leadership to take stock of political developments after the Sena-NCP-Congress came together to form a government and also discuss the reasons behind the party's success and loss in the state.

Among other things, the discussions will also centre on making amends for the mistakes the party might have made during and before the state assembly election.

Maharashtra BJP President Chandrakant Patil has assured Khadse that such a meeting will be held in a week or two once the dust settles down on the new government.