Union minister Ram Vilas Paswan's Lok Janshakti Party is deliberating whether to accept the Bharatiya Janata Party-led National Democratic Alliance's offer, which has left a section within the regional party unhappy, or go ahead with its plan to fight on 143 constituencies in the elections to the 243-seat Bihar assembly, party sources said. The party is likely to take a decision in a couple of days, with the nomination for the first phase of three phase-polls set to begin from October 1, they said.

Though there is no official word on the likely seat-sharing formula among the three NDA partners, chief minister Nitish Kumar-led Janata Dal-United, BJP and the LJP, sources said Paswan's party has been offered around 27 seats.

The JD-U was then part of the opposition alliance which had comprehensively defeated the NDA.

Sources said what has irked LJP leaders is that several seats on which they were keen that the party should contest do not figure among the constituencies on offer.

The LJP has also refuted reports that a few of its six Lok Sabha MPs are opposed to the party walking out of the NDA in the assembly polls and released a video message of its Vaishali MP Veena Devi in which she has favoured fighting on 143 seats.

LJP president Chirag Paswan has been lauding the BJP leadership, indicating that his party will not put up candidates against the saffron party even as it considers contesting on constituencies which will fall in the JD(U)'s quota.

The sources said the BJP has also offered the party some seats in the state's legislative council.

With the party's patron and Chirag's father Ram Vilas Paswan remaining hospitalised, the party's task to thrash out an acceptable seat-sharing agreement with its allies has become all the more difficult.

Chirag Paswan on Tuesday visited a temple in the national capital to pray for his father's quick return to good health.

The BJP on its part has maintained that the NDA is intact, and all its three partners will fight the Bihar assembly polls together.

The JD-U, whose equation with the LJP has been far from cordial, has refused to be drawn into any seat-sharing arrangement with Paswan's party.

The JD-U has said the LJP's alliance is with the BJP not with it. 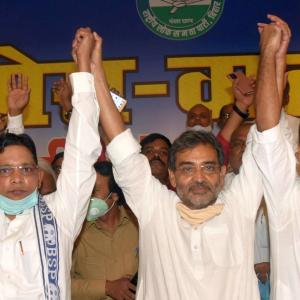