External affairs minister S Jaishankar on Tuesday discussed issues relating to Afghanistan and the Indo-Pacific during his bilateral meetings with global counterparts on the sidelines of the annual high-level UN General Assembly session. 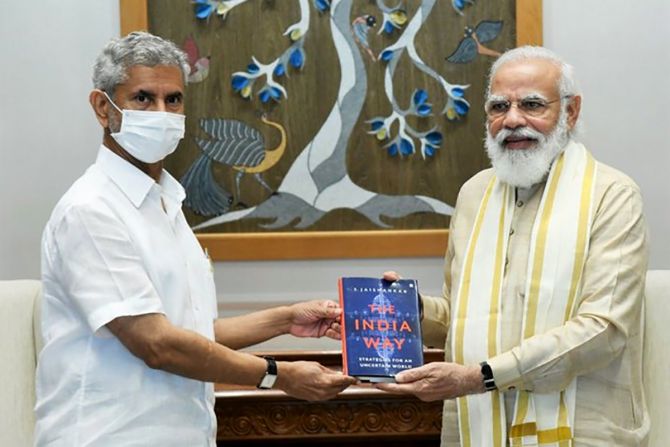 Jaishankar, who arrived here on Monday to participate in the high-level 76th session of the UN General Assembly, started his day with a meeting with French Minister for Europe and Foreign Affairs Jean-Yves Le Drian.

"Began the day meeting with our Strategic Partner France. A comprehensive discussion with FM @JY_LeDrian on Afghanistan, Indo-Pacific and other contemporary issues. India and France are solid partners in the UN Security Council," Jaishankar tweeted on Tuesday.

He then held a bilateral meeting with Iran's Minister of Foreign Affairs H Amirabdollahian.

"Good to meet FM @Amirabdolahian of Iran again. Continued our conversation on strengthening bilateral cooperation," Jaishankar said in a tweet, adding that the meeting "reaffirmed our convergence on regional issues."

Jaishankar met Egypt's Foreign Minister Sameh Shoukry in the UN headquarters on the sidelines of the UNGA.

"Good to meet FM Sameh Shoukry of Egypt. Agreed to take forward our bilateral cooperation. Exchanged views on the GERD issue and Afghanistan," he said.

"Met our Quad partner Australia. Took forward strategic conversations with FM @Marisepayne from our last meeting. Was apprised of recent developments in the Indo-Pacific," he said.

Jaishankar and senior Indian officials arrived in New York for the annual high-level UNGA session which returned to a more hybrid and in-person format this year after going virtual last year due to the COVID19 pandemic.

During the week, Jaishankar will meet his counterparts from several member states and participate in the G-20 meeting that will focus on Afghanistan and the G-4 Foreign Ministers meeting with focus on Security Council reforms.

The 76th UNGA session commenced from September 14 under the Presidency of Abdulla Shahid. The high-level week - the General Debate - commenced on Tuesday with US President Joe Biden addressing world leaders.

Prime Minister Modi will address the General Debate on September 25.

The Taliban seized power in Afghanistan on August 15, two weeks before the US' complete troop withdrawal on August 31 after a costly two-decade war. This forced Afghan President Ashraf Ghani to flee the country to the UAE.

The Taliban insurgents stormed across Afghanistan and captured all major cities in a matter of days, as Afghan security forces trained and equipped by the US and its allies melted away.

Thousands of Afghan nationals and foreigners have fled the country to escape the new Taliban regime and to seek asylum in different nations, including the US and many European nations, resulting in total chaos and deaths.