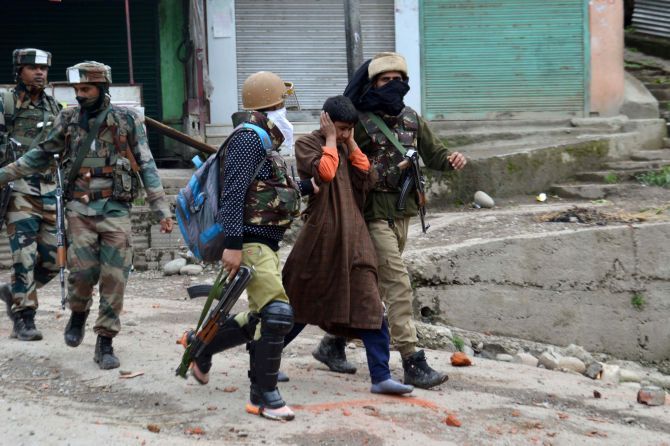 The United Nations on Thursday released first-ever report on alleged human rights violation in Kashmir and Pakistan-occupied Kashmir and demanded an international probe into it, evoking a sharp reaction from India which termed the document as 'fallacious and motivated'.

New Delhi also lodged a strong protest with the United Nations, saying the government is 'deeply concerned that individual prejudices are being allowed to undermine the credibility of a UN institution'.

'The report violates India's sovereignty and territorial integrity. The entire state of Jammu and Kashmir is an integral part of India. Pakistan is in illegal and forcible occupation of a part of the Indian state through aggression,' the Ministry of External Affairs said in a strongly-worded statement.

In its 49-page report, the UN's Office of the High Commissioner for Human Rights focused on both Jammu and Kashmir (consisting of the Kashmir Valley, the Jammu and Ladakh regions) and 'Pakistan-Administered Kashmir (Azad Jammu and Kashmir and Gilgit-Baltistan)'.

'We are deeply concerned that individual prejudices are being allowed to undermine the credibility of a UN institution,' the ministry added.

The UN also asked Pakistan to end its 'misuse' of anti-terror legislation to persecute peaceful activists and quash dissent.

'Impunity for human rights violations and lack of access to justice are key human rights challenges in the Indian state of Jammu and Kashmir,' the report said.

It said special laws which are in force in the state, such as the Armed Forces (Jammu and Kashmir) Special Powers Act, 1990 (AFSPA) and the Jammu and Kashmir Public Safety Act, 1978 (PSA), have created structures that obstruct the normal course of law, impede accountability and jeopardize the right to remedy for victims of human rights violations.

"Impunity for enforced or involuntary disappearances in Kashmir continues as there has been little movement towards credibly investigating complaints including into alleged sites of mass graves in the Kashmir Valley and Jammu region," it said.

The report has given a detailed account of protests and incidents of alleged excesses by the security forces since 2016.

The UN body said based on the findings in its report, a commission of inquiry should be established to conduct a comprehensive independent international investigation into allegations of human rights violations in Kashmir.

It also asked India to set up an 'independent, impartial and credible investigations to probe all civilian killings which have occurred since July 2016 and incidents of excessive use of force by security forces including serious injuries caused by the use of the pellet-firing shotguns'.

It also asked Islamabad to end the misuse of anti-terror legislation to persecute those engaging in peaceful political and civil activities and expressions of dissent, and amend the anti-terrorism act to bring it in line with international human rights standards.

The MEA called the report a selective compilation of largely unverified information and that it is 'overtly prejudiced' and seeks to build a false narrative.

The MEA said terrorism was the most 'egregious violation' of human rights and yet the authors of the report have conveniently ignored the pattern of cross-border terrorism emanating from Pakistan and territories under its illegal control.

'Cross-border terror and incitement is aimed at suppressing the will of the people of Jammu and Kashmir, disrupting its political and social fabric and undermining India's integrity,' it said.

The MEA said it was disturbing that those behind the report have chosen to describe internationally designated and UN-proscribed terrorist entities as "armed groups" and terrorists as 'leaders'.

'This undermines the UN-led consensus on zero tolerance to terrorism.

'The motivated report deliberately ignores that fundamental rights and freedoms guaranteed under the Constitution to every Indian citizen, including in the state of Jammu and Kashmir, are protected also by an independent judiciary, human rights commissions, free and vibrant media and an active civil society,' it said.

The MEA said India's protest and views in the matter have been conveyed unequivocally to the Office of the High Commissioner for Human Rights.

The Congress also supported the government's stand in dismissing the UN report, terming it a 'prejudiced attempt' by vested interests to hurt India's sovereignty and national interests.

Condemning the UN report, the opposition party said it needs to be junked as it has not taken into account the ground realities in Kashmir and has encouraged terrorists by terming them militant groups.

The report has been prepared without understanding the ground situation in Jammu and Kashmir, Congress communications in-charge Randeep Surjewala said and asked if the United Nations should overlook state-sponsored terrorism being exported on Indian soil by Pakistan.

"Jammu and Kashmir is an integral and inseparable part of India. We reject UN Human Rights Report as a prejudiced attempt by vested interests to hurt India's sovereignty and national interests," he said.

"Congress party supports the government's stand in dismissing the report," he added.

The UNHRC, the Congress leader said, prepared the report remotely with zero understanding of the situation in Jammu and Kashmir.

'How does the report justify terrorism by self styled militants of JeM and Hizbul Mujahideen? Should the UN overlook the state sponsored terrorism being exported on Indian soil by Pakistan?' Surjewala asked on Twitter.

Senior Congress leader Ahmed Patel echoed him and said the report was mischievous and misleading.

"We reject any such ploy to interfere in the internal affairs of India as Jammu and Kashmir is an integral part of India. Government deserves our full support to deal with the report."

Addressing reporters at the All India Congress Committee headquarters, Congress leader and former Union minister Rajeev Shukla also condemned the report and said the Congress party supports the stand taken by the government of India on the issue.

He also said terrorists cannot be termed militant groups fighting for their cause.

"I feel the United Nations report has been prepared without visiting the ground and I do not consider it right. The Congress supports the stand taken by the government of India... terming terrorists as militant groups and encouraging them should be rejected and condemned," he said.

The report is 'not right' and should be rejected outright, he said.

"We reject and condemn this report, which is completely uncalled for," he added.