'The Ganga must be kept above all divisive politics,' says Uma Bharti

Modi carved out a special ministry for the Ganga after he was elected prime minister, and appointed Uma Bharti to head the Ganga rejuvenation plan.

In an exclusive interview to Rediff.com Contributing Correspondent Rashme Sehgal, Minister of Water Resources, River Development and Ganga Rejuvenation Uma Bharti says the Ganga must be kept above all divisive politics.

"We have treated our rivers badly. Forty years ago, our rivers were not polluted. I remember both the Ganga and the Yamuna being very clean."

"But all that has changed now. Our forests that have existed for centuries are being cut down and our ground water levels are falling rapidly."

"The United Kingdom and Europe faced a similar problem of polluted rivers, but they have succeeded in cleaning them up, even the major ones like the Thames and the Rhine." 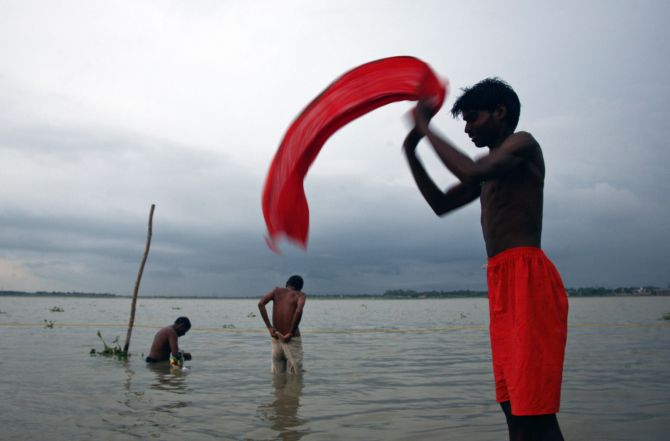 Image: A Hindu devotee dries his clothes after taking a holy dip in the Sangam, the confluence of the Ganga, Yamuna and Saraswati in Allahabad. Photograph: Jitendra Prakash/Reuters

"I have travelled to 80 countries and have seen how the West has dealt with the problem of river pollution. We can study their technologies and utilise the ones that best suit us."

One of the first steps Uma Bharti took as minister was to hold a 'Ganga manthan.' Spiritual leaders and Minister of Transport and Shipping Nitin Gadkari were invited to provide inputs on ensuring a continuous and clean flow of the Ganga from Gangotri to Ganga Sagar.

As a large number of sadhus sat along with environmentalists and activists to think of ways to solve the problem, Uma Bharti was criticised for calling a meeting with an implicit agenda of giving the Ganga restoration project a Hindutva flavour.

"Sant samaj does not refer to only Hindu spiritual leaders, but to spiritual leaders across all religions. I have always maintained that the Ganga must be kept above all divisive politics. Rivers may be a cause of dispute, but they have also helped bring states and countries together."

"One-third of the pollution in the Ganga is being caused by untreated industrial pollutants being dumped into the river. There is also untreated agricultural and domestic waste being released into our rivers."

"The Central Pollution Control Board has informed me that the stretch between Narora and Allahabad of the Ganga is the most polluted. And the reason is that several industries along this stretch release their waste water into the river."

Another major problem the Ganga faces is of water being diverted for agriculture from Hardwar in Uttarakhand.

Industrial effluents being released into the river may be lesser in quantity than household waste water, but the damage they do is greater." 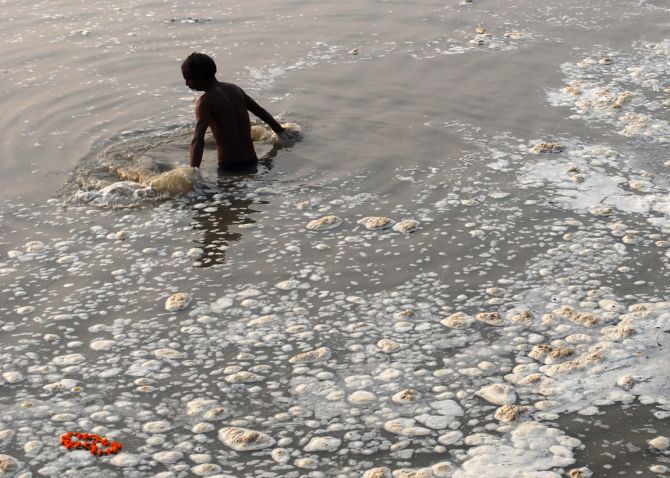 Image: A devotee takes a dip in the Sangam, the confluence of the Ganga, Yamuna and Saraswati in Allahabad. Photographs Jitendra Prakash/Reuters

In a meeting with owners of tannery units, distilleries and sugar factories, the minister was told that the industries were already treating the waste water before releasing it into the river. They argued against any real time effluent monitoring systems.

Bharti is not buying their argument.

"I want both the mother (Ganga) and the child (industries) to survive, but if I have to choose between the two, I will obviously opt to save the mother."

"I have to take all corporations and state pollution boards with me. I have said all along that it will take ten years for us to revive the Ganga."

Her optimism is not shared by the Supreme Court which came down heavily on her ministry in early September. It noted that at the rate at which work was progressing it seemed unlikely that the Ganga would be cleaned even after 200 years.

Uma Bharti promptly set a March 31, 2015 deadline for all polluting units to clean up their act. 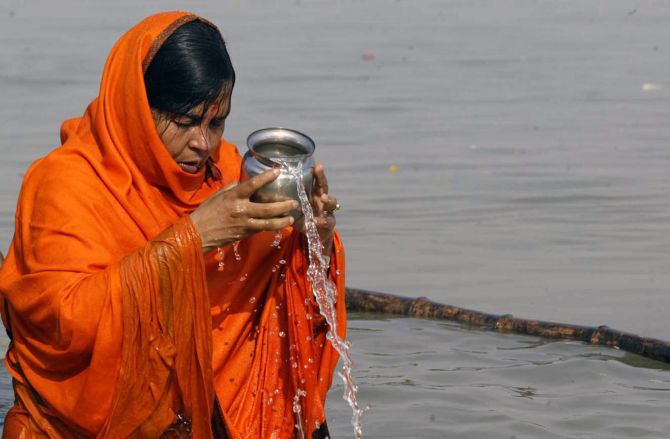 The finance ministry increased the cess on coal to create a corpus big enough to finance the Ganga cleaning project. In the last two decades, the government has already spent close to Rs 25,000 crore (Rs 250 billion) on cleaning the Ganga, but there has been little improvement.

"The prime minister has shown that a river can be cleaned up. He took Chinese President (Xi Jinping) to the Sabarmati river front in Ahmedabad. I am waiting for the day when the prime minister and other dignitaries can be taken to the Yamuna river. But today the water is so polluted even animals cannot stand in it."

Image: A vendor carries a basket of flowers as migratory birds fly over the banks of the Sangam. Photograph: Jitendra Prakash/Reuters

Uma Bharti is also keen on locating the mythlical river Saraswati and has sought the Indian Space Research Organisation's help.

Efforts to locate the river bed were made by geologists during British rule, with little luck.