Guard of honour for 20 bravehearts killed in Uttarakhand chopper crash 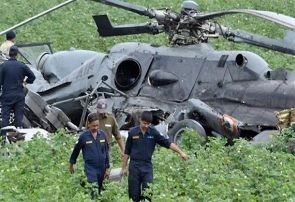 The 'guard of honour'-- a ceremonial mark of respect -- to the five air force, six ITBP and nine National Disaster Response Force personnel was led by Shinde. The NDRF personnel were from ITBP on deputation to NDRF.

The sophisticated Mi-17V5 helicopter of IAF had crashed in bad weather during a rescue mission in the flood-ravaged hill state.

Shinde said the nation would not forget the supreme sacrifice of these 20 brave men who gave their lives while rescuing thousands of people in the Uttarakhand floods. "The guard of honour to the 20 bravehearts is a little step from our side to remember their supreme sacrifice for the service of the nation. We offer our prayer to all those who lost their lives," he said.

Image: The chopper crashed during rescue operations in flood-hit Uttarakhand