A combative Rishi Sunak, the newly appointed Indian-origin Prime Minister of the United Kingdom, on Wednesday strongly defended the reappointment of Suella Braverman as home secretary, days after she was forced to resign over a breach of government ethics rules. IMAGE: British Secretary of State for the Home Department Suella Braverman exits Number 10 Downing Street on the day of a cabinet meeting, in London, on October 26, 2022. Photograph: Hannah Mckay/Reuters

Braverman, 42, resigned from the cabinet of former prime minister Liz Truss last week, having breached the ministerial code by sending secure information from her private email.

She was reappointed by Sunak on Tuesday, leading to growing calls for her resignation.

On his first full day as Prime Minister, Sunak met his new cabinet on Wednesday before facing opposition leader Keir Starmer in Prime Minister Questions (PMQs) in the House of Commons.

Labour Party leader Starmer initially welcomed Sunak -- the first Indian-origin British prime minister -- saying that it's a reminder that 'Britain is a place where people of all races and beliefs can fulfil their dreams'.

Then Starmer asked Sunak: "Was the home secretary right to resign last week for a breach of security?"

He noted that Sunak has promised to govern with 'integrity, professionalism and accountability', but points out that he has put in charge of the Home Office a woman forced to leave her job just a week ago.

"Have officials raised concerns about his decision to appoint her?" Starmer asked Sunak.

Starmer said that the post should be held by someone whose integrity and professionalism are beyond question and accused Sunak of doing a 'grubby deal' trading national security because he was scared to lose another leadership election.

Sunak then responded by thanking Starmer for his kind and generous welcome, adding that he knows they will no doubt have 'robust exchanges'.

On the issue of the re-appointment of Braverman as home secretary, Sunak said she made 'an error of judgment', but she had recognised that.

He said that he is delighted to welcome her back into a 'united' cabinet that brings 'experience and stability to the heart of government'.

Countering the Labour leader, Sunak said Braverman will be focused on 'cracking down on criminals' and 'defending borders', while the party in opposition (Labour) remains 'soft on crime' and in favour of 'unlimited immigration'.

Foreign Secretary James Cleverly has also defended the re-appointment of Braverman as home secretary, saying she has 'a very clear agenda' that the prime minister wants to see delivered.

Meanwhile, the Liberal Democrats have called for a Cabinet Office probe into Braverman's re-appointment as home secretary.

"Suella Braverman's appointment makes a mockery of Rishi Sunak's claims to be bringing integrity to Number 10," Liberal Democrats home affairs spokesperson Alistair Carmichael was quoted as saying by the BBC.

"There must be a full independent inquiry by the Cabinet Office into her appointment, including any promises Sunak made to her behind closed doors," Carmichael said.

Carmichael said that Braverman should be sacked if it is confirmed she 'repeatedly broke the ministerial code and threatened national security', adding: 'A Home Secretary who broke the rules is not fit for a Home Office which keeps the rules.'

Ian Blackford, the Scottish National Party's leader at Westminster accused Sunak of doing a 'sleazy backroom deal' with Braverman to get into 10 Downing Street.

In his response, Sunak alludes to a positive conversation with the Scottish First Minister Nicola Sturgeon on Tuesday and said he looks forward to working together 'for the people of Scotland'.

"I believe in a strong United Kingdom," Sunak was quoted as saying by the BBC.

It remains to be seen how Braverman's tough stance on immigration will square off in the new cabinet after her remarks about Indian visa overstayers caused much damage to the ongoing India-UK free trade agreement (FTA) talks.

Sunak has pledged to govern with 'integrity' and has tried to unite the Conservatives by including people from different wings of the party in his top team.

Braverman, the London-born daughter of a Goan-origin father and Tamil-origin mother, resigned from the role seven days ago, having breached the ministerial code by sending secure information from her private email, and left with scathing remarks about Truss's government.

H S Rao
Source: PTI© Copyright 2023 PTI. All rights reserved. Republication or redistribution of PTI content, including by framing or similar means, is expressly prohibited without the prior written consent.
Print this article 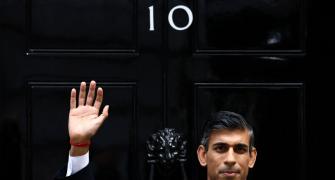 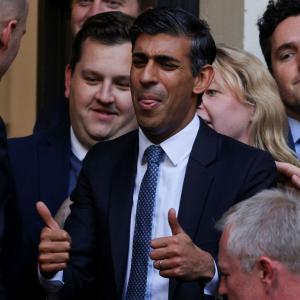 Nations With Hindu Heads of Government