UK heads for 'coalition of the losers' 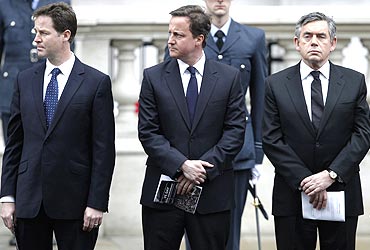 The Tories and Liberal Democrats edged closer to a deal on coalition formation that might result in Conservative Party leader David Cameron enter Downing Street, even as reports emerged that United Kingdom Premier Gordon Brown had launched a last-minute bid to woo kingmaker Nick Clegg.

But though the Lib Dem leader had promised to talk to the Tories first about a power-sharing agreement, details emerged of a clandestine meeting between him and Brown in the Foreign Office. The rendezvous took place just a few hundred yards from the 'official' talks between the Tory team and their Lib Dem counterparts.

Quoting Labour sources, The Daily Mail claimed that Brown was mounting a desperate eleventh hour bid to "throw a spanner into the works" and sabotage the Tory-Lib Dem talks. The tabloid claimed that Brown and Clegg had an hour-long discussion and the Labour leader was reportedly attempting to trump Cameron's offer by promising more electoral reforms, and by offering the Lib Dems up to six seats in the Cabinet.

As the horse-trading continued, financial markets braced for a meltdown as UK was left rudderless, prompting fears that both shares and the pound will take a battering. The two parties have identified common ground on deficit reduction measures, taxation, civil liberties and the environment but the issue of voting reform -- totemic for the Lib Dems -- remains a significant stumbling block.

Cameron was warned by Tory Right-wingers not to give too much ground to the Lib Dems or face an open revolt. Clegg -- under mounting pressure from his anti-Tory Left wing -- was said to have given himself another 24 hours to try to hammer out a coalition agreement with the Tories, before telling them to form a minority government.

Chancellor Alistair Darling, meanwhile, was powerless to resist an EU deal which could leave taxpayers with a 43 billion pound bill to bail out the failing euro.

Tory and Lib Dem negotiating teams met in the Cabinet Office on Sunday for six hours to discuss an end to the political deadlock hanging over Britain following the first hung parliament in 36 years.

During the negotiation, Shadow foreign secretary of Conservative party William Hague and Chris Huhne for the Lib Dems attempted to thrash out a deal that will determine Britain's future.

The delegations emerged without finalising an agreement, but in an attempt to reassure the markets, said they had agreed that economic stability would be the key to any deal. As no party has won an overall majority, the prime minister can remain in his post until he decides to resign, but he is facing open demands from his own party to quit.

Half the Cabinet is understood to have given up hope of clinging to power in a 'coalition of the losers', which could include Labour, the Lib Dems, Northern Irish Members of Parliament, and Scottish and Welsh Nationalists. And there are increasing signs that many ministers doubt such a deal would be desirable, even if it could be achieved.

H S Rao In London
© Copyright 2022 PTI. All rights reserved. Republication or redistribution of PTI content, including by framing or similar means, is expressly prohibited without the prior written consent.